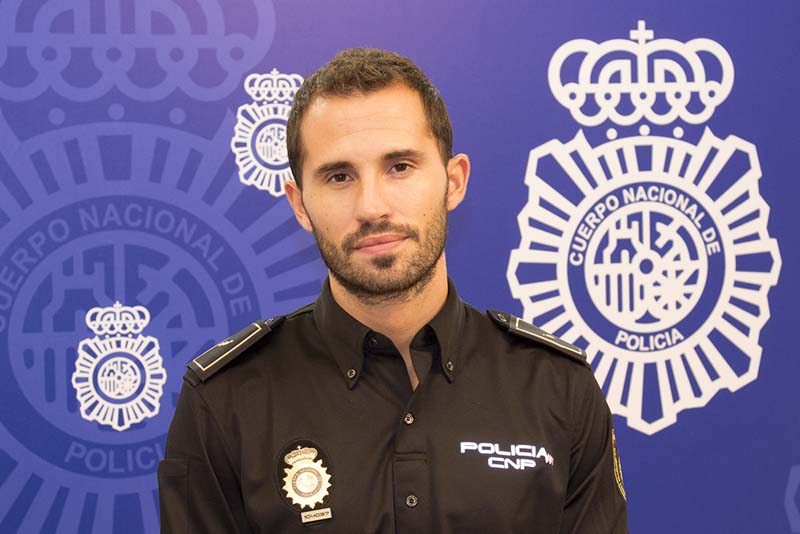 ‘We have the highest number of followers in the world, after the FBI. 650,000. We don’t follow anybody.’ That doesn’t sound too good coming from a policeman, but in this case it’s okay: he’s talking about Twitter.

‘What do you tweet?’
‘That we have found a criminal, for example, or arrested somebody.’

‘Does it help?’
‘Yes. But we want it to go both ways: we want to inform the public, but we want them to help us too. And it works: we have arrested 50 major drug dealers thanks to the information given through the social media. In the future it will be 80% of the police work, I’m sure.’

‘Citizens become informants,’ I say. ‘They played the same role in countries like the DDR.’
‘When we started this, we took this into consideration, but we thought it would be alright. Since then we have received about 50,000 emails from citizens.’

‘And the press did not object, nobody asked questions?’
‘No, they didn’t.’

We’re in Victor’s office, on the second floor of a somewhat run-down building in the centre of Madrid. One half of the room looks like the kind of office we recognise from TV series: a few desks, piles with paperwork, iron lockers and a gun holster hanging over a chair. The other half is a miniature TV-studio: a blue wall, a big switchboard and studio lamps. Victor is a press officer with the Madrid police; this is where he does his stand-ups or interviews. And apparently where he receives famous guests. One of the many pictures on the lockers shows him with Xavi, the captain of the Spanish national football team.

‘Ah, the campeones. We were doing a campaign with them against internet crime.’
Victor, 32, started working with the National Police in 2006, after graduating from the university, where he studied journalism. Initially he worked on the street, with the immigration unit, then in security, and finally he joined the press team.

‘From the moment I started thinking seriously about my country, society, about my people, I knew I wanted to join the police in order to help other people.’

He looks good in his uniform; his shirt neatly ironed, his boots polished.

‘You’re a press officer, why do you carry a gun?’ Press conferences can’t be that dangerous.
‘Because I am an officer.’

‘Also when you’re inside?’
‘I’m in uniform because of the interview. I’m also proud of my uniform; I took me many years of preparation to become an officer,’ he says, touched.

‘Is your father also proud?’
‘Yes, though at first my parents didn’t like it: my mother thought it was dangerous, because of the risks. Now they know it’s my life’s work. ’

One of Victor’s colleagues, two desks away, goes online. I can tell, because I recognise the sound of going online from the early days of internet at 3 kb/s. The Madrid Police may Tweet, but at what speed?

‘What is the status of the police? If the king is the highest, and the criminal the lowest, where do you stand?’
‘The king is always the most valued institution, and the police are right under the king, historically.’

I fail to detect any irony in that statement.

‘Why is that?’
‘Well, our job is to help the citizens, to help and protect.’

‘Is the Guardia also this popular?’ The Guardia Civil is the much feared police operating in the country, while the Policia Nacional works in the cities.

‘Yes, I think so. And we are successful: according to the crime statistics we are always the 3rd or 4th lowest in Europe.’

‘Why? Are people so much more honest here?’
‘I would have to say it is a combination of the the people and the police.’

‘The economic crisis is more severe here than in other countries. Has it changed your job? Have crime rates gone up?’
‘I’m not in a position to talk about that. You should ask the ministry of interior affairs, they collect all the data.’

Victor had agreed to be interviewed, but when he read the topics I wanted to discuss, he said that he didn’t want to talk about political issues. Europe, for instance. So I start carefully: ‘Where would you live if not in Spain? Portugal?’

‘Not far away. I consider myself an international person. I’ve seen a lot of countries.’

‘Do you like Spain?’
‘Yes, of course, it’s my country, what else do you expect me to say?’

Well, the truth, I think. ‘But are there things that could be improved?’
‘I like everything. The weather, the food, the way of living, our mentality, the beautiful places in Spain. I invite everybody to come to Spain,’ he says, talking to an imaginary camera. He laughs.

I try Europe. ‘Is Europe important now?’
‘Of course. We tend to work together as one European police force in Europe. We already have lot of cooperation, through Interpol and Europol, criminals travel, are transnational, so we have to cooperate.’

There’s a lot of criticism of Europe. Is it justified? All these new countries, is that a good thing?
‘I’m not the person to answer.’

‘What about the ETA? They have become less violent.’ The day before our interview  a judge had ordered the release of one important ETA prisoner, in compliance with European law. In the newspapers and on television many Spanish people reacted with outrage.
‘Well,’ carefully choosing his words, ‘I can say that they have not killed for several years. That’s information, that’s data. I can say no more.’

‘Shall I show you the rest of the office?’