City #25, January 2015. The world speaks English, but London speaks world: everyone comes to London, including tourists from every corner of the world, and masses of immigrants. There are immigrants on the bottom rung of society but also on the top rung, where they prefer to be called expats. London is the urban version of Noah’s ark and each group has its own neighbourhood: the Arabs in Bayswater, next to the Greeks, the Chinese in Soho, the French in South Kensington (in terms of population, London is the sixth largest French city.) It was difficult to arrange interviews: everyone is incredibly busy, and they tend to be reserved, at least the English are.

Type of Youropeans: as expected, they are not the biggest fans of this club, but our perception is skewed; London and Great Britain are not the same. London is very cosmopolitan and the City, its financial heart, benefits from the European connection. 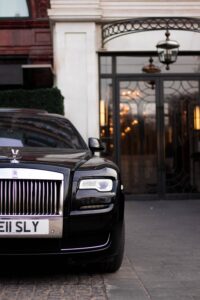 Tuesday morning, around 9, Pembridge Square, Bayswater. Claudia Schiffer gets out of her Porsche Cayenne, opens the back door for her son, who kisses his mother goodbye before he runs off to join his friends, one of
whom one is Elle MacPherson’s child. All nonchalantly wearing their Weatherby School uniforms. Look, there’s David Beckham and his three sons. Although the other parents are less famous, they are scarcely less glamorous, and probably just as rich.

In 1994 I spent a few months in London, working as an intern at a bank. While the city has never exactly been provincial, the difference between then and now is staggering. Chelsea, the football club, is a good indicator of the shift that has taken place. The once impoverished club known primarily for its unruly fans is now owned by a Russian billionaire; it has a world-class stadium and the team is a cosmopolitan collection of successful millionaires, only one or two of whom are English.

The English have also been driven out of the unaffordable centre of the city. Many low-paid workers such as nurses, cleaners and teachers now have long commutes, sometimes up to three hours. The Arabs have been around for awhile, the Russians for the past ten years, and now the Chinese armada is sailing up the Thames and buying up who blocks of buildings. You see them jogging in Hyde Park, and taking their children to eye-wateringly expensive schools, ‘the best in the world’.

The city, like Chelsea FC, welcomes the arrival of new money and foreign talent. It even gives them a tax break. And so the price of real estate goes up and up. Penthouses can fetch a hundred million. ‘Since I moved here, rents have gone down, but I should have bought my house every year,” old friend sighs. The end is still not in sight, because no matter how big the city is, there is still a shortage of good houses, while the British legal system is still the safest harbour for fortunes that were not always come by honestly. Take the Greeks: in 2009–2010, the depth of the crisis, they topped the list of buyers of houses worth more than a million pounds…