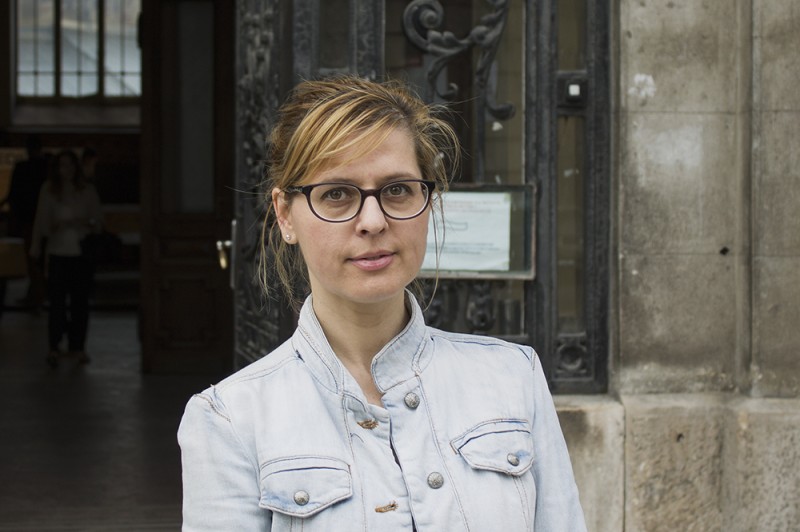 Dilmana’s hair is tied back in a messy pony tail, allowing a bit of blonde hair to fall onto her face. Once in a while, her long fingers carefully tuck these escaped locks behind her ears. She is wearing a jeans jacket and a pair of glasses with a prominent black frame. As with most other Eastern European women, Dilmana clearly takes good care of herself. But not too much; she wants to be judged on her art, not on her appearance.

‘I try to be an independent artist, but it’s hard,’ she explains, casually throwing her green bag on the windowsill as she sits down. ‘Either way, you have to be part of a system to be able to apply for funds. You have to talk to the right people, go to the right events. In this time of financial crisis you have to be careful not to find yourself in a place where you’re compromising all the time. I don’t want to prostitute myself and my ideas when doing commercial projects; this is exactly the period where I say: what matters to me? Recently, we did a project for the national museum. We developed an application for people with poor sight. It didn’t even feel like a commercial project, because we had to interpret a painting through sound. It had a specific target, a specific location. For me this is not compromising, it’s something that I really liked. But I don’t work with every party that offers me money.’

Dilmana is co-founder of KOTKI Visuals, an art collective combining different forms of art with technology. The members or KOTKI create interactive installations, work for different festivals and even do VJ-ing. ‘We use different forms because to me, art is more about the message than about the form. We are now doing a performance combining choreography and technology. I wouldn’t call all of what we do “art”, some of it is more commercial. I’d call myself a live media artist, because a lot of what we do is happening in real time.’

‘You have a right-wing government now. Is the government good for culture?’

‘Absolutely not. This is actually the first government that really doesn’t care about culture. Romania has a very nice cultural institute, which was established by King Carol and has representatives in many countries. The last director was actually a very intelligent man, who built a very dynamic cultural network. He worked together with a lot of festivals, representing contemporary art and promoting different art forms. Unfortunately, the institute fell under the government, who decided it wanted to take back control. They fired the director, even though a lot of people protested against this. Since then, several directors followed, some of them truly idiots. Today, they mix opera with contemporary dance, opening theaters and closing others. Just to control the situation and promote obscure people with huge budgets.’

‘Why would they promote such obscure people?’

‘Because they’re friends with somebody influential and because they promote Romanian culture and old icons.’

‘So the system is corrupt?’

A long silence. Dilmana takes a sip of her Seven-up. ‘To me it is. This government is one of the worst when it comes to support for cultural programs.’

‘Is there any support left, then?’

‘There’s some stuff. There’s a mayor’s fund that supports art projects in the capital. Also there’s a national institution, funded by lottery money. Apart from that, the government is not too generous. The real problem though is that the private sector doesn’t support culture. They only support it when it comes to big events, and even then it’s always connected to politics. It takes a lot of hard work to persuade the companies to support the smaller festivals, because “only” 300 people will come. You have to do good PR, get introduced here and there before you get funded. It’s hard work.’

While we talk, the music in the bar we’re in is somehow getting louder and louder. The sound reverberates off the high ceiling, which is painted as an almost exact replica of the Sistine Chapel. The clientele is young and artistic, drawn in by the Romanian Design Week which is being held in the same building. It’s the kind of big event that doesn’t have to work hard for support. I have no idea whether a political party is involved with the organization. But sitting in this bar, it’s hard to ignore the Peroni beer advertisements hanging on every wall. Politics takes on different forms.

‘In The Netherlands, a few governments back they promoted something they called “cultural entrepreneurship”. The government urged artists to think about how they could attract a bigger audience, to examine whether they thought their work would really interest people.’

Dilmana shakes her head dismissively. ‘But then we have to ask ourselves: how educated is the public? If you want to attract more people, you have to educate the public. The Romanian public is uneducated. The real art projects only flourish in the niche. It’s the same art-minded people that keep coming back.’

‘Are you happy to be an artist now? Is the struggle for funds affecting you?’

‘Sometimes it is. When we started to organize our own events, it was really hard work: organizing, finding funds, booking artists, negotiations with agents. After a while, it starts to affect you. My friend would call me on a Friday night, and all I could think was: what does he need from me? Of course, he didn’t need anything from me; he just wanted to know how I was doing! And then I realized that I wasn’t enjoying what I was doing. I missed the joy, the pleasure, the creative part. I felt that I needed some time to go back to the basics, back to what I like to do. Art is a process, it needs time.’

‘Don’t you think that maybe Western society is not designed for such a process? It doesn’t have the time or the patience for it.’

‘Absolutely. I think that we need to find a balance; maybe I have to realize that I’ll never be rich. Apparently this is not the time to make money with art. You make more money with PR, or by being in the right place.’

Dilmana shifts position in her chair, causing the old wooden floor beneath her to creak. In the corner of the bar a man is working behind his MacBook. The atmosphere of the place reminds me of other hip European cities, like Berlin or Paris. ‘Do you feel European?’

‘Yeah? What does that mean?’

‘I can adapt to anywhere I am, maybe it comes from the education I had. Travelling a lot, you adopt a lot of beliefs and customs. Many Romanians don’t have that, they think that Europe is the center of the world, somehow. When you travel outside of Europe, you realize that it’s not.’

‘Yes, when you’re outside you can look back. But what is typically European, then?’

‘I guess the fact that our collective culture is shaped by whatever happened in Europe in the last 2000 to 5000 years. If you look at our educational system, it’s absolutely clear that I was shaped by the ancient Greeks. And all the wars we’ve had among us, we can never escape the influence of our neighbors. We as neighbors shape each other’s history and future. It makes us different from the US and Africa.’

‘Ok, you shape each other.’

‘Yes, exactly. You can speak Italian with an Italian, but also with a Swiss person. In Romania we speak a Latin language, even though this is the language of Catholicism. After every 1000 km, you can encounter a different language with different beliefs, but we’re one big family. It’s cool.’