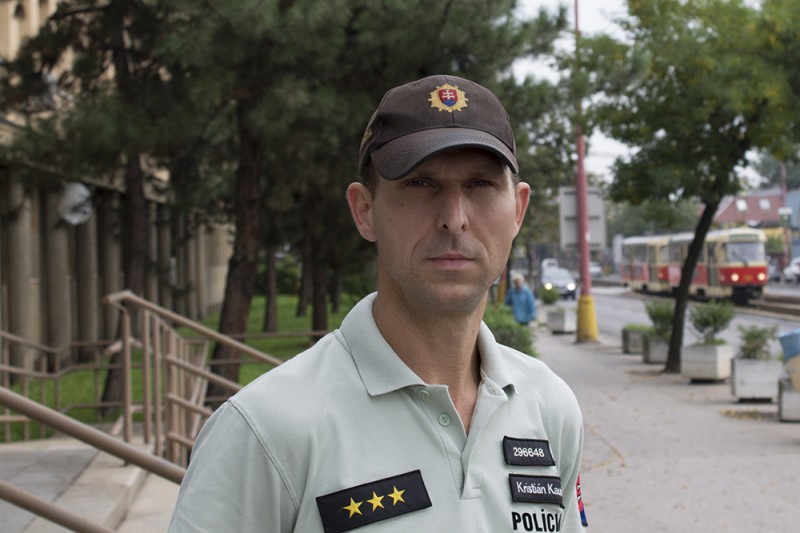 There is quite a crowd in this office on the second floor of the police department: Martin, the press officer and Veronika, the interpreter are seated on one narrow couch, Christian, the policeman I am supposed to interview, and I are on the other, and a chief, a stern woman in her fifties, looks down on us from a slightly higher chair.

‘We have 20 minutes,’ Leonora translates the words of the chief – not exactly the answer I expected to the question ‘Are you the Head of Communications?’

Now a lieutenant at 33, Christian tells me that he joined the police in 2001.

Christian, who is tall and quite skinny, gives an elaborate answer, but Leonora keeps it short and simple: ‘He always wanted to join the armed forces.’

Why, I ask again. And again – it would be one of the more peculiar interviews in this Youropeans-series. ‘He wanted to serve his country, it was a childhood dream.’

You are a lieutenant; will you become a commissioner soon? I ask to the man sitting next to me, while the others watch or make notes of what’s said.

‘I don’t have a university education, I’ve already gone as far as I can,’ Christian says, while his bony fingers toy with the cap lying on his lap.

Isn’t it difficult, knowing you can’t climb any higher?

‘No, I’m happy to work with people, happy to work on the street.’ And not very happy right now, clearly there were many places he’d rather be than here in this office.

Why did Martin select you for the interview?

‘Well, I just received a call, they told me I should be here.’

I ask him about the two bronze statues next to the main entrance of the building, one of a soldier holding a machine gun, the other of a woman in uniform, looking up to the sky, both Communist relics. Does it match the image of the police now?

The interpreter talks, the press officer writes and the chief is suddenly paying attention.

‘I don’t know,’ Christian says. ‘The police have changed. My task is to serve and to protect. And to help people.’

And were the police more repressive before 1991?

He wasn’t working here then, I should ask someone else…

Maybe he has heard stories from older colleagues, I try again.

But why do you think the statues are still there ? Don’t you think they remind the people of Bratislava of a time they would rather not be reminded of?

‘I don’t know the history of the building,’ he says.

I ask the chief, but she doesn’t know either.

What is the image of the police now? Are they popular?

‘It is always difficult, because of course we also do unpopular things like fining people who commit traffic offenses. And that is what most people see, the worst side of police. It is easier to be a firefighter, because they are always seen helping in difficult situations.’

I suggest the use of social media, to ‘reach out’ to the people, or Facebook, where people actually can become friends with the police.

‘We provide information, it is not about communication,’ the press officer says.

Silence in the room.

‘I am a different person when I’m off duty,’ Christian continues, changing the subject.

On holidays, do you look at colleagues in other countries, how they operate?

Sure, I do. I take pictures of them. I pay attention to their technique, to the badges, to the uniforms.

Do you see a difference?

‘Pfff. The basics are the same.’

Do people address you with du or sie?

‘They use the polite form, in normal situations. But when we arrive at a fight or something, people aren’t always that polite, especially when they’re under the influence of alcohol or drugs. We are always polite to the public.’

What about Europe, have you seen a lot of countries?

‘I’ve been to Austria, Croatia, Czech Republic, Hungary, Ukraine. I worked on an exchange programme with the Croatian police.’

How has Slovakia’s EU membership changed your job?

He loosens up: talking about his job is more his cup of tea.

‘We cooperate more nowadays. Crime has become more anonymous, more complicated. And because of the open borders it often happens often that the crime takes place here and the offender goes abroad.’

What should we do about it?

‘It is up to the politicians to find a solution.’

‘No, I don’t have time for that. I’m not truly interested, but I hear it on the news.’

Did you vote in May?’

‘I was working then,’ he laughs – it seems he works a lot.

Only 13% of the population voted, maybe all the others had to work too that day?

Now they all laugh a bit.

Do you feel European? Slovak?

‘I feel European. We are in the middle of the continent; we are close to borders with a lot of countries. We have a common history.’

This situation in Ukraine. Does it frighten the Slovaks too?

Because you have a gun!

‘I’m the one who should be afraid, because if war comes I will have to stand up, but I think it is far away. We are safe in Europe. Europe is safe.’

Then the chief gets up and offers me presents: a notebook, stickers, a bag full.