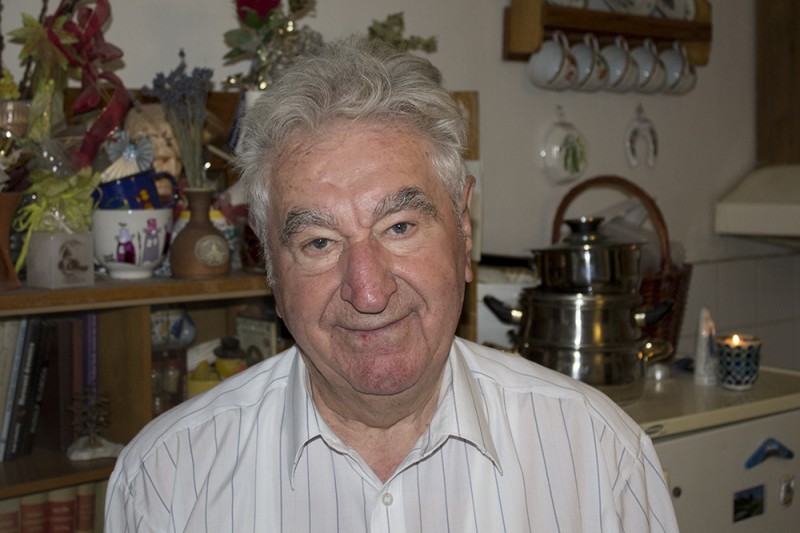 He performs at pop festivals, where thousands of people listen to him. No, he is not a singer, not a rock star. Anton Srholec is an 85-year old priest. Famous in Slovakia, he has moral authority, a man who truly walks his talk. First imprisoned, then sent by the communist regime to a labour camp in 1950s, he spent 10 years working in uranium mines, simply for being a theology student. Later he was allowed to be ordained as a priest, but when he became too popular in his Bratislava parish (‘A legend,’ Father Anton says), the communists exiled him to small villages. Throughout his entire – and very long – life he has been obstructed by the authorities, beaten up or falsely accused by the secret police, prevented from preaching by the communists and ex-communicated by the Catholic authorities. ‘Ah, these communists,’ Father Anton boasts, ‘in camp they made me one of their watchdogs. It was necessary, because a saying in Slovak is ‘He who hasn’t stolen for one hour, is stealing from his family’, so the communists asked priests to keep an eye on things, because they trusted us not to steal. The irony…’

He gets up from the kitchen table in his small two-room apartment, just a kitchen and a bedroom. The kitchen also serves as a guest room, and an Irish nun, a dear friend of Anton’s, sometimes comes over to sleep on the small bed next to the refrigerator. ‘Do you want some wine?’

He serves it from a 2-litre Coca Cola-bottle. ‘It was bottled by my brother.’ And since I have already been rude enough to refuse a piece of the cake he has baked especially for me, I drink the wine.

A spiritual leader, well known and loved by many (‘ah, it’s nothing… when I walk on the streets, they say ‘hello Antonio’ or ‘good day sir Srholec’). His first big performance was in 1985, only a couple of years before the wall fell. ‘It was an event commemorating the 1100th birthday of an important Slovakian, and it was attended by almost 200,000 Czechs and Slovaks. A minister spoke about how this man had brought us culture, but the crowd shouted, chanted, “and brought us faith!!!” to the embarrassment of the minister. That night someone had provided me with a megaphone and that night I spoke – illegally of course.’

He tells about the dark days of communism, about the cold war – he could do so for hours – at least as long as there was something left in the Coca Cola bottle. ‘The soviets had destroyed our dream of more liberty. For decades we had been oriented towards Moscow, but we wanted to belong to the West. We have always been faithful to the west, for centuries. That was an important struggle, who would govern the world, the USA or Russia? In the 1960s, when the cold war was at its peak, atom rockets were pointed at Vienna, 50 kilometres away. The Soviets made peace with weapons, I preached the truth of Jesus – illegally. The Catholic Church was suppressed, but the Orthodox Church, the Russian church, was supported because it acted like a 5th column. The main difference between the Orthodox and the Catholic church is that the former is very sentimental, while the western church is influenced by ancient Greece heritage, by logic and discussion. In church as well in politics, the Orthodox feel that Russia should rule the world.

That world has changed in recent years, and not always for the good. ‘During the Soviet days we dreamt of democracy, of values like respecting your neighbours, and living modestly, but people don’t know now, they behave like a dog released from its chains. What I see now is a lot of egoism, arrogance, money, money, money… I’m shocked to see how it is now. I’m from a family of seven children. Rich in children, not in money. Now they have big houses and are materialistically oriented. Big cars. Where was this need hidden all the time?’ He looks sad, this old but powerful man, with a voice like a clock. And another thing, war and terrorism: ‘Twenty years ago aggression used to come from a single person, now it is organised. With the IS for example.’

Why do they go and join, these youngsters?

‘They are unhappy with our way of life, I think. I remember how Christian men killed one another because they were from the other side of the river. And in de 2nd World War I met people who really believed that Hitler – and later Stalin – had the right ideas.’

How was it for Slovakia to join the EU?

Are there European values?

We are a bit averse of old values. Values don’t fall from heaven, they are in our bodies, we know what is good and bad. Christian values are human values. Christians had learned values. Before there were values – water, nature, trees, places where they gathered. When Christianity came, it included those existing values.

But Asia doesn’t speak those songs yet, that’s why we need dialogue. The Christian values needn’t be spoken so openly. We should continue our dialogue with non-Christian religions, like the Islam, or India, or Russia, the Orthodox Church. We should pay attention not to speak about the Bible all the time; we should look for consensus, to what we have in common. My God doesn’t require uniformity. You know, the Bible is not a law, but a piece of life. In it we can learn from Jesus, try to live as he did. I pray 24 hours a day – I pray with my words and actions, everything I do is to the glory of the Lord.’ And so he prays for me, at this Bratislava kitchen table.

In 1989 he turned 60, old enough to go into retirement. ‘I thought, finally I will use my free time, to travel and read, but then, at the end of the year the wall fell. I have been busy, running ever since. Helping to build democracy. Teaching. It is a new era for me. Not serving the government or the church, but for myself. ‘

As a retiree, Anton is actively involved in numerous social organisations. The Slovak Helsinki Committee for the rights of minorities, for example, or the Slovak section of the Society for Science and the Arts or the Confederation of political prisoners. In 1992 he set up a shelter for the homeless in Bratislava.

When the interview is over, it ’s raining heavily in Bratislava and since there is no public transport nearby, Anton offers me a ride in his car back to the city centre. And he drives well, fast and safe, even without glasses. A legend.