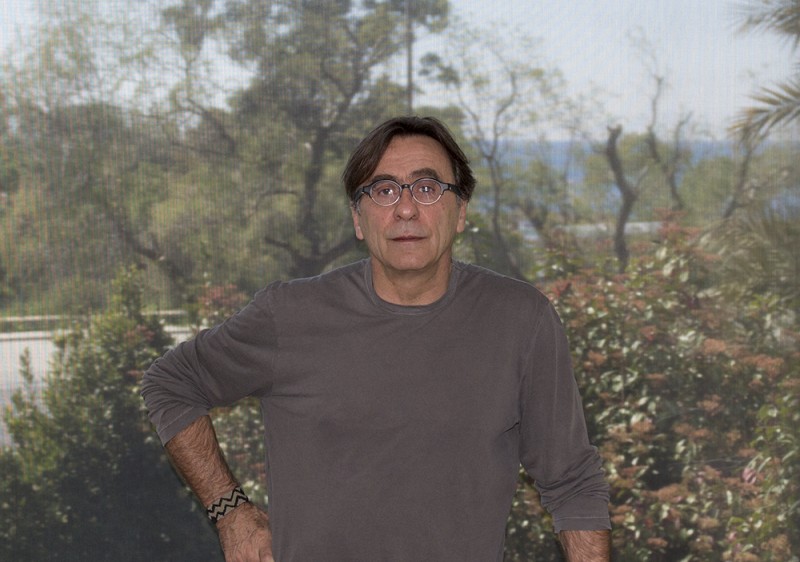 He reckons that out of ten million Greeks, some four million have seen it, his YouTube-film. What do you think it is about? Does it show him diving off the Acropolis? Singing a duet with Robbie Williams? Scoring a penalty for Panathinaikos? No, it is a 30-minute coverage of a speech at a conference, about rebranding. Rebranding Greece.

Peter Economides is 54 years old. Although his name is Greek, he was born and raised in South-Africa, and only returned to Greece, the country of his ancestors, ten years ago.

He lives in a very nice apartment near the sea, just outside Athens. A new and modern place, filled with contemporary art and beautiful furniture, including a Rietveld-chair and one designed by Philip Starck. This particular Greek is not in crisis.

Nor is his country, he says: ‘Look outside, do you see crisis?’ I see the blue Mediterranean Sea and some islands on the horizon. ‘The country isn’t, the people are, but more than an economic crisis, this is a social crisis. It is an identity crisis. It’s the way I feel about myself. And it has become worse since the beginning of the crisis. The Greeks feel pressure to become more northern European. But a Greek will never be a good German. Impossible. He can be a superb Greek, but he has to find himself in order to do so.’

‘The northern European definition of being European, the Calvinist approach predominates?’

‘Yes, it is the protestant ethic. If you look at this part of the world it is very different.’

‘It is, but at the same time Greeks are known to be hard workers.’

‘Are they?’ Peter asks me, peering over his glasses.

‘People tell me they are.’

‘They work long hours, but they don’t work very productively.’ He gets up, walks to his kitchen to fetch a bottle of olive oil, nicely designed. ‘Beautiful, isn’t it? Only Greeks could produce this.’

‘Let me take you back a bit. The essence of this country is the appreciation of life. Greeks live hard. Over the years an image has evolved of a lazy Zorba character, living on a island, drinking ouzo, philosophizing all day. It’s the stereotype of the Greek. The essence however is not a lazy person, but someone who is touch with what life is all about. I think that is what the Greek has got deep in his DNA. It is why Greece has so many civil servants: the aspiration has always been to get a job that offers security, but more importantly one that leaves a lot of free time to live hard. And number two,’ Peter says, while lighting a small Davidoff: ‘We’ve turned our backs on a lot of who we are. The moment all the European funds started to flood into this country, we became European consumers, instead of producers. And we sold our olive oil at two Euros a litre to the Italians. Who bottled it nicely and sold it for 25 dollars in New York. The only thing we wanted to do was get rid of the olive oil so we could go and live hard. So we left all of this tradition behind us and started consuming with easy money. Prada, Porsche, Gucci, you name it. Then all of a sudden the financial crisis hit and the rug gets pulled out from underneath them and Greeks say “oops, what has happened to me”? So what happens: 60 to 65 % unemployment among kids, 28% unemployment generally. The government has not provided an alternative vision. I think it’s a big, big problem. They look at this social crisis in economic terms. They increased taxes and took all kinds of economic measures, instead of planting a vision for people.’

‘You have been talking about the brand Greece but what do you think of Europe as a brand?’

‘Look, the US is the Marlboro Man: it is about opportunity, about going out and conquering things. Europe is about diversity. It is a great brand, but we have to beware. I remember going to Siena, twenty years ago. I’m in the Piazza del Campo and I’m surrounded by the essence of Italy: beautiful architecture, Italian ice cream shops, restaurants and Italian people walking around like Italians. Last year I was there again and what do you see? Levi’s, Nike, McDonald’s and Starbucks. So we’re losing that diversity.’

He lights another Davidoff, stops his lecture for a minute.

‘You know what the problem is in Europe? Politicians are out of touch with the most important part of the electorate: with the younger people. Who are not consuming politics in the way our parents did. Politics used to be about public speeches, but also getting out and getting in touch with the population. Today kids are hanging out on social media. I don’t know any politician except Obama who has really got to grips with social media. Instead of investing your money in television, which nobody is watching, why not put all that money together and create a pan-European, interactive platform for true democracy?’

‘Exactly, a return to the agora. But they are scared of it. So that is something that the EU should do. Give room and create a platform. Now we have bureaucrats and technocrats in Brussels; we need visionaries.’

Final subject, final questions to a local celebrity. ‘Do people recognise you?’

‘Yes. It is very strange. Last week, in Budapest of all places somebody asked for my autograph. She said they studied me at her university.’

‘It must be nice for the Greeks to have someone who is so successful come back to Greece. It proves that they are in the right place.’

‘Yes, and the other thing that inspires them, is that I run a global company from here. I have clients in Holland, Turkey. It proves to them that you can be here and still work worldwide.’