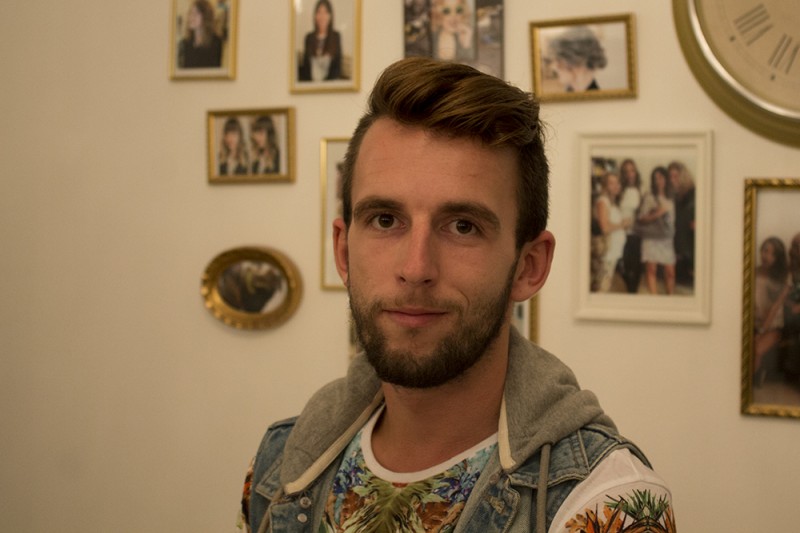 We meet at Ivy’s, a hair and nail salon in the centre of Zagreb. It’s half past eight, and Pejic has just finished his working day. He sits in his chair, chatting with his lover, Arsen. ‘It is my dream to have my own salon,’ Pejic tells me. ‘It will not look like this,’ he laughs, and looks around. ‘No. I want something that looks like a workshop. More industrial. I want something different, because in Croatia, everyone does the same thing. They copy. Everyone just goes along with the trends.’

‘He thinks people in Croatia wouldn’t understand his salon,’ Arsen says. ‘Like, this kind of shop people understand. They walk around the city and are attracted to it, because it is beautiful and everything. But his dream is maybe too different for them.’

Pejic brought his lover along to translate and complement his story.

What is the attitude in Croatia towards gay people?

Arsen: ‘Well, I have been living here for six years and I can see that it has changed in the past two years.’

Has it become better or worse?

Arsen: ‘Better, better. But it has become more polarised. People are against or pro, there is no middle ground. And the opinions about it are more visible. But a lot has changed. Six years ago during the gay pride event in Zagreb there were a lot of police and special forces surrounding the parade. But last year, there was no police. So it’s gotten better. On the other hand: there was a referendum last year about gay-marriage. The government wanted to make same-sex marriage possible, but the opposition was very against it. Then one party changed the state constitution, so we now have a paragraph that says marriage can only be between a man and a woman. We can have a civil partnership now, but we can’t get married. The whole process was a bit degrading.’

When did you become a hairdresser?

Pejic: ‘I became a hairdresser 8 years ago, when I was 18 years old. I went to a school for hairdressers and immediately started working. I’ve been dreaming about becoming a hairdresser since I was little. A lot of people think you are ‘just’ a hairdresser, but actually a hairdresser is something like a psychologist. You gain special skills, including how to talk to people, because when you touch and cut someone’s hair, you have to create a picture of that person. See what type of person it is. I am not going to give a haircut that doesn’t suit with the type of person.’

When we start talking about traveling, Pejic’s eyes start to sparkle and he smiles, thinking of one particular European city: London.

Pejic: ‘I feel like I am not from here. Sometimes I wonder, why was I born in Croatia? Especially when I go to London. People in London are individualists, they don’t follow trends as Croatians do. They have their own style.’

You felt at home?

Pejic: ’Yes! People are so different in London. They live, and they like to work. Everything in London is so fast. People work for 10 or 12 hours a day, but afterwards they go out and enjoy their hard-earned money. They go out, have fun. But here, you don’t earn anything and there’s not a lot of places to go out.’

You’re part of the European Union now, you can live and work there.

Arsen: Yes, Germany, Great Britain and Spain enforce this ban. You can work there for a period of two years, up to a maximum of five years. But you have to find an employer that is willing to give you a job, and he has to submit a paper that says they don’t have someone like you in their country.’

And what do you think of this rule?

Arsen: ‘In a way I understand it, but for us it is really fucked up.’

And what do you think of Croatia being a member of the EU?

Arsen: ’Nothing has changed. People must change, before things start to happen. Because everybody thinks, ‘we’re in the European Union and everything is going to change.’ But it’s not like that. People in Croatia are lazy. They don’t adapt to change very well. Maybe that is because of communism. At the time, you knew you had a job, and you’re probably going to work hard at the same factory for the rest of your life. You got paid, education was free. The government gave you an apartment. You didn’t have to work for anything. Croatia took the worst parts of capitalism, and stuck with the worst parts of communism.’

What is the worst part of capitalism?

Arsen: ‘Materialism. And, the bosses don’t treat their workers very well. People work 8 or 10 hours a day, but they don’t get paid for all these hours.’

Pejic: ‘It is different with hairdressers. We get a commission for each customer we bring into the salon. But there are a lot of salons where they pay the minimum wage, and you get another part black.’

The two men are not that positive about their country. And it seems they’re not the only ones of their generation wishing they could go abroad and work somewhere else.

Arsen: ‘People in Croatia have lost hope. They don’t feel like they can change anything. The young people in Croatia are just looking to go abroad. I read that Spain has the biggest rate of educated people, but also the most unemployed people. But it’s basically the same here. We have a well-educated workforce working jobs far under their level.’

What effect did the war have on Croatian people?

Arsen: ‘The problems in Croatia are now justified by the war.’

Arsen: ‘Yes, an excuse. The war was 20 years ago, but what have you been doing for the last 20 years since the war ended? Like… I can understand that it was tough for 5, maybe 10 years after the war. But 20 years…?’

But you are both in your 20s, you’re strong and intelligent men. Maybe it is your time to change the country?

Pejic: ’I think most people, young people, old people, really can’t do this. Because you can’t change the government. Everyone in Croatia who gets power, uses it to his one advantage. Not to help others. You have to change the whole system. One person can do well, but there are a whole bunch of people who already have power and are staying in power. So you can’t really make a difference. You need to change it from the core.’