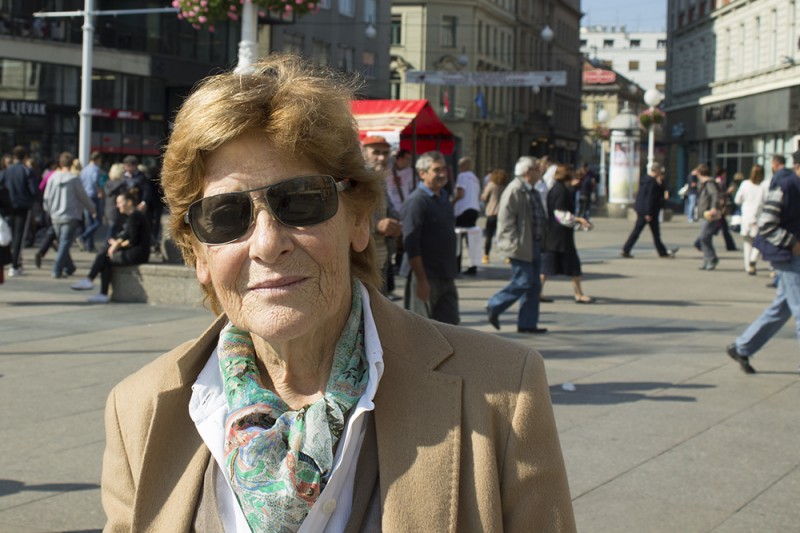 ‘You know,’ Mara tells me, ‘in your mind, it is not only the Romanians live in poverty: we are also a second-rate country. You see us as an undeveloped country, and that is a big mistake. The people who went to a country in the western part of Europe were mostly uneducated people. Very poor people. What you have seen are not average Croatian people.’ Discussing this point, Mara becomes indignant. ‘How do we know you have this image of us? Because, for example, we are never on any board or featured in any editorial. We are not chosen for the top jobs. In my field , and I am only speaking about medicine now, the Western countries don’t judge me on what I, Mara Dominis, have done. For them, I am Mara Dominis for Croatia. And I am lumped together with all the incompetent people, because my address is in Zagreb.’

We are sitting on Jelicic Square, in the heart of Zagreb. This where you meet: under the clock, or under the horse’s tail, at the monumental statue of Josip Jelicic, Croatia’s great general. We are sitting at a sidewalk café, two tables away from the mayor (‘Do you still need a local celebrity? He’s over there,’ Mara said).

‘I always wanted to be a doctor. I couldn’t think of anything else. Members of my family were mostly lawyers. My father was a lawyer, my sister is a lawyer. So I am an outcast in a family of lawyers.’ Professor Mara Dominis is 73 years old, still as sharp as a knife, and a former professor of pathology and cytology at the School of Medicine in Zagreb. She still works as a pathologist in one of Zagreb’s public hospitals. ‘I retired, but I am still working part-time. I like to be busy for 2 or 3 hours a day.’ Professor Dominis has travelled to the States and several European countries, to study, research and attend conferences. ‘We were one of the communist countries that were free to travel abroad, which was not possible for the Hungarians or the Czechs. We could travel and go around. It was difficult, but still we were free to move around. I think it was the greatest thing.’

Do you think there are a lot of differences between doctors throughout Europe?

‘I think the difference is that, for example in your country, you have more money for the machines, the doctors, the salaries, than in my country. When I have a sick patient, I will do everything to help, make a diagnosis, will find out what is going on. But compared to your country, I will get ten times less money to do so. I know we can’t compare the economic potential of the Netherlands and Croatia, but this is the main difference. Therefore many of my colleagues are now going abroad. It will be a very big problem. I think both countries produce good doctors, but when you are not paid and treated accordingly, it is difficult.’

Croatia is one of the few European countries that experienced a war in recent years. ‘During the war, Zagreb was more or less peaceful. There were bombs, but there were not many victims or much damage. However, at the hospital, we had a lot of people from the front. It was very sad to see young people without legs.’

‘In the big cities, there is no trace of the war. Cities have been rebuilt. But if you go inland, you can see small villages completely destroyed. Still. Close to the Serbian border, there are still ghost villages where nobody lives.’

‘Before the war, I had friends from all over the country: Bosnians, Macedonians and Serbians. It has changed a lot, especially with the Serbians. The war was a very, very unfortunate event. You are not aware of what people you have known for a long time are capable of doing. My mother was a young woman in the Second World War. She always told me, ‘you never experienced a war’. And I told her, ‘well, okay I hope I never will!’ But after what happened, I understand what she was telling me. You find out you don’t really know what people are like, how they can behave and how they can change. So it is an experience, but one you can live without. You don’t need it. But now I’ve had this experience, I can image what is going on in Ukraine, because it is similar to what happened to us.’

One of the reasons we founded the EU is to prevent the continent from going to war again. Saying this I see Mara vigorously shaking her head. You are shaking your head. Do you think it doesn’t help?

‘I don’t think so, you know in Europe you have this tension between England and Scotland, Basque country and Spain, the Flemish and the Walloon regions in Belgium.’

Do you think that the Union is not enough to prevent the continent from going to war?

‘No, I don’t think so. Because, you see, you are an old member of the European Union. We are the youngest one. The economic difference is so big, and you are used to living by the European rules. We have just started to learn to live according to European rules.’

But are there shared Europeans values?

‘Truly, I think that this Union is so artificial. The nation still is very important, and more important than the Union. You are Dutch, and I am Croatian. This Union will not change that. The roots are so deep. We can stay together because of the economy, better communication, etcetera. But I think in Europe, the feeling of national belonging is so strong. And that will not change so quickly.’