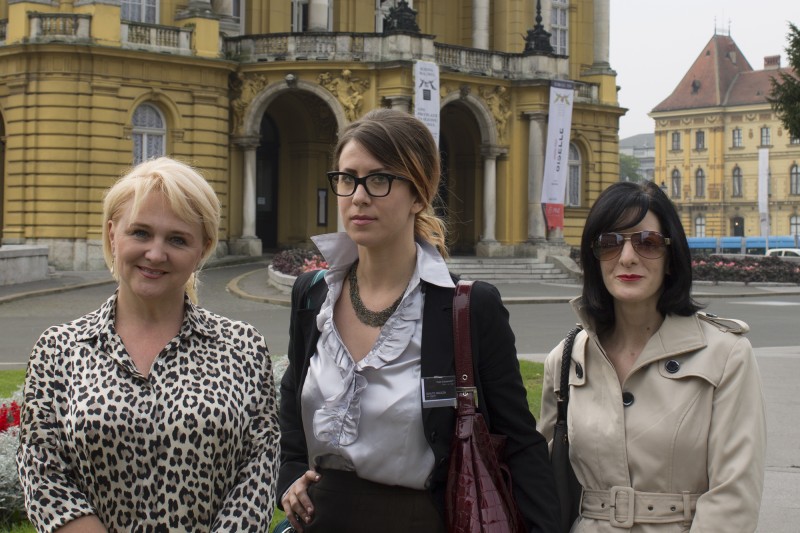 And at the end of the song, she was supposed to hit a high C – and she did of course, because she is the best soprano in Croatia – but still, it’s not easy performing for two hundred million TV viewers. It was the 1995 Eurovision Song Contest and Lidija Horvat-Dunjko joined the Croatian group Magazin in a one-off collaboration to finish in 6th place (have a look!).

I had met her the previous day, at the opening of the new Academy of Music. Quite prestigious: the president was there, and of course Lidija too. Two Croatian journalists, Clara Clappendorf and her lovely assistant, both as colourful as they are pretty, introduced me to her, set up the interview and even offered to translate. And so we met the next day, in the lobby of hotel Dubrovnik.

What is it like to be famous in Croatia?

‘Being a celebrity in the world of classical music was okay, but it changed completely when I became known because of my performance at the Eurovision Song Contest. Which is quite sad, to be honest…’ Lidija, now 47, was already a diva, having debuted at the Wiener Musik Verein at the age of 21. ‘Fame is a medal with two sides: you do get a better table. But I’ve also had people harassing me on the phone.’

The Americans have many unifying symbols, like a president, a national anthem. The Eurovision Song Contest, could that be a European symbol?

‘We have president Merkel,’ Lidija says laughing. ‘But Americans are always jealous, hungry for our old traditions, no matter how many symbols they have. Europe is a small continent, packed and rich in culture, but we have learned to get by and live together. Maybe we don’t need symbols.’

What is the position of Croatia in Europe?

‘Right in the middle of Europe, and therefore we have a long history of neighbours influencing us, from Austria, Serbia, Italy. And for a long time we were not independent, but part of the Austro-Hungarian Empire. What we bring to the mix is warmth, our Slavic soul. You see, the more you move to the west, the more people tend to be closed up,’ Clara’s assistant answers. I’m not always sure if she is expressing her own words or Lydija’s.

It takes a few drinks

‘But here we don’t need drinks.’

But you drink anyway

‘Some do, some don’t. And this warmth can be misinterpreted. In Croatia, if a person is lucky enough to have a job, he or she enjoys it. He doesn’t need to be well paid, but he’ll work hard. And also many Croatian artists working abroad are known as hard workers. But when they sit down to have a cup of coffee, it may look like they are relaxing, being warm, and not working, but that’s not true: work is still on their mind. Their balance is better.’

At the same time Croatian talent is moving away from the country, isn’t it? Is it reversible?

‘That’s true. They are, not because they couldn’t get a good education here, but because of the economic situation, it’s hard to find a job and find yourself worthy. We act the way many small countries do: there’s a bit of provincial spirit reflected in the fact that instead of supporting our own artists, we like to invite the big names. But a big name doesn’t guarantee a better quality than a local artist.’

Are you treated respectfully abroad?

‘Madam’s experience abroad,’ Clara’s assistant says, ‘is that she has been pampered.’ ‘I’ve been literally carried upon hands by a German audience, so then they weren’t closed… you have to find the secret spot to open them, just like a flower.’

The music I heard this week wasn’t classical, but the boom-boom-boom, the turbo-folk.

‘That’s played in clubs but it is not originally from Croatia. It is from Serbia. There are people who listen to it and find it relaxing, but it is not really a part of our culture… Ours is more harmonious, dating from the middle ages, and related to the Gregorian chanting. And mind you, Croatia was the third country in the world to have opera.’

What do you experience from the EU? Have you seen changes?

‘Yes, no more waiting in line when you travel. And there have been funds available for Croatia, but unfortunately we haven’t used all of them properly. Because some people were not educated enough.

‘No, everywhere. Also ordinary entrepreneurs. Somehow some people expected the funds to be handed to them on a plate, instead of activating it.’

‘Madam feels she is a citizen of Varadzin, her home town. Then Croatian and after that, a European,’ Clara’s assistant answers. ‘Varazdin is the most beautiful town in the country, did you know?’ Lydija says in German, leaving the translators temporarily out of a job.

I spoke with a Nigerian immigrant this morning. He told me that African people feel they have a lot in common. How does that work for us?

‘Madam thinks that we may have something in common, but it’s very hard to define: diversity is strong. Europeans are more individual, they first think: what is in it for me? When she came to Africa, she felt more at home than here, she felt a sense of togetherness. Something maternal, and really old, thousands and thousands of years old.’

‘I’m lucky because I come from a part of the country that was not in the war zone. But I was almost shot by snipers, twice. Not raped, not the house burnt down. But I have met people who experienced these tragedies, and you do share the pain. The wounds haven’t healed yet. I was offered a chance to leave the country and go to a safe place, but I didn’t want to: Croatia is my home.’ Clara’s assistant continues: ‘and madam was also very active in raising funds through performances, to help the victims.’

Could the EU prevent new conflicts in this region?

‘Madam doesn’t claim to be clairvoyant, she doesn’t know what the future brings.’