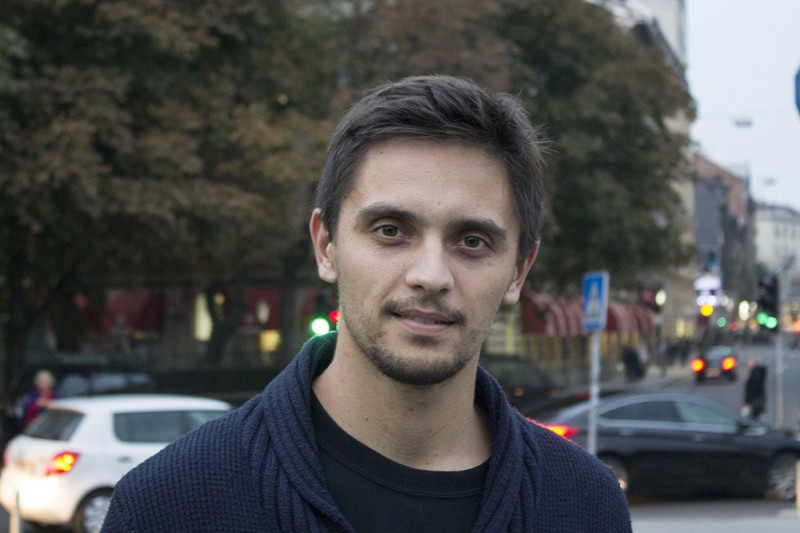 Maybe it is the Erasmus exchange programme, or because they watch the same TV shows and films, or listen to the same music, but there is a whole new army of the young and international. They speak fluent American, are very bright, tech-savy, and ambitious. Some of them are hipsters, but Ivan is not. He’s more of the good-looking nerd type: tall, in good shape (‘I do martial arts and practice shooting. Yes, with guns’), but a bit awkward. ‘I have yet to develop sarcasm.’

‘I’m setting up a bar at the moment, The Black Cat. But my main business, although we haven’t formally established a company, is bitcoin brokerage. A couple friends and I pooled our money and started dealing.’ It’s a line of business I’m not too familiar with, so Ivan tells me about MtGox, bitcoin exchange markets and bankruptcy.

‘We used to deal on an exchange that went bust, and we sold a lot of bitcoins there. However when things started to get shady, we decided to re-invest. We were a bit suspicious, because payments were always a couple of months late, so we suspected something was wrong. We backed off a bit and by the time things really went wrong, we had already recovered our capital.’

In many countries it’s illegal, isn’t it? I’m allowing myself a few stupid questions here. ‘No I don’t think they’re illegal anywhere, it’s just that there are central banks and central governments, that don’t recognize bitcoins as regular money, that’s all. But there’s always a legal risk. You can try to outsmart bureaucracy, but it’s a never-ending race, they’re always after you,’ he laughs.

Is there a way trying to influence that, maybe lobbying?

‘Well, I also do politics… actually I’m vice president of the youth branch of a political party. But I’m a classic liberal, a libertarian, which also means that I don’t want government to intervene in other people’s lives: I’m trying to encourage them to get out of their lives.

And, what did you think of Croatia becoming part of the European Union? Has that been a good thing?

‘Well, we were sceptical, because we don’t like band-aids, and the European Union does tend to put on more and more band-aids. The aspect of the EU I do like is the freedom of movement, freedom of interaction, freedom of trade, freedom of labour. However it’s been transformed into monolithic, bureaucratic institutions, in my opinion.’

Yes? How would you re-arrange it, if you could?

‘By having basic ground rules, and leaving them like that. Let nation states that have signed this multi-lateral contract that is the basis of the union arrange the details according to their own preference. Don’t try to regulate everything, including the infamous example of shape of a banana. What I would like to see is something like the American constitution: basic human rights and freedoms, but very strictly defined.’

Isn’t it necessary to have a common currency?

Ivan studied law, but feels comfortable talking about economics (‘Economics isn’t something you need to have studied,’ he says, ‘I know it sounds cocky.’)

‘No, not necessarily. Money in general is a commodity like anything else, money should compete like companies compete, some money is better than others.’

Don’t you think it is important to form a block against the other big blocks?

‘No, I disagree. We’re not competing against China, there is a thing called “congestion” in economics, when you have too many people doing the same thing.’

He gets up quickly to save his mountain bike from being stolen, and returns to say: ‘That’s my issue with the European Union: it’s a centralized power in which I have too little say. My voice, compared to – how many people are there in the European Union– a couple of hundred million? Again,: I prefer way more personal freedom and less government intervention, and fewer mandates.’

And there’s the war… Although Ivan was born in 1989, he has vivid memories of this period.

‘When the war came too close, my father brought us, my mother and sisters, to Slovenia, left us there and went back to fight. And from the weeks before that I remember bags of sand in windows, because there were snipers in Zagreb, shooting civilians. I remember one particular attack on the office of Mr Tudjman, our president. And I remember my dad coming back, with a full-grown beard; I didn’t recognise him.’

Do you have Serbian friends?

Do you talk about the war?

‘We joke about it, to try and take the edge off it, because it’s very unpleasant otherwise. You know, we were fighting a defensive war, we were not invading, we were just defending our homes. I don’t want to hold a grudge. But I think that the people responsible should be found and punished. I don’t believe in unconditional forgiveness. Justice has to be done.’

Do you think Serbia will also become an EU member-state?

‘Very likely, the EU wants to grow. And I think our constitution still says that we will never join a union with Serbia. But there’s trade between them and us, there are Serbian tourists visiting our coastline. And quite a lot of Croatian youth who go to Belgrade to party. So there’s interaction. The biggest obstacles are the politicians.’

You’ve travelled quite a bit, through Europe and the world. What do you think of as typically European?

‘We have a cultural tradition, you can literally follow the records of our development. Of civilisation. Egypt is very close to Europe, you can see that influence. Europeans are more relaxed, I think. More than Americans, for example. They are more enterprise-oriented.

Is Croatia enterprise-oriented? Is it okay to be an entrepreneur here?

‘Not at all. It’s the result of very slow government. The entrepreneurial atmosphere is terrible as it is in many former communist countries. Take the café: I’m only trying to open a place where I can serve a drink to someone sitting outside. I’ve been waiting for a permit for 2 months now. And also, the status is low. People tend to be suspicious: where did your money come from, you stole it, admit it!

Maybe because of those cowboy entrepreneurs who took advantage of the post-war situation?

Yesterday I spoke to a doctor, who is 70 years old, and she said that when she is abroad she feels she has to defend herself for being a Croat. She feels second class. But you’re from another generation, do you feel the same?

‘No. However, you know how the Greeks feel about Germans and vice versa. Croatia is small and poor and we have a long way to go to become western. We are still stuck in our eastern block mentality. So they may be right about people looking at us with some contempt.’