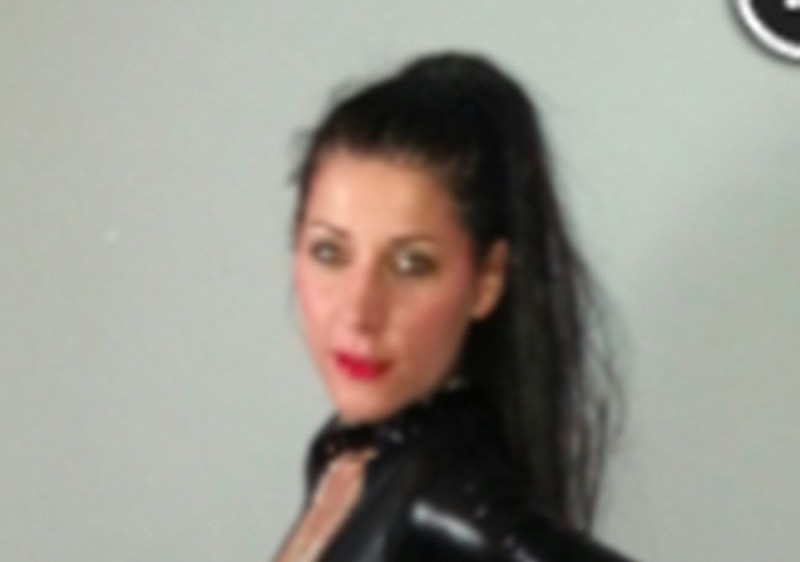 The elevator stops on the third floor, I see a door slightly open, and looking around to make sure no one sees me, carefully push the door open a bit further, and step inside. Suddenly, there she is: a tall woman, at least 1.80m, dressed in a black latex cat suit and a hood that covers her whole face – all I can see are her clear green eyes. ‘So, are you sure you only want to talk? Or you would like some domination?’ Elizabeth asks. I opt for the former.

She starts with a tour. ‘This is my dungeon,’ she says. The big black cross on the wall is for disobedient slaves who deserve to be tied to it. And there’s a huge bed, of course, and a lot of outfits: nurse, police, and latex. ‘I have to invest a lot of money in my clothes, because my clients expect it. I buy and buy and buy, so when my clients come, they can choose what they want me to wear. I don’t want my clients to think that I have only one pair of shoes or always wear the same outfit.’

‘I only do domination. No sex.’ Elizabeth’s rules are clear. Domination and sex are two different things. ‘Making love with a person is for a person you love. It’s intimate. It’s not for sensation, which is what domination is.’

‘Five years ago, my friend put my profile on a site for sexual encounters. A guy messaged me asking if I wanted to hit him with a stick on his ass and his back. No sex, he just wanted to be punished. He would give me 150 euros to do it. This was a lot of money five years ago, so I thought, ‘Okay… Let’s do this.’ When we met I was a bit scared, because he was a big, d tall guy. But he just laid down on the bed, and said that I needed to punish him. So I did, and he told me that I was very good. I remember sitting there and thinking, ‘Well okay, so if I’m good… I can earn good money with this job.’ I did it a few more times, and eventually made my business out of it.’

Do you have colleagues here in Zagreb, other dominatrixes?

And since the book, 50 Shades of Grey, has domination become more popular?

Is it good for your business?

Prostitution is illegal in Croatia. What do you think of that?

‘Yes, I think that if it were legal, they would take money from prostitution.’

‘The politicians. Now they don’t get anything. Because officially it doesn’t exist,

And you’re not afraid of the police?

‘I work for myself, so I don’t have to worry. They’re looking for organisations, drugs. They search for the big guys, the real criminals.’ ‘But,’ she tells me, ’70% of the organised prostitution is run by cops.’

The cops are behind it?
‘Yes.’
So they are corrupt?

‘Here in Croatia it’s normal. One policeman who’s in the business, used to tell another guy when the cops were coming, so he was warned. But in return he asked for money. When the guy stopped giving him money, he got caught.’

Elizabeth also works two jobs herself. In addition to being the boss in her domination room, she is the boss in the kitchen as well. She works as a chef in a restaurant. She is very open about her domination business. ‘My friends know that I do this.’ For her, it’s nothing to be ashamed of. ‘I told my friends, so that if they call me to go out for a coffee or to the discotheque, I can tell them that I can’t come because I’m working. I don’t care if they judge me, because people judge you anyway.’

The paycheck of a chef is small; she tells me, ‘and even smaller now that Croatia has joined the European Union.’ Elizabeth is not a fan of the Union nor of Croatian politicians. ‘We have bad politicians. Before the current prime minister, there was Ivo Sanader. Have you heard of him? He was corrupt and stole everything from Croatia. His daughter lives in an apartment in Manhattan, New York, that rents for 10,000 dollars a month, so…’

Can you remember how it was before 1991? Before Croatia became independent?

‘I was three years old and I remember that it was okay. When we became independent, everything went downhill.’

And what was it like in July 2013, when Croatia joined the Union?

‘I don’t know. I am not interested, because it will not change anything. My life doesn’t change, everything is the same. I alone can change my life, and nothing else.’

But now that Croatia has joined the European Union, you can work everywhere in Europe. The Netherlands, Germany.

‘Yes, but I think if I want to work in Germany, I would have to know German.’

Have you seen a lot of European countries?