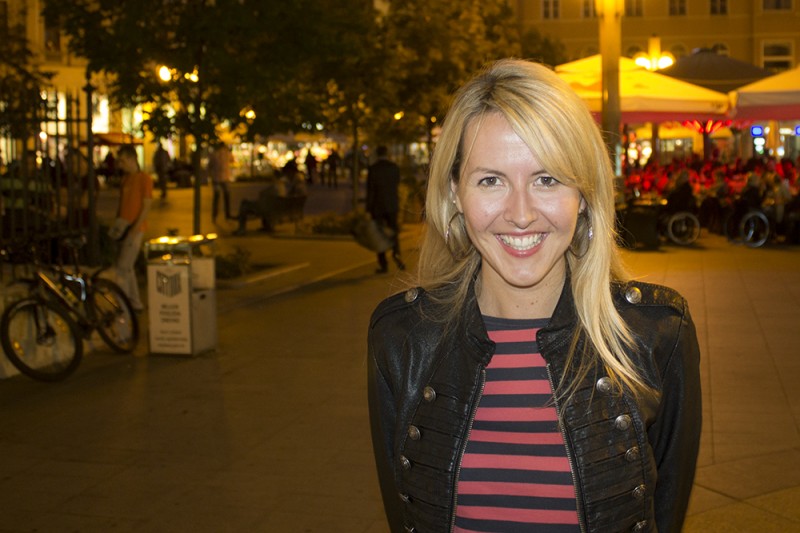 ‘Who hangs out in apartments?’ Ana laughs disdainfully, taking a seat at one of the few vacant tables on the terrace. ‘When I was living in Brussels I was constantly depressed about always sitting inside. Here, you don’t meet up at someone’s house, you go outside.’

We’re in the so-called ‘Manhattan’ of Zagreb where life happens in the streets. People swap their inside desk for one of the city’s many sidewalk café offices, where the lines between work and social activities are blurred. Zagrebians only stay indoors during the cold months of December and January.

Ana brought along her friend Vedrana, a city councilor for the liberal and pro-European ALDE party. Every few minutes, Ana looks to Vedrana, to help her find the right word in English. This insecurity seems a bit odd for a border police officer used to making split second decisions about whether or not she lets people enter Croatia.

‘Since we became part of the EU, even more people are interested in coming here’, Ana explains. ‘So now we have a lot of immigrants and we have a short period of time in which to determine whether or not they’re allowed to enter Croatia. Are they coming as tourists or do they have other interests? It’s very difficult. I can just send someone back on a plane, back to their own country. But if I make a judgment error, it’s my fault.’

Ana pauses and takes a small sip of her tea. It’s the only tea she’ll have during the interview as living outside is an expensive habit.

‘I really believe in astrology, and I sometimes use it while working at the border. The other day I met this Turkish guy who had every reason to be let into Croatia, but something seemed suspicious to me. I looked at his passport and he turned out to be a Libra.’ Ana looks at me as if she’s is stating the obvious. ‘That’s a problem. They can talk, they can manipulate. They’re charmers. Fire signs like Aries, Leo and Sagittarius are more transparent, but they tend to have criminal records. Of course, I could never talk about that on a professional level, but still, it sometimes helps me make better judgments.’

Ana is what some would consider a typical Eastern European, thirty-something woman: well-dressed, pretty, slim with blonde hair – colored, of course – and a kind of mischievous look in her eyes. ‘She’s a revolutionary,’ Vedrana smiles.

Ana shakes her shoulders. ‘In everything. My boss always says that I’m not afraid of authority. He hates that, everyone hates that. Because in the police, just like in the army, when he says “Do this or that”, you must obey.’ ‘Don’t ask questions, just do it.’ ‘Exactly. And I can’t stand that, so I cope with it in my own ways.’

When you’re in other countries, do you look at the local police, how they operate?

‘Now that we’re in the EU, they send us to other countries on exchange programmes so that we can learn. They’re usually better than we are; they have better operational systems and technology. We’re a poor country, we have poor people. And in those circumstances, we are seriously underpaid. The waiter in this bar has a better salary.’

‘Yes, really. I only stay at my job because I love it. I used to study landscape architecture, thinking that someday I would make a lot of money. But then I realized I didn’t want to be rich and draw gardens all day. It’s better to do something I’m interested in even if it means having less money.’

Do you think that maybe that will change now Croatia is in the EU?

‘I don’t think so. It’s an internal problem in this country; we all have bad salaries.’

‘I heard that many people were not too happy about Croatia joining the EU last year.’

Vedrana shakes her head disapprovingly. ‘Croats don’t believe in the EU, because of the way it was represented to us.’

‘You thought it would be better?’

‘Well… Nothing really changed. We are afraid of everything, afraid that the situation will become worse than it already is. It hasn’t gotten worse, but it hasn’t gotten better, either. It seems as if it’s become a second nature to Croats to be skeptical. Skeptical about life, about the EU. Skeptical about outsiders, too. My parents have taught me to be open minded towards other nationalities,’ Ana reminisces. ‘They taught me to think differently than they do. When my parents meet someone, they first ask for their last name. That’s how they know where the other person is from. It is a way of prejudging people based on their nationality. My generation is not obsessed with that anymore.’

‘It was before. Back then, people were obsessed with the war. But now there’s not even a single reaction when the Serbian officials are visiting Croatia. We have moved on. If you ask about it, people will tell you about the war; how it was, who died, where they were. But they will never randomly start a conversation about the war.’

‘It’s clear that the new generation in Croatia is ready to move on and create a better Croatia. Still, Vedrana thinks the nationalism of the older generation could get in the way of real progress. ‘In a way, we’re just like Ireland. We don’t want outsiders representing us in Europe either. But I honestly don’t really care about our new EU commissioner. He is appointed only because he’s Croatian and he’s from the government party.’

‘So it’s not about sending your brightest and most competent politician?’

‘Of course not, it’s a political decision. Honestly, I don’t even care about having a Croatian in the European Commission. I would rather have a really smart and creative German than an average person from Croatia. I don’t care if he’s Croatian because it will not benefit Croatia in anyway, he’s working on development aid. That whole concept of nationalities being important in the commission is wrong. If you want the EU to move and be an important player, you have to have the most competent people in positions. And not just fulfill the criteria of nationality.’

‘What do you think, will the European politics ever change?’

‘Yeah, it will. It’s a long process, but it has already started.’ She stops and looks at Ana, who has a somewhat proud look on her face. ‘She’s optimistic’, Ana smiles.

‘I am! I mean, ALDE already had a candidate for the President of the Commission. So this is a first step. More and more European parties are forming and people start to see its importance. If we don’t kill this process, it will naturally grow into something productive.’