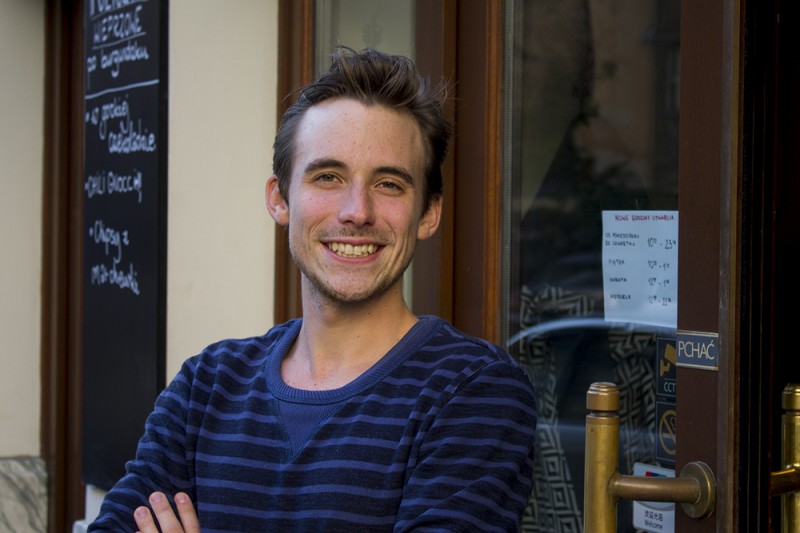 ‘Order something,’ he says.

I heard the food is very bad in here.

We are sitting at a table in Kitchen Restaurant, at lunchtime. The boss is wearing jogging pants and trainers: he has been running. ‘I’m training for another marathon, I’ve just finished quite a strenuous training session.’ This young man sure seems to be in good shape. And he has to be, I guess, in order to run a restaurant, open two new ones and prepare to star in a TV-cooking show. ‘It’s around the clock, 7 days a week.’

Tomek studied business in England, and started to work in restaurants at 16, first as a waiter, then as a cook. At 20 he began writing a column in a well-known Polish culinary magazine. One thing led to another, and the column eventually led to culinary programmes, a culinary academy, cooking on a morning TV show, and becoming more and more involved in media. ‘In two weeks I will be on a billboard, advertising a traditional sausage; I just agreed to a partnership with the company producing them.’ And the TV show: ‘Well, two actually. One about food and a healthy life style. And another one on commercial TV, in which guests compete to be the best chef. Their job is to recreate the things I cook.’

You’re the Jamie Oliver of Poland?

He laughs and doesn’t answer – he does that quite often. Instead he says: ‘Entrepreneurship is about passion. The more you try, the more setbacks you have, the more success you’ll have. And we have many things to improve. But it’s a process, difficult to find good people. I’m a perfectionist. But I try to set up a construction where I can open new businesses and still have free time as well. I need that. To travel, for example.’

I clumsily knock over my glass and water flows across the table. A waitress quickly comes and dries it, but Tomek doesn’t blink an eye. He simply continues talking.

‘I travel a lot, but all dedicated to cooking. I’m trying to find out how people live, from the food perspective. I believe that knowing how a country eats is to know them well. We use it in the menu, but also in the design of the place.’

‘You can learn a lot from the food. If they use a lot of oil, it is to protect against bacteria, and if they eat meat, which meat do they prefer? You learn from the country’s history, looking at food. And I like to reproduce the things I eat in other countries. You are having fried sweet potatoes. I had them for the first time at a Santa Monica farmer’s market, in April I think. I tried to copy them when I got back; I thought it would be easy. But the ones I had were crispy, and mine weren’t. What was the trick? I discussed it with my chef, but we couldn’t figure it out. Finally, after reading and reading, I got it: it lacked starch, and we needed to coat it first, and then fry it. Then it gets sweet, but not black.’ This is a man who is crazy about food, who can talk about it all day. And so he does, at least for half an hour, before I have the chance to ask him something, to start the interview. He tells me about steak tartar with Dijon mustard ice cream. Pumpkin ice cream. And says that the plates his place uses are the same as the ones they use in Noma, the world famous restaurant in Copenhagen. He explains his fascination with street food, how eating starts with looking, touching and smelling the food; eating is only the final step.

He suddenly jumps up from the table and rushes out to save his car, a nice BMW, from a wheel clamp. ‘Just in time,’ he says three minutes later.

What does Europe mean to you?

‘It’s funny. My favourite places in the world are Asia and London. In Asia people are smiling. And you ask yourself: why are they smiling? They aren’t rich, not famous. Why would they smile? But they’re happy because they’re eating something real, something nice. In Asia life is much easier, here we are too controlled. Europe has cheap airlines, but shitty ones. It becomes the standard. Europe is highly developed, high-tech, but we’re moving away from quality. You know, we had Concorde, which could take you from London to New York in little more than three hours. Great quality, but it stopped, in 2003.

And now we no longer have planes that fly that fast. I appreciate quality. But I don’t appreciate having to change products all the time. I don’t want a new iPhone. I would like products to be more sustainable.

If you were the CEO of the EU, what would you change? If you were Mr Tusk?

‘He has a nice daughter. She comes here from time to time; she’s a fashion blogger.’

If you were in his shoes?

‘Many celebrities come here. I know quite a few of them. I brought them here, and because they like it, they return. But we treat them the same as everybody.’

Another try: what would you do or change?

And he starts talking about Singapore, about Hong Kong. ‘It should be possible to have the same kind of street food here too. But the EU has all kinds of regulations, for example, banning the use of raw eggs because of the risk of salmonella. There is too much worry about silly things. Not that many people die of salmonella. They should not forbid certain products, but improve education about food and hygiene.’

How would you present Europe?

‘We have to figure it out. We have a long and interesting history. But we are forgetting about quality and prefer quantity. This is true of products, but also of our lives. We want to standardise everything, and that’s not good. We want to make a McDonalds out of the EU, and that is stupid, because if everything is the same, why would you want to go there? We should cherish our differences.’