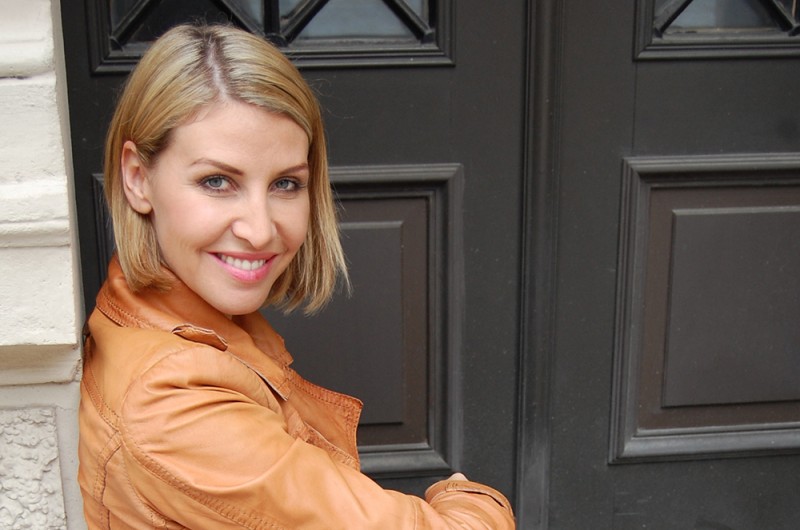 Long legs, a leopard print dress and pink lips. It’s hard to say which is more impressive: Cathy’s appearance, or the shimmering lobby of the very classy five star Imperial Hotel where we meet for a cup of coffee. Cathy Zimmermann, TV personality. She is a news anchor, a model, and a famous Austrian. The second Austrian to ever pose for Playboy. An Austrian who stands out in her more ‘conservative’ country.

After studying economics and languages (‘I didn’t see myself doing that for the rest of my life’), Cathy went on to become a weather presenter and eventually a news anchor for Österreichischer Rundfunk, the national broadcaster. A job she quit two years ago. ‘I just didn’t want to do it anymore. Everybody said that I was totally crazy to give that up. “You could have had that job until your retirement!” they said. When I heard that I asked myself if I wanted to know at 30 what I would be doing for the rest of my life? The answer was simple: no! I need new things. Challenges. I need that. I want that.’

A media scandal about Cathy breaking up with her also-famous boyfriend and posing for Playboy came up early in the conversation. The moral judgement, the scandal, she hadn’t expected it. ‘They wrote about it for two months, it was a long period and really annoying.’

Have you thought of leaving Austria? I ask – and moving to The Netherlands, I think: we have always room for nice, intelligent Playboy models.

‘I don’t know if it’s better somewhere else, because I have never lived anywhere else. But of course it crossed my mind.’ She uses England, and Kate Moss in particular, as an example. ‘I’m not comparing myself with her, but if Kate Moss gets caught on the toilet taking whatever she takes, cocaine, and there is a photo of it in the newspaper, the next day she still does an ad campaign for Gucci. If you would do that here, if I had a picture taken with cocaine or a joint, I think I really, really would have problems getting a job. I understand that you can’t have a news anchor on TV who has a photo like that in the newspaper. But just to give you an impression of what I mean: I think Austria’s society is really conservative.’

But in May, Europe got to see an entirely different kind of Austrian face. A female face with a beard. Conchita Wurst, extravagant protagonist of LGBT rights, won the Eurovision Song Contest. ‘Actually, it was a surprise for a lot of people here. And there are a lot of people who dislike it. A lot people say: “That was the worst day in Austria’s history”. There was a shit storm, but not an official one.’

She stretches one long leg, and takes a sip of her green tea. ‘I don’t know what it is in Austria. Maybe it’s because we have no sea or sun, no long hot summers or Latin music, but we can’t really enjoy life enough. We don’t allow ourselves to enjoy life or show that we are doing so. If you wear pink trousers and a yellow cap, people in the streets look at you as if you are an alien.’ But I’m not sure whether this is true: on my way to the Imperial Hotel to meet Cathy, on a calm, ordinary Tuesday morning, one of the first people I ran into was a man, about 40 years old. Above the waist he wore a jacket and a tie, below he was wearing pink stockings, suspenders and high heels. Even in ‘wild Amsterdam’, my domicile, this man would make heads turn.

Being famous in Austria is really easy, Cathy says. ‘We don’t have all the hype they have in the USA, where there are thousands of paparazzi. You don’t have that here. You simply don’t have photographers standing in front of a club waiting for someone to come out drunk. It simply doesn’t exist here.’

Are there advantages of being known?

‘You get invited to events, to lots of them. And in time, you know a wider circle of people. You get to know a lot about them and the interesting things they do, so of course that is a big advantage.’

Now Europe. Do you feel European?

‘Yes, I do. Starting with the simple fact that I was born in Europe. And though I was born here, my father has Hungarian relatives, and on my mother’s side there are Italian ties.’

You are the United Nations of Europe embodied!

She laughs. ‘Yes! And I have friends from Spain and Serbia, so it’s really mixed. And such a mix is also something very European, don’t you think?’

And off she goes, to Louis Vuitton at Kärnter Strasse for her new project: online style and shopping. A day in the life of Cathy Zimmermann…