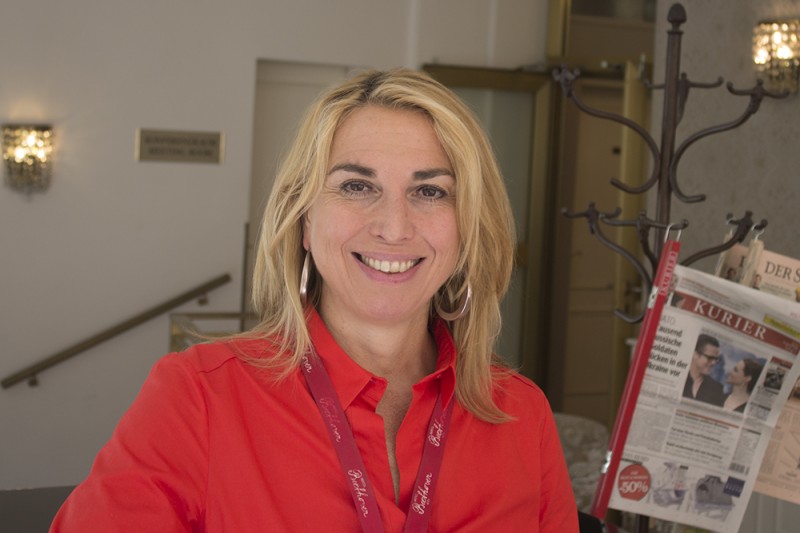 Hotel Beethoven is located on the corner of a small, quiet street in the cultural heart of Vienna,. Inside, music plays all day long –classical of course-, guests are greeted by charming receptionists, and the rooms are spacious and modern. A great place, you should stay there! I did, for three nights, and that’s how I met the owner, the bright, charming Barbara. ‘I love to see all these different nationalities sitting together in peace, and happily talking to each other,’ she tells me as she surveys the breakfast room. ‘We have guests from everywhere. People from Kazachstan, Israeli and Arab people. People who never meet in everyday life sit here just forty centimetres from each other and you don’t feel any tension.’

After studying at the Hotelfachschule, a college for tourism, Barbara started working in hotels. From reception and catering to sales and management: she’s done it all. When her daughter was born, she stopped working in the tourism industry, vowing that she would never go back again. ‘Well,’ she laughs, ‘never say never!’ Because, after selling her photo copyright company, she started thinking about owning her own hotel. And in 2009, she took over Hotel Beethoven.

Are there many female entrepreneurs in Austria?
‘More and more. Especially in the small business and tourist industry. And yes, people are still complaining that there are not enough women, but I think almost 30 to 40% of the entrepreneurs is female. They are organised, but I am not very good with female entrepreneur groups. I have to admit I’m against the discrimination of men. I really love men, and I don’t have problems with men. I always got what I wanted by doing things my own way, and they’ve always respected me for what I was.’ Barbara was voted business woman of the year by the Chamber of Commerce. ‘But I am not very good with the Chamber either. I think I’m really an individualist. I have a lot of friends, but all different kinds of friends. And usually when you’re in a network, it’s very uniform. I think this narrows my options.’

And in general. What is it like to be an entrepreneur in Austria?

‘It is okay, but we could do better. It’s very difficult to get a bank loan. Having a good business plan is not enough. They want your apartment or something, a personal guarantee, to get a loan. Austria is a country of small and medium-sized companies; I think they make up 70% of the industry. And the government could be more supportive. The cost of employing somebody is too high. There is too much money going to all the social insurance, but the employees get a low salary. The government has to lower the taxes, because it’s important for the economy too. Employees with a low income can’t go shopping.’

Another problem she addresses is the immigrant quota for employers. ‘Everybody knows we couldn’t do without immigrants!’ she tells me. An unusual statement these days. She explains: ‘Especially in tourism, no hotel would work without immigrants. Because no Austrian person ever applies to clean rooms or work in the kitchen as a assistant. But there is a limit on the number of immigrants that you can employ in your company.’ I can hear the frustration in her voice. ‘I don’t know why Austria is scared… It’s the FPÖ. The FPÖ says that immigrants come and take our work. Which is stupid, because no Austrian applies for this kind of work. We should be happy to have them, because they’re willing to do it. Because they spend the money and they want to be accepted and they want to work. They want to be part of the society.’

About Europe. Do European rules influence your hotel?

‘Yes, the strict fire regulations. They have cost me 250,000 euro this year. On the one hand, it’s okay, on the other hand it’s difficult for small entrepreneurs to invest all their money.’ I wonder what she thinks about the EU now that she has had to invest such a substantial amount. ‘I am 100% pro-EU. We don’t know where we would have been without it I think. It’s good for economy, it’s good for safety.’

Good for economy too?

‘Yes. At the end of the day, Austria is a very healthy country. It is much easier for us to trade because of the EU. But… it could be much better. I just heard there’s a new regulation, that you are not allowed to use vacuum cleaners with more than 6000 volts.’

The example people always come up with. People in Brussels are micro managing too much?

She ponders. ‘To tell you the truth, I know that it could be better, but I don’t know how. I couldn’t organise it.’

So if you were the CEO of Europe. And you could govern Europe as a company, what would you do?
’I think the communication is the problem. People don’t really notice what is being done in Brussels. And I think they discuss bullshit sometimes for hours and hours. Only to make a point. To prove they are socialist, for example. But this is what I think about politics in general. They should be more practical, they should help the people. Nobody feels the politicians are trying their best for us. Which should be their work. This is self-marketing. And in addition to that, democracy is definitely the best way, the best way of living together, but not a perfect way I think. We should…’