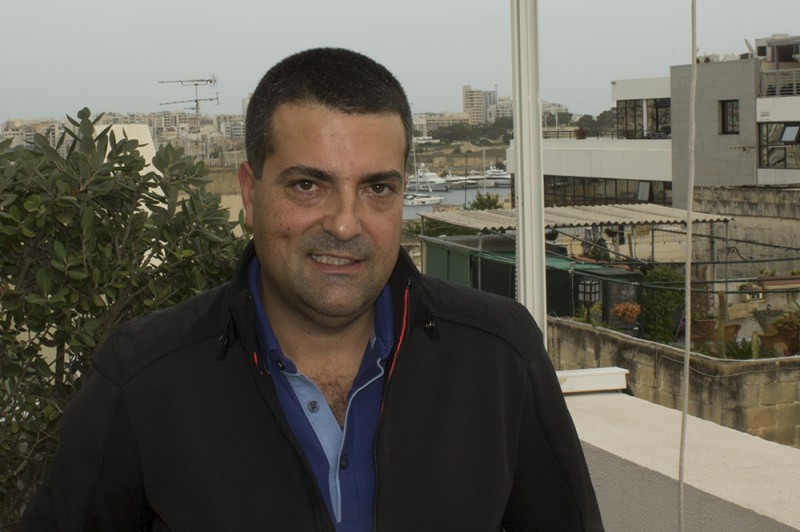 ‘We’re quite a racist country, believe it or not. We say we’re not, but we definitely are.’ Chris sits down in the company’s his meetingroom, a typical cubical-shaped room with greyish walls. For an office in a large communication firm, this room doesn’t communicate much inspiration.

Maybe it’s because Malta is not used to having Africans here. Or Asians, for that matter.

‘Yes, a lot is changing. I see it happening at my children’s school, it’s getting much more multi-cultured. Personally, I love it but most people don’t. People will always tell you they’re not racist, until you ask them if an immigrant can come and paint their houses: “Ehhh… No.”’ Chris pulls a disapproving face. ‘I’m not like that, I like this diversity.’

Do you have black people working here at your company?

Chris smiles apologetically. ‘Actually, no. Not because of colour though, I do have a partner at another company, he’s from Fiji. To me it’s no problem, we’re all humans. I have to say, the Spanish immigrants working in Malta really want to prove themselves. They work hard, give it all they have. Unfortunately, most Maltese are a big lazy. They like to stay in their comfort zone.’

The office of JP Advertising is situated in Valletta, close to the marina in the old city. Chris leads the Malta division of an international company that specializes in marketing strategies. ‘We have some big international clients like Nestlé, but most of the clients are Maltese’, Chris explains. ‘I studied psychology and communications before I joined JP. I have always studied people; what they want, how they react. To me, marketing and communication is a challenge. I’m in the business of understanding other people’s business inside out, making it my own business and making sure that the money is spent well.’

‘It’s easy, it’s pretty straight forward. We don’t have a one day turnaround here; we have two or three weeks to process orders. Also, it’s quite easy to start a business and the tax regime is good.’

Coming here, I expected Malta to be a very Southern European country when it comes to business – I expected it to be more like Italy. But it’s quite strict, quite European actually.

‘A little bit. Contacts are very important in Maltese business, unfortunately. You can do business the normal way, but if you want expertise or a way into a company, contacts are very important. That’s one of the hardest things I struggle to accept in Maltese business. I believe people should be judged on professionalism, not on friendship. If you want friends, go for friendship. Don’t ask me to pitch my ideas; don’t ask me to waste time. But I have to say, it has improved, people became more professional.’

No Sicilian situations? ‘No, I would never do that. Three years ago I opened a company in Libya. There, nepotism is a necessity. Malta is nothing like that, fortunately.’

And how do Maltese view businessmen? In Luxembourg, for example, working for a bank or a government has more status. You’re not supposed to start a business, that’s regarded as foolish.

‘Actually, entrepreneurs are quite respected in Malta when they make it.’

And when they don’t?

‘If your company folds, it’s considered a big failure. I’m personally not the person who’s afraid of closing a company; afraid of trying. In Malta though, people will do anything to keep their company alive.’

‘It’s an island mentality. We’re such a small country, everyone knows each other. You can’t hide your wealth, or anything for that matter. It makes us Maltese very jealous.

Many of the Mediterranean European countries have had financial problems, the banks were about to fail. Not Malta; why is that?

‘I think it comes from the culture of saving in Malta. We had a lot of savings, and together with proper financial jurisdiction we managed stability.’

‘I can’t compare our government with that of Spain, since I don’t know how it’s run there. There’s always room for improvement, but our government is doing well. And again, because we’re a small country it’s impossible to run away from mismanagement. It’s nipped in the bud quite fast.’

Chris takes a sip of his coffee. His heavy eyebrows frown, giving him a bit of a rigid look. His buttoned down shirt has rolled up sleeves, revealing his expensive black watch. Chris looks like the business life has treated him well. Not in the last place because of Europe, he admits.

‘From a business perspective, I think the EU has had a great influence. We became closer and I love the fact that businesses can tap into a bigger human resources pool.’

You do? Are there many people from outside Malta working in the country?

‘Definitely, both for internships and long term jobs. Also, Europe has invested a lot in our infrastructure, which has made Malta much nicer.’

Until now, Malta has been a receiving country. I guess that’s about to change.

‘It’s true, we have to start giving. Both our financial industry and our gaming industry are strong, thanks to Europe. The ripple effect both industries leave on the country is very rich. Getting international clients by joining the EU has helped this growth. Now, all your potential clients are neighbours, you know? It’s great.’

Do you think there is such a thing as a European identity? ‘I am European, but I’m Maltese first. To me, the question ‘are you European or not?’ is not relevant. It’s not a vital thing. It’s only convenient when it comes to commuting, shipping and doing business.’

So ‘Europe’ is more of an artefact, then. It’s not something that comes naturally.

‘Not really. I feel close to Italians and Spaniards, because we’re the same in life; we joke, we like to drink, we live to party. To them, I feel much closer than to Libyans.’

But maybe that’s because Libyans are Muslims, and you’re Christian. That’s the predominate culture in Europe. Maybe that’s what bounds us, the Christian culture. ‘Maybe. However, you have good and bad people in every country. That will always be the same.’

In a lot of European countries, the EU doesn’t have a good reputation. People feel like the EU is only costing money or is taking authority from the local governments. You’re a businessman; from a communicational point of view, what would you do to improve the EU ‘brand’?

‘I think people focus too much on the financial aspect of the EU. I would go back to the basic objectives. I would focus more on the people, and I don’t mean in a sense of employment. I think it’s bilateral: Europe is inhumane and plastic. For example, remember the immigrants coming in from Africa? It brought on big problems for Malta, as we didn’t have the resources to take care of them. And the EU didn’t help Malta to keep the immigrants from dying. That’s inhumane to me. Plus, it’s actually the last thing I’d expect from the EU.’ Chris throws his hands in the air. ‘Come on! We’re humans. You don’t discuss whether you’re going to help people or not. The ‘plastic’ part of Europe is the crazy expenses that emanate from running the EU.’

You think EU is too expensive as an institute?

Definitely. I mean, I’m very proud of the Maltese language. But the EU spends so much money on translators, it’s crazy.’ So maybe English should be the official language in Brussels? ‘Right. To me, that’s bad management, you should run the EU like a business.’

So what would you change as a manager?

‘Recently, I’ve been to Berlin to visit some seminars about venture capitalism and start-ups. It occurred to me that it’s really happening there for new companies. But why just there? Shouldn’t the EU make it easier for starting entrepreneurs? You have to be a multimillionaire to tap into their funds, therefore the richer get richer. And the small entrepreneurs get some help, just to shut them up. It doesn’t make sense. I think when a country, or Europe is run by politicians, unfortunately what you get is a bunch of people doing anything to get re-elected. I would try to really create business, create wealth.’

And a vision, perhaps?

‘Right. I think people should ask themselves ‘why should I be proud of being European?’ more. To reach that, Europe needs to communicate more, even with the younger citizens. My child doesn’t know anything about Europe, so how can he become closer to it? Knowledge will make people feel less threatened, less abused. We need to be working together, that’s how we can gain much more.’