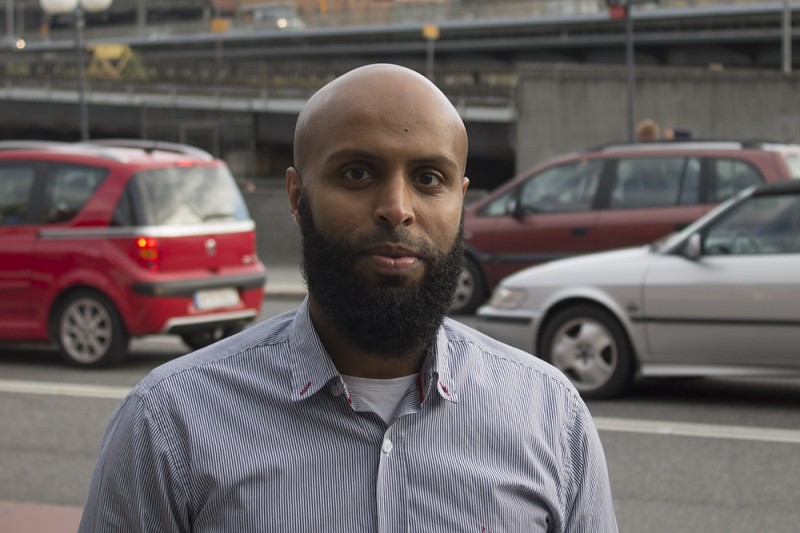 He waved at us from across the street: we were waiting for him at the wrong gate of the Gamla Stan Metro Station. Mohamed is young, bright eyed and heavily bearded. Not exactly your typical Swede, and he isn’t: he was born in Ethiopia. ‘From time to time I lecture a group of youngsters from the suburbs,’ he says. ‘And I tend to ask them: “How many of you are immigrants?”. The majority always raises their hands. Then I ask the next question: “How many of you were born in Sweden?”, and again everybody raises their hands. I explain to them that immigration is something you do and not something you are. And they’re like: “yeah, that’s true”. They do however still feel themselves immigrants. It’s a strange feeling that I can relate to. Even though I was raised in Sweden, did my military service here at the special forces, and now work as a police officer.’

Mohamed started working for the police in 2004. You might remember last year’s riots in some suburbs of Stockholm: cars burning, young men fighting with the police. ‘I was raised in one of those areas. So when the riots started I asked my boss, although we were not involved in national matters, for permission to go there, because I thought I could help. When I went out among the youth, my fellow police officers were shocked: “Mohamed, how can it be that they’re not throwing stones at you?” And I explained to them that it’s because I know them. I know who their brothers are. I went to the same schools as their sisters.’

You speak their language…

‘I speak their language. They can identify with me. Fortunately we convinced a lot of these kids to take off their masks and throw the stones into the bushes instead of at the police. The kids told me that they didn’t have any problem with the police. It’s the government that is tearing apart their whole area. They just canalize their frustration towards the police. They are the ones standing in front of them. You know, the problem is that during the nineties the government closed down all youth centres in the neighbourhood. Even schools were closing, although the classes were getting bigger and bigger. Things were going in the wrong direction. People didn’t have anything to do with their spare time. Crime rates increased. Drug dealers came in, recruiting youths. Police officers patrolled because there was a lot of criminality. The youngsters felt so abandoned and frustrated that things just exploded.’

What is it like to be dark skinned in Sweden?

‘Sometimes I hear people say: “Nigger” or “Swarting go home”. And when I was young I used to have a lot of confrontations… Until my two older brothers – who were somewhat criminal – warned me: Mohamed, we don’t want you to follow our example. Do your sports, do your school work and go home on time. They couldn’t do it themselves, but they wanted to warn me.’

Your brothers encouraged you to choose another path, a better path. But becoming a policeman was something else. How did they react on that?

‘Very proud. My whole family was so proud. For my graduation everybody could invite 2 or 3 persons maximum. But when I graduated my whole family and all my friends from the neighbourhood, about 20 people, were there. “Mohamed, you have your own crew here”, they said. And all the cars waiting outside… People were very happy. And even now, when I go out in the suburb, people always tend to ask me questions. They come to me as a source of information, as a person whom they trust. And I try to give them fair and honest answers, according to the law.’

You moved to work in another department, far away from the streets… Isn’t that a pity?

When you joined the police you were one of few people not of Swedish origin in the force, how is that now?

‘Now there are a lot more. But we’re not unified as one group. We have some things in common, but we also differ from each other. I’m not ashamed of my background. I’m a Muslim, I pray at my work, I fast, I have a beard. Not all of my immigrant colleagues are so open about their background and beliefs. Some don’t even admit that they’re Muslim. Everybody has his or her own struggle. But I think it’s a pity that immigrants working in the police force try to melt into the majority, rather than being an individual. For me it’s like this: I’m human and a Muslim first, and I make my living as a police officer.’

And practically, is it easy to do your prayers? Doesn’t it interfere?

‘I was lucky to have some very good chiefs. For instance when we were working outside and I needed a moment to pray I could just ask them. Sometimes we just went into a park, were I could stand behind a tree and do my thing for two or three minutes. Even on duty, outside, I simply kept wearing my police radio earphones. Whenever I heard my car and patrol number, I interrupted my prayers, ran to the car and drove away.’

‘Before, I used to be very much against the European Union. But the last two years this changed. When I was studying Political Science I had to learn more about the European Union and I was very impressed with the system and how well structured and organized it is. I started to feel more and more that Europe is a very good thing, and we should hold on to it. It was created to build stability in a continent that was very unstable before.’

I suppose for your work the EU is a pro, but also a con: cooperation is good, but at the same time the open borders make it harder to tackle crime. How do you see this?

‘You’re right. The criminals are always one step ahead of us. We’re always lagging behind. I hope that in time the laws will become more uniform in all countries so they will be compatible with each other. Then it will be easier to fight crime.’

A very interesting man, Mohamed. Who will hopefully someday soon will be the head -and face- of police in his hometown Y.