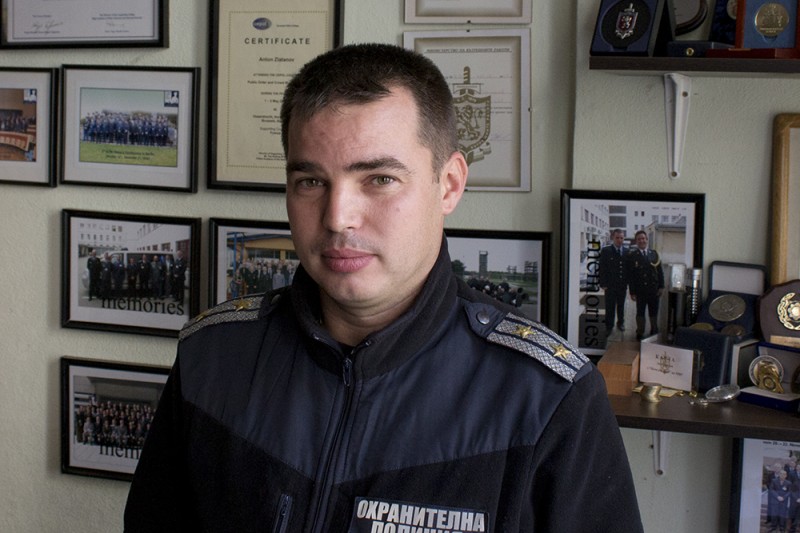 ‘Our police are keeping us secure’ is an old refrain from a famous song among Bulgarians who lived here before the fall of Communism. When I entered the main offices of the police, I realized the remnants of the old regime were still there more or less intact.

Entering the dark waiting room, I first noticed the broken chairs with their torn leather upholstery, and the broken glass in front of the reception. Lost in my own thoughts, I was interrupted by an attractive woman from the communications department, who accompanied me along the endless, gloomy corridors leading to the office of my interviewee, Anton, a 38-year-old policeman responsible for maintaining the public order at public events, including sport events. He is now the commander of the police forces.

‘I joined the police when I was 20. It was not my dream as a kid to become a policeman. But that’s what the situation was in those days.’

You didn’t know what to do so you just settled on the police?

‘It was a temporary decision; I wanted to work for a couple of years while I was studying for my BA in Economics. At first, I was a regular policeman. When I finished university they promoted me to lieutenant police officer. In 2000 they promoted me again and since then my job has been to deal with public events.’

Since then, Anton`s priority has been to develop himself and spread his knowledge. As part of his work, he regularly attends seminars and police trainings around Europe from Germany and Sweden to the Netherlands.

What is the difference between the Bulgarian police force and any other? What is typically Bulgarian?

‘You know we are the poorest country in the EU. Everything in our life is different. Wages and salaries are lower here for everybody: doctors, but also for police. When people are poor and do not make enough money they might be open to gifts from the public. It is possible when a policeman stops you on the street for you to give him something and then to drive on.’

You are talking about corruption.

‘Everywhere in Europe there is a corruption if we are talking about the traffic police. I don’t like corruption. I can understand it, however. In Holland, the police make enough money. Why would they risk their career and take the money, but the temptation here is bigger. But everyone has the right to choose. My salary is not very high, but I will never take your money.’

Anton admits that corruption is a problem, but the real difficulty is the lack of money. A good police force requires good salaries, modern equipment, training and new technologies, all of which Bulgaria lacks. In his opinion, the motivation of teachers, doctors, policeman will become stronger once the living standard improves. ‘When we the European monitors come, our European colleagues agree with this opinion. Geographically, we are very far away from Western Europe, but we are trying to follow the rules,’ adds Anton.

What is the difference between today and the period before 1989? Was the police better equipped?

‘No. At that time the government was very strong. One police officer for every 1000 people was enough to maintain order. The people were disciplined and respected the police a lot. In the Soviet time, people knew their rights, but also their responsibilities.’

After we talked about the Soviet times and the discipline, Anton tried to point out that more and more young people are joining the police force.

‘Our younger generation is slowly trying to change Bulgaria with small, but efficient steps.’

One of his steps went beyond going abroad and gaining knowledge. Anton has created a Facebook page for the police force, which now has 7000 likes, a very significant result in a country of active Facebook participants.

What do you think are the similarities and the differences between you and, say, a policeman from Belgium?

‘Everything was different 8 years ago when I first went abroad for training: my service, my mentality and the European way of thinking. Now we are already much closer.’

‘Two week ago I invited some colleagues to an international seminar; we have a lot of things to show and to share with other colleagues and countries, because in this global world right now everyone is exchanging experiences.’

In terms of European integration, the effort to challenge stereotypes is also one of Anton’s firm priorities. He believes it is unfair that Bulgarians and Romanians are mentioned only when we talk about gypsies.

‘For the people and the media, the bad news is the only news. No one mentions anything about immigrants when they take 1,000 of our best specialists, but when they see 100 gypsies from Romania who are pickpockets, they point a finger.’

‘You have the right to comment, but you have to be objective. The gypsies are only 8% of the whole population. There rest are normal people just like you and me, adds Anton.

This is why Anton tries to be fair in his work. He admits that the only distinction we need to make is between good and bad people.

What about the Roma problem? Bulgarians seem to be are saying ‘These are Bulgarians, and these are Roma, as if they are not the same nationality.’

‘We are not the same ethnic group. A lot of ethnic groups live here, and all of them are Bulgarians now.’

Anton explains there are many people among gypsies who live a normal life, sending their kids to school and obeying the law. The ones who live in ghettos are the real problem.

‘Yes, and we have problems with them. They are given the opportunity to live a normal life. If they don’ t want to live normal life, it is impossible. They live a very primitive life. That is their mentality. They are not part of historical Bulgaria, because our country is one of the oldest countries in Europe.’

‘Absolutely. Why not? I am an international guy; I have loads of friends in other countries. Only the distance to central Europe is great.’

What makes a European European?

‘Keeping our identity, but at the same time following good practices. We have not all had an equal start. When Mozart and Vivaldi were composing, we were here under the Ottoman regime. When you work, we have to run to keep up. We are a bit behind you, but after 10 years we might catch up. Some of us are trying to run. I hope there will be more of us.’