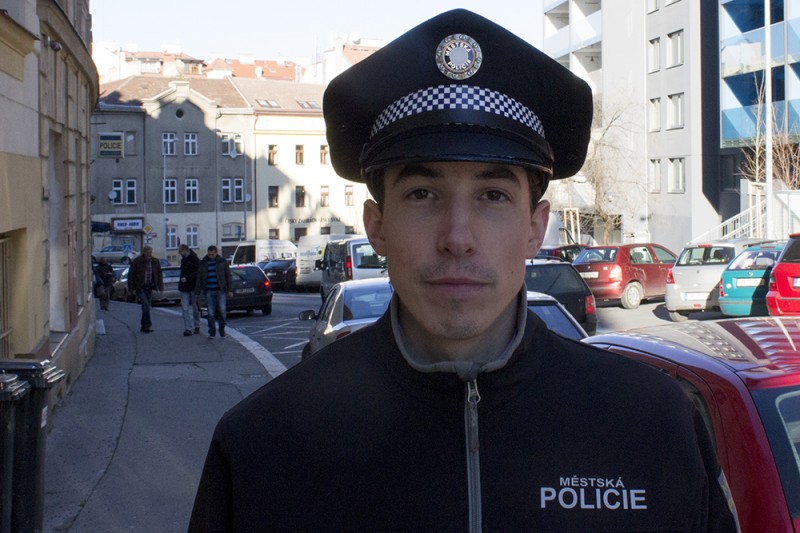 Petr seems very content with his job, beaming with pride when he tells me he caught some graffiti artists in the act last week. It’s the kind of high-spiritedness I have noticed in many young officers, happy to fulfil any task that gives meaning to the slogan to serve and to protect. ‘I don’t know, I really wanted to help people’, Petr responds as I ask him why he joined the police. ‘I feel this is the right profession for me, I can’t explain it.’

Did you watch police series as a kid?

‘Yes, I did. Columbo was my favourite.’

Really? I ask, a bit surprised by his choice. I would have thought that was something your father would watch.

‘Yes, but I liked him. And his car, a Peugeot 403. He would always say “Just one more thing” before he left’, Petr reminisces.

Petr laughs modestly. ‘No, I’m not a detective, I just patrol the streets.’

At 28, Petr is still on the threshold of his police career. Freshly out of police academy, he now patrols the streets of Prague, fining speed demons and shutting down illegal casinos in houses. ‘We have a lot of pickpockets in Prague. It’s very dangerous, especially for tourists’ Petr explains, looking every bit the diligent student.

We meet at the police station, in the Third District of Prague. It’s a quiet neighbourhood, with statuesque residential buildings and small shops. The clean streets are paved with cobble-stones. It doesn’t strike me as the kind of neighbourhood that would provide Columbo with much work.

What is the image of the police here? I recall that in France, the police are not very popular. They’re not very friendly, quite macho.

Petr smiles. ‘No, we’re friendlier. I wouldn’t say the police is very popular in the Czech Republic, because sometimes we have to fine people. Hopefully one day, they will see that we are professionals like any other. But mostly, people are very polite to us. Sometimes when I fine someone, and he will accept it with a smile and even say “thank you”. It’s a bit awkward, but it’s nice.’

So people are quite law-abiding here. I noticed that nobody crosses the street on a red light here, which everybody does in Amsterdam. I’ve heard you’re easily fined for that. ‘It’s true, we’re much stricter. But it’s only for the safety of people.’

Even though he’s young, Petr has seen a lot of Europe, having travelled in almost every country in the EU. He seems to be the perfect product of the 2007 Schengen treaty, which made it possible to travel freely around (most of) Europe. ‘It’s much better now,’ Petr admits. ‘You don’t have checkpoints or waiting lines at borders. It made travelling much easier.’

For criminals as well. Have you seen a rise in criminal rates since the opening of the borders?

‘It’s difficult to say. With our central position in Europe, we’re more of a transit country. Most people from Eastern Europe travel through the Czech Republic to Germany or England.’

‘Not that many. Most Soviet immigrants go to Western Europe, because the social system is better.’

Petr sits opposite me, dressed in his uniform. On the table lies his big police hat, the emblem of the Czech municipal police carefully polished. He has a friendly face and a boyish laugh. His facial features, with his well-formed thick eyebrows and pointy ears remind me of the good cop character in a colourful cartoon.

‘Actually, I feel more Czech than European.’ You could be both. Petr smiles apologetically. ‘Yes, I guess so.’

What do think is typically European?

Petr frowns, his bushy eyebrows almost covering his eyes. ‘I really don’t know’, he laughs nervously. ‘To me, all Europeans are actually easy going.’

Did you vote in the last European elections?

‘No, I didn’t. Not because I’m not interested, but I just couldn’t find the right candidate for me. The campaigns were very offensive as well, very focussed on other parties instead of on Europe.’

So perhaps the European elections are more focussed on national competition than on European issues?

So you’re not really interested in politics, but you do like Europe. What do you think Europe should look like in the field of police work? Should there be more cooperation, or maybe less?

‘I like the idea of being united in diversity,’ Petr answers, unwittingly – or perhaps intentionally –repeating the EU’s official slogan. ‘It’s important to fight together, to cooperate within the police at a higher level than before. But Europe should respect our traditions and customs.’

The younger generation of the Czech Republic seems interested in Europe, the older people not so much. Perhaps because they were locked behind the Iron Curtain, and didn’t trust Europe because they didn’t know what it was?

Petr nods. ‘My parents are a bit afraid of the EU, I think. They were against becoming a member in 2004. They don’t believe in this unity.’

Maybe because they gained independence in 1990, and then felt like they were being asked to give that up again?

Exactly. They were afraid of directives.’

From either side, Moscow or Brussels. What’s is like now?

Petr shrugs his shoulders. ‘I don’t know. We don’t talk about Europe at home.’

Walking down the quiet streets of Prague 3, I mull over my talk with the young officer, who has seen so much of Europe but has so little affinity with the EU. The problem of the low turnout at European elections in the Czech Republic – and throughout Europe, for that matter – is like that of the chicken and the egg. Is it the apathy of Europeans towards unity, or the wrong approach of European politicians? Probably both.