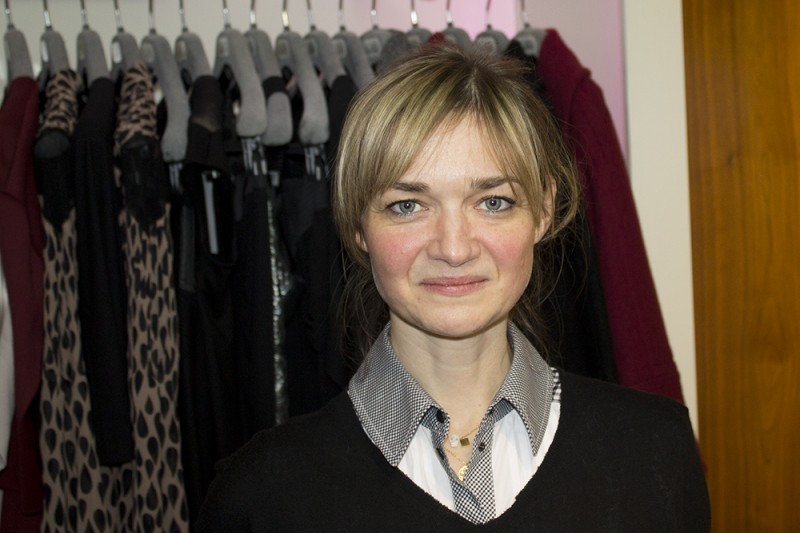 The stately buildings on Dlouhá street exude history, even though the shops they house are very contemporary. The sidewalk in front of Klara’s boutique is tiled with mosaic, untarnished by pollution. Klara’s name is written in gold letters on the façade, suggesting that a designer of her reputation doesn’t need to waste time thinking of trendy names.

Walking into the boutique is like walking into another time. The combination of coloured lights and contemporary woodwork give the shop a futuristic look. It matches the clothes, all very austere and simple. There’s a sale on , as everywhere around this time. I look at the price tag of one of the dresses: with a twenty percent discount, now only 7500 mint (around 270 euros).

What’s it like to be an entrepreneur in the Czech Republic? Is it normal to start your own business here?

‘I think quite a lot of Czechs have their own business, even if they’re not that big. Here you can find a lot of design studios, furniture and glass. It’s quite normal here. I like to be free to make my own decisions, even though you have to work a lot harder than when you’re working for somebody else. There, you go to work every day to do what you do, but you don’t have to worry whether the company survives.’

And you have to worry about salaries. Thinking about it in the evenings, in the weekends. ‘Now I’m calmer, I know that’s there’s always a way to solve things. But in the beginning I would regularly wake up in the middle of the night thinking “O my god, how will I fix this?”’ Klara laughs.

Does the government help entrepreneurs?

Klara shakes her head, stray blonde hairs brushing her face. ‘No, it’s very dark. They don’t do anything special to help you. In France for instance, fashion is big business, therefore the government helps a lot. Here that’s not the case. And also, the Czech market is very small. In big fashion countries like Germany and France you can open a bunch of shops in different places. Here, all the customers from Brno and even Bratislava come to Prague to shop.’

Klara is currently working on her new line – I’m guessing for the exact opposite season as the one we’re in now – getting help from almost ten people in designing and making all the pieces. ‘I’m more an artist than a business person,’ Klara admits while she smoothes the sleeve of a black suit jacket. ‘I studied at the secondary school for fashion and design here in Prague, before leaving for Paris with my ex-husband. There I did a little bit of modelling and worked at a company while working on patterns and choosing fabrics.’

After the fall of the Iron Curtain in ’89 – steadily referred to as ‘the Big Change’ by Klara – she went back to Prague in 1998. ‘Everything was new then; people started caring more, there were new possibilities. This was also the time when fashion and advertisement began rising. So after years of travelling between Paris and Prague I decided to come back home.’

Twenty-five years ago, the Czech Republic was still a communist country. It was an environment that didn’t really promote entrepreneurship I suppose. Has that changed over the years?

‘It has. I remember my grandfather telling about when he was young. In that time, it was actually normal to be an entrepreneur.’ Really? ‘Yes, he was an engineer and he became interested in designing new technologies. When he was twenty-five years old he invented toys for private companies. My parents on the other hand lived in a system where you couldn’t be self-supporting; you had to work for one of the big companies. As a result, people had their things on the side.’

‘Right. My mother used to work at home, making clothes to order. You had people working on the side to have their own businesses.’

So I guess you had entrepreneurs then too, only in the grey areas.

‘Yes, it was on the edge of what was official. But there’s still a group of people longing to go back to the time when they worked for a boss, got salary every month and had social security. Back then everyone was on the same level, it made life easier for some people. They tend to forget what was wrong with the system and remember only the good things. ‘

It was safe then.

‘Exactly. The younger generation doesn’t suffer from this. For them, this new situation is normal. The Czechs around the age of thirty-five/forty, however, went to school before the Change. They went to secondary school to learn a trade and then this freedom came. Sometimes, I see them being a little bit lost between the old and the new.’

In contrast to what I would expect from a fashion designer, Klara actually looks quite demure and understated. Her hair is carefully tied back in a bun, leaving her long bangs to rest on her forehead. She doesn’t wear much make-up or big accessories, just a modest watch on her slim wrist.

‘It was really weird. At the end of November of ‘89 I came back here for some paperwork, and suddenly I saw all these demonstrations on the streets. It took me years to be able to visit the Czech Republic without permission and to get my official papers back.’

How did it affect you when the Czech Republic joined the EU in 2004?

‘It’s much easier now. We produce our products here, but I regularly go to Paris for fabric exhibitions. We buy fabrics from France, Italy, Great Britain. Before we had to fill in lots of papers, now it’s much easier. You can make the order and it’s coming, because it’s from the EU. That’s an advantage.’

‘Definitely. I’ve been to Shanghai and New York and I really like seeing other places but I really feel European. This is my harbour.’ Why is that? ‘Well, I realized when I came back to Prague that it’s such a beautiful city, full of history. It’s small, almost like a fairy tale. That’s something you also find in other European cities. Every city has its own specific feel to it, you feel the history. I don’t want to say Asia is empty but you don’t feel this deep-seated history.’

I frown, take a moment to think about Klara’s answer. I guess I feel the same way but at the same time, China is really old too – a lot older than what we see here.

‘Of course. I was in Shanghai for one week for the world expo. I was really looking forward to seeing the ‘old China’, but everything is new. You have one part where you see the colonial villas from the British time but it’s such a small part. Original things like porcelain were nowhere to be found in Shanghai. Perhaps that is why I feel more connected to Europe, because they don’t seem to value their history as we do.’

I ask every entrepreneur: If you were the CEO of Europe, what would you do to make it the best continent in the sense of talent or wealth?

‘I think every country has its own speciality, something that it’s good at. I believe it’s really important to bring out these traditions and promote them.’

‘Yes, or food or wine. The handcrafts, the old work. Everybody can work on a computer, do the office work. But to me, it’s important to see the value of things you make, like nice buildings or furniture.’

In that sense, Europe doesn’t have to change a lot right? It should only preserve what it already has.

‘Right, because it becomes more and more rare for people to make things. This is something we can pass on to our kids.’