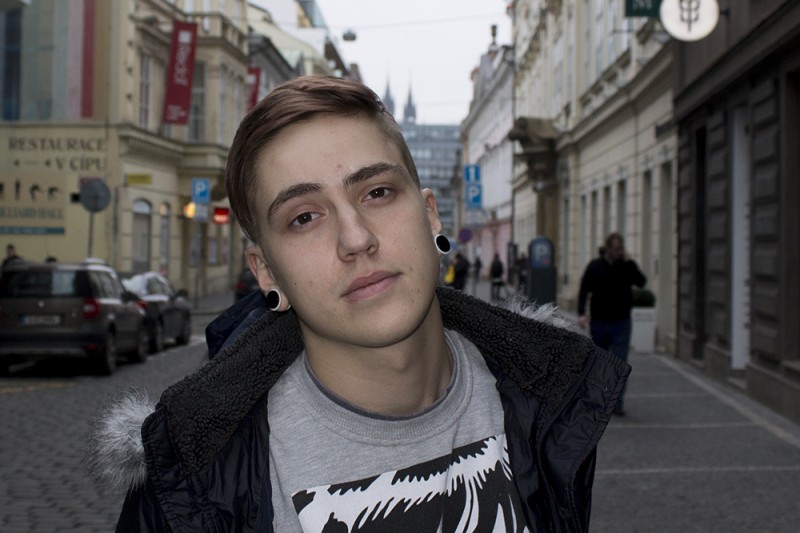 ‘It’s from watching TV. When I was about 3 years old, when the sane world had DVDs, we only had pirated versions of movies that had a thick American audio line and then a thin Russian one. I watched Die Hard or Lion King, Aladdin. I had 20 of them, and I must have watched them a thousand times each, I knew what the words meant.’

So you can quote Bruce Willis?

Egor is 24, and immigrated from Siberia 9 years ago. He works as a receptionist at the hotel where I was staying, the very hip Fusion Hotel. But most importantly he’s the lead singer of his band.

‘After this interview I’m off to Ostrava, to perform. We just had a practice.’

What’s the name of the band?

‘Right now it’s Abyss, Watching Me. It’s alternative rock, a little bit of screaming, mostly singing. Not too relaxing, but not too extreme.’

‘My mom was a TV host, and my dad was the main manager of a magazine. They wanted to immigrate and choose between the US and the Czech Republic.’ Definitely the wrong choice if you ask Egor.

How was it to land here?

‘The fact that I was a metal head, with very long hair, wearing Sepultura T-shirts didn’t help. The first year in class I just sat and listened to people talk, and that’s how I learnt Czech.’ But this did not culminate in a love of the country: he thinks the Czech Republic is bad in most respects. ‘Take service, any kind of service. Super slow. And there’s always this paperwork. They deliberately make it as slow as possible. ’

Is it different from Russia?

Absolutely. People don’t have time in Russia. I lived in Novosibirsk, the 3rd city in Russia. People have time to waste here, because nothing happens.’

‘I hate it here. Ever since I came back from Chicago, where I spent half a year. It’s almost as bad as Russia. I hate the people’s behavior, how they talk, act, how fake they are. In Chicago people wear their hearts on their sleeves. They’re called stupid, but that’s not it: they’re simple. And I have honesty tattooed on my hand – I never lie.’

‘Well. Maybe. I mean the US are founded by a bunch of rejects who just wanted a more honest world.’

Was it a problem that you were Russian?

‘Sometimes I poke my friends when they piss me off; I remind them of ’68,’ he laughs. ‘the first year I couldn’t understand what they were saying about me and after that I started talking like they do, so they couldn’t tell I’m Russian. But in general the Czechs think that everybody’s stupid. They badmouth everybody: the Germans are drunk all the time, the Italians are obnoxiously loud –and I agree – Russians are arrogant. Yet, they never look at themselves.’

What is their attitude towards people of other races?

‘Well, it may sound racist, but there aren’t that many people of other races in Prague, but most of them are dealers.’

‘Russia doesn’t care about Europe, there’s just Russia. It takes up one-third of the land of the earth.’

Are you sure? Or do you also count Kazachstan and Ukraine?

‘We do own a part of Ukraine now… And Putin is stupid enough to want to try to get Alaska back too.’

What is your identity?

‘My mom always tell me not to tie myself to any country or nationality, so I just feel like a person of the world. I hope to become an American one day… until then I still own the worst passport there is: the Russian one. Pretty much bans you from most other countries. I can’t go to the States right now for example.’

So your friends can travel anywhere and you can’t.

‘I knew from the beginning of my life that I would always carry the burden of being Russian with me. But one more year, I can become Czech. And then I can apply for an American passport.’