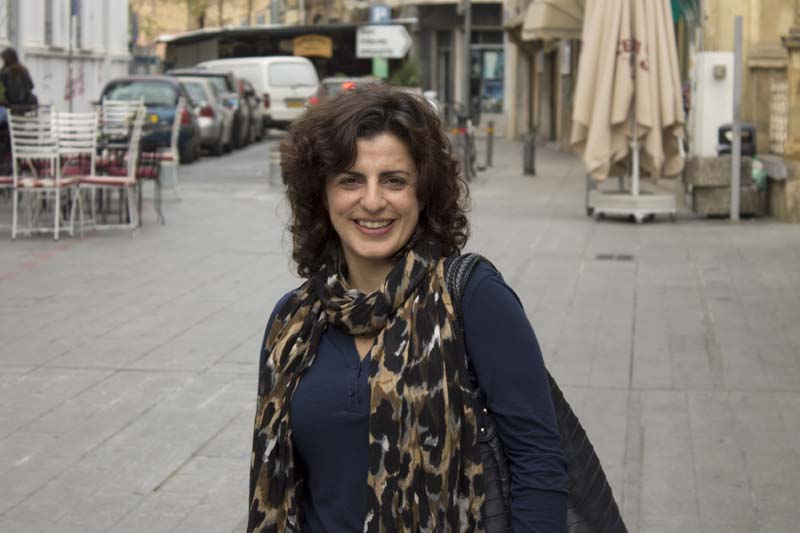 To be picked up by the police is not necessarily a good thing, you might say. ‘Be there at 11,’ she had said, but where I had expected/feared a police car and somebody stern and uniformed, Theognosia arrives in jeans and sneakers, driving an ordinary, though slightly dented, Citroen Picasso.

She’s neighbourhood-police. ‘Everybody knows me in my municipality,’ she says, as we’re heading for her favourite coffee shop in the old city centre. She can barely see over the steering wheel.

‘And they all make fun of your name?’

Every once in awhile she answers her phone. ‘Sorry,’ she says, ‘but you see, everybody in my area has my number. They call me about everything.’ Until midnight, 7 days a week. Even today, on her day off.

‘What was it about?’
‘It’s an old lady. They stole some birds from her yard,’ she says, ‘but there are deeper problems behind it. What they want is to feel they have a police officer next to them, who listens to them when they want to talk. Most of the time it’s not a serious problem. Most of the time I’m more of a psychologist.’

Theognosia’s area is Geri, near the border. Here she not only patrols every day, but also visits houses. ‘I visit them, yes, without an appointment.  We talk, and I leave them my business card. I also visit shops and companies, and go to schools, where I lecture about safety, for example about fireworks. That’s the part I like most, to be close to the youth. To make them my friends, to make them look at me not just as a police officer, but as a person, who they can like or dislike.’

‘Do they listen to you?’
‘I’m glad to say that after 4 years, after a lot of work, they do, yes. By being their friend. But there’s a line, of course. And if they cross it, I will catch them. Not because I’m a police officer, but because I care about them.’ She laughs. ‘This is not marketing, it’s what I feel. I have sometimes gone to their house and made them cry in front of their parents. But I didn’t punish them.’

‘Are you armed?’
‘I choose not to be. Sometimes I go with my belt, with the stick, spray, handcuffs.’

Meanwhile we have arrived at her favourite hangout. A waitress with a spider tattooed on her forehead serves tea, 50s jazz is playing.

‘My job is very fulfilling, I like it a lot.’ She has been with the police for 8 years; she’s 35 now. ‘I didn’t want to join the police because it was my big dream. I wanted to be a teacher, a dancer, an actress. I studied marketing, finished my studies in Birmingham. Then I worked in several marketing departments for 5 years. But I joined the police because it was a secure job, with reasonable hours. Now, because of the crisis, nothing is secure anymore…

‘How bad is this crisis?’
‘Bad. When I visit houses, you have no idea how many people are at home, jobless. But they still go out. Places like these,’ she points at the hip terraces around us, ‘are full at night. But they will drink just one coffee, they won’t spend a lot. Maybe something good will come out of this, maybe it will help people realise what’s important in life, will make them closer to one another. I’m not pessimistic. Yes, we had a lot of money, but ours weren’t quality lives. People cared about material things a lot, about the cars, the house.’

‘Has it affected your job too?’
‘Our wages have shrunk. And crime has gone up, because of the crisis in other EU-countries, like Romania and Bulgaria. I’m mean, I’m not racist, I don’t generalise, I like people from different cultures, I try to keep an open mind,’

‘But,’ I interrupt.
‘But, having said this, we don’t get the best people from these countries… And they handle things differently. In fights for example: Cypriots wouldn’t kill, Romanians might and last week a Georgian kid of 15 pulled his knife at school.

‘The end of innocence? Unfortunately it’s common in many countries… ‘
‘This may be so, but they’re finding us off guard, we weren’t prepared.’

‘This may be the dark side of Europe. Are there other disadvantages?’
She thinks for a while. ‘To be honest, it was much better before the foreigners came. And I wouldn’t have joined the EU. I would have remained independent. I don’t like everyone being the same. I would have liked Cyprus to keep its currency and culture. And the EU is jeopardising that: same currency, same rules, same culture. I’m not saying we should close the curtains and stay inside. Of course we will learn a lot from interacting with other countries, but I don’t know…. The truth is that we haven’t seen any benefit from joining the EU. Okay, we, no, the government received some money to implement some programmes. That’s all. I don’t think we would have had this crisis if we hadn’t joined the EU.’