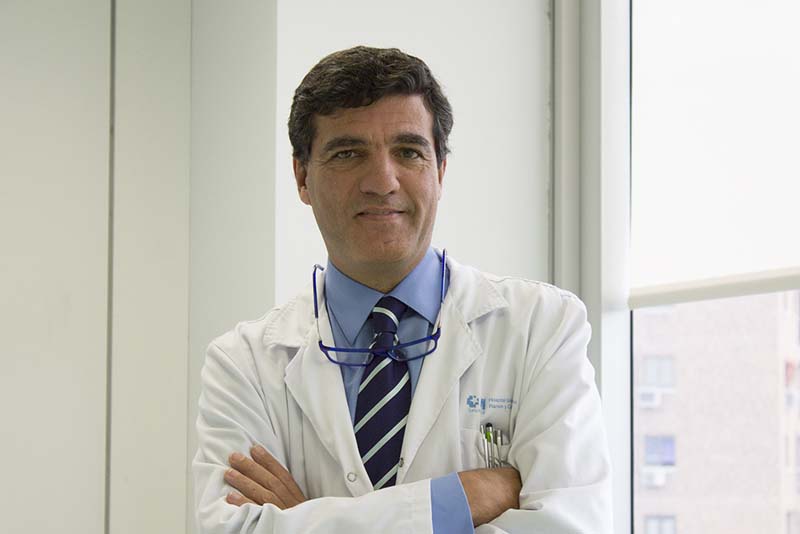 You have to be in good shape to find cardiologist Jose in the San Carlos Hospital. I walked briskly through a maze of corridors and stairs for twenty minutes, slaloming past slowly shuffling patients.

‘When I was young, I wanted to be a football player, not a doctor. I was quite good. But I’m a better doctor.’

Like many doctors’ offices his is also a small hall of fame: the room is filled with diplomas, photographs and other trophies. Halfway during the interview he walked to his bookshelf, and picked out a heavy tome: ‘This one was awarded the best textbook in medicine last year. And this one, I wrote with a Dutch professor. And this one was even translated into Chinese.’ The best trophy stands on his desk: a picture of himself with Queen Sofia. ‘It was an award.’

‘Nice.’
‘I’m not overly proud of my awards. It should not interfere with normal life. Sure, it’s nice to have a compliment now and then, but the gold medal is the smile of a patient,’ he says without irony.

The friend who put me in touch with Jose, told me that he is a bit of a celebrity doctor. His patients are the rich and famous of Madrid (the old ones of course, the ones who have heart problems). The fact that Jose looks like a doctor in a doctor’s novel completes the picture. He tells me about his work with other cardiologists throughout the world, and says he is also on the board of the European society of cardiologists.

‘Is there a difference between the way you work and your colleagues in Europe?’
‘Not really. I worked in Germany, in Mainz, Essen, Heidelberg, Freiburg. And it’s quite similar, at least in the top centres. We use the same protocols and guidelines.’

He lisps, which detracts only slightly from the picture of perfection.

‘So you could start tomorrow in Sofia or Dublin?’
‘From a medical perspective, yes, but not from the social perspective, no. The way you treat patients, for example. Europe is not one country, like the US. We may want one currency, one army, one foreign policy maybe, but not one country. I do, but I’m not typically Spanish in that regard: the Catalans don’t want to be part of Spain. The Dutch don’t want to be German.’

‘No, but that’s another country,’ I object, ‘and I assume the Catalans prefer being Europeans to being Spanish.’
‘What’s the difference? My point is that every country in Europe wants to retain its own unique culture. We need one country, but we should respect a minimum of cultural identities.’

‘What is the minimum?  There are several identities and cultures within Spain,’ I say.
‘Yes, also within the city. Every neighbourhood has its own feel.’

‘Can’t we have multiple identities? You, for example, are a doctor, but you’re also an Atletico Madrid fan, a Madrileño, and you’re Spanish.’
‘Yes, most citizens feel like that. But still we need to be more unified.’

‘How?’
‘I don’t know. I’m a doctor. The same laws should apply, in relevant fields. You need to make the people more European. We don’t feel that now. Some things are independent from cultural background, we should unify these things now. Such as the way we organise research, or how we collect taxes. We need to have more potent roots, roots that go really deep, our basis.

‘And locally you could have your own things, such as bullfights in Madrid for example?’
‘Yes, because these matters aren’t relevant: if you build a house, you start with the basement, not the roof.

‘Is the EU doing a good job?’
‘No, they’re letting in new countries too fast. The house is not solid; we can’t accept more guests too quickly. And I think that Germany is being bossy, forcing us to accept interest rates that are too high. It again proves that we are not one country. It’s clear to me there are countries with interests of their own that come before the common interests.’

His secretary – very good-looking of course –  announces that his next patient is waiting.

‘Europeans think they are the centre of the world. We open our atlases at school and that’s what we see. But it’s not true: the centre is in Asia. We need to work harder if we want to remain relevant. We should focus on innovation, that’s a no-brainer.’