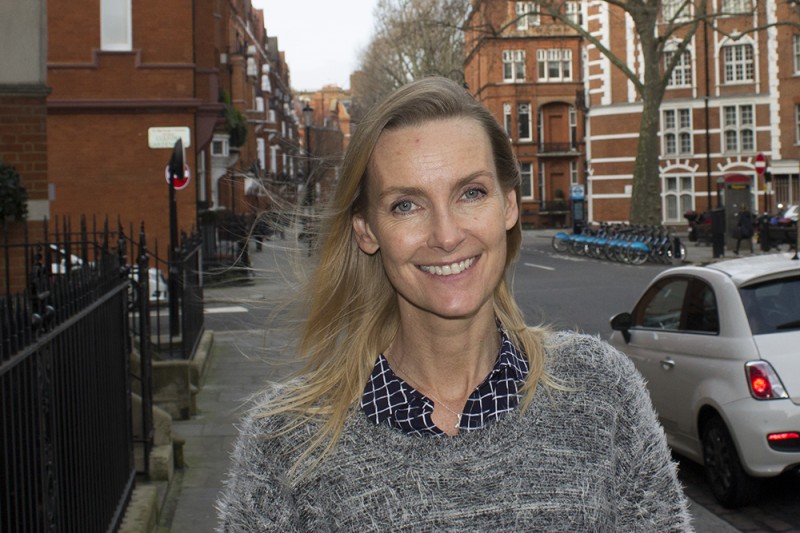 She picks me up in her Mini, which has painted bullet holes on the side, just off Sloane Square. Jeanette is a doctor, but not your everyday one: I don’t know that many who have an MBA, and used to model, or who started med school at the age of 33…

Was it a childhood dream to become a doctor, one you finally fulfilled?

‘No not at all. We didn’t have loads of doctors in the family, it’s not that I wanted to go to med school, but didn’t have the grades. It just wasn’t on my radar screen. My then husband, working for Coca Cola, was given an executive leadership programme, and because it was holistic it made sense to ask his wife, me, to also benefit from the programme. It was personal, interpersonal, life-balance, career, pfff, I took 18 different personality tests… And at the end I said, how great would it be to be a doctor! And the coaches replied that it was completely consistent with everything they’d tested. I got permission to think about it, I guess…’

She is Swedish, grew up in Japan, where she lived for 15 years before moving to the United States to go to university. She earned her MBA at INSEAD in Fontainebleau, and worked for McCann-Erickson and CNN; she has lived in Moscow, Oslo and Atlanta. Now she is 47, and has finished her medical education just last month… ‘Okay, I’ve been working as a doctor since ’07, but now I’m a fully licensed GP, a family practitioner.’

Congratulations. How did you celebrate your graduation?

‘I was happy, but exhausted. It was probably my darkest year. I had lots of exams, and for the first time in 40 years I failed one…’

Will you have your own practice?

‘Everybody expects me to, with my ‘managerial background’. I’m not sure. I prefer to be a GP in the hospital, for urgent care. I love the hospitals. The buzz and the teams, I love it.’ She thinks for a second or two. ‘Nobody I know, none of my compadres, wants to be a partner in a practice anymore. There’s no financial incentive. The weight of bureaucracy and administration is squeezing. There’s an all time low for morale… 10 minute-appointments for every patient, it’s too little time, it’s too busy. And you know, 90% of all the medical interaction is through the GP. And we have 9% of the budget.’ Here’s the manager talking. ‘But the NHS, the National Health System, is very strapped right now. It is an amazing organisation, and the longer I’m in it, the more I realise what a gem it is, and how we take it for granted and everything is free. You don’t even pay 2 pounds to see anybody for anything. Free. The Washington Post did a research comparing all the Western health care systems and UK came out as number 1. Canada and the US on the bottom. The bad side is that there are waiting times, for most things. Comparing the public and the private healthcare, the only difference is how quickly you’re being helped, and maybe the facilities look better, but we’re all trained the same…’

Is medical training at the same level around the world?

‘We have the European Working Time Directive now, which puts a big damper on training, especially surgical training. 120-hour weeks were normal for doctors. And to a surgeon the level of skill is directly proportional to the hours spent cutting. You need to have seen enough disasters. That’s why I didn’t become a surgeon, because by the time I’d be really good, I’d be 90…,’ she laughs.

With that managerial background of yours, you probably look at the process side of your profession too, maybe you see and know how to improve things?

‘I do, to a certain extent. I see a lot of inefficiencies in the NHS. By definition there are flaws in a system so big… but I don’t think it is a sinking ship. It relies a lot on the good will of the doctors and nurses, who kill themselves, long hours with very little pay… But there’s a breaking point, we can’t ask too much of them. I mean as a trainee I was netting ten pounds an hour.’

‘Teachers, same thing. Firemen, policemen. You are not recognised as a valuable part of society.

With the cost of living in London being so high it is not about having some extra money, but a matter of survival, being able to put your child in day-care. And not having to commute for 2 hours, because you can’t afford to live in Central London. I’m okay, I’m not your typical doctor.’

‘I could work anywhere in Europe. The language wouldn’t be a problem: I speak a bunch of them…

I feel very Swedish, it’s also my only passport. I sound very American, people assume I am. Until they talk about some American cultural things with me. But when I’m in Sweden, I realise how completely un-Swedish I am… I feel most at home in the US though, as an outsider there. Lifestyle-wise I fit in, and who wouldn’t: I was in T-Shirt and shorts three days ago in Santa Monica. Home was Japan, I spoke the language fluently, but I never became Japanese. You never completely blend in, and that is why I held on to my Swedish identity very much…’

What do you think is typically European? Maybe having spent so much time outside Europe can help you identify what we have in common?

‘This continent is so varied; maybe it’s more what it’s not. Opposed to oh, we’re so similar. The Europeans are not something else, you see what I mean? Of course I can answer the question saying we have the common market, history, etc. And there is one typical thing, and that’s family life. In the US we never did things with the children plus parents, with two or more generations. Whereas here, all ages enjoy the same thing. An intermingling of generations. It’s important. If you go beyond the cliché differences, it’s harder to find them… And at least the Brits have their Sunday roast, where they get together, it’s something.’