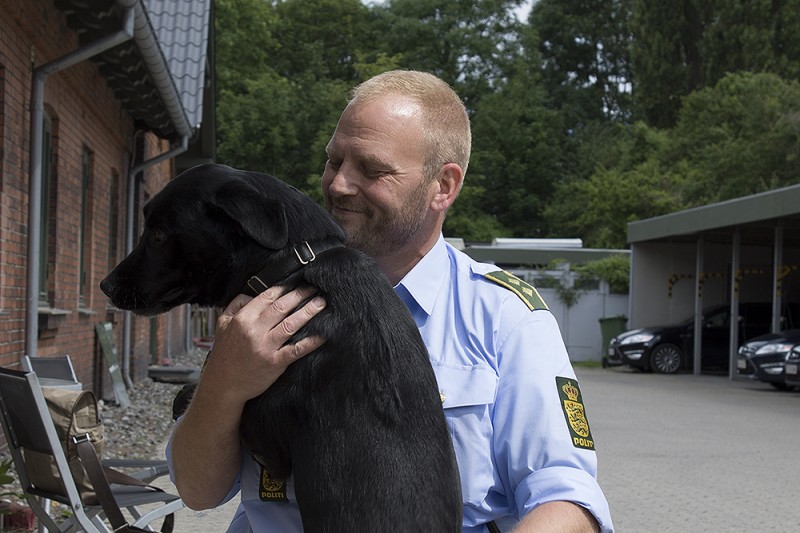 ‘This picture was taken just after we arrested the guy. A serial killer and rapist, just a couple of years back. We were searching the crime scene, and we had expanded the search way out, when more or less on the border, the dog found a condom, which ended up solving the case. And leading us to him. And here you see…’ John is showing me around Copenhagen’s dog department, where patrol dogs and dogs trained to detect explosives or narcotics are kept. It’s an odd place: a non-descript building outside the city centre, near the woods, where the dogs can be trained. There are a couple of rooms serving as offices, a canteen/meeting room, a large locker room and outside there are doghouses.

Where is your dog?

‘She is in the car. You’ll meet her later.’ She, not it. John’s dog is far more than an instrument, something he works with. ‘Most people who are dog people get attached to their dog. But we have something extra. Because most of our dogs have saved our butts at least once or twice over the years, we have an extra bond with them. We spend more time with our dogs than we do with our family. Because they are with us during working hours as well.’

‘In Denmark people trust the police and we can see that. Surveys are done every year, asking people how much they trust the police, journalists, and other professions. We usually come out near the top. I think it’s because we are here to help people, not to punish them.

There is a general tendency in Denmark, which may be the same in other countries, to show less and less respect for authority. So people are asking more questions. Thirty years ago a policeman could walk into a bar fight and say “Stop now, the police are here.” And they would stop and walk away. Today, it is not that easy. And sometimes you have the feeling that it is not until the police arrive, that the fun actually begins.’

Has the Schengen agreement changed policing?

‘I would say that completely removing all border controls was probably not the wisest thing to do. At least not at the speed at which it was done, because from my point of view, it seems like we are opening Europe, but we are not adjusting the laws accordingly. For example, some years back – I don’t know if this is true today – you could buy rifles in Belgium up to a certain calibre if you were 18 years old. In Denmark, you cannot do that. It takes two years of membership in a shooting club to do that. If you remove all the border controls, anyone can drive to Belgium, buy a rifle and bring it back to Denmark. With little chance of being caught anywhere. We see a lot of weapons coming in, from Eastern Europe, judging from the kind of weapons. We see a lot of pepper spray, stuff like that, bought in Germany, in the streets today. I would not say it couldn’t have gotten here, even with border controls. But it is too easy now. The other thing I see in my work is that a lot of citizens from countries with a lower living standard come here to find jobs and a better life, which is quite understandable. The problem is, we don’t necessarily have these jobs, so they come here and have nothing to do. And some of them turn to crime. Which is, in my book, a big problem.’

How would you deal with the problem?

‘I don’t know. I would say that today, as a EU citizen, it’s very, very hard to get expelled from one country into another. And I think maybe they should look at that. I am not a politician, but we have people here who are sentenced over and over again for violating Danish criminal law, but they are still here. I am not comfortable naming countries, but the poorer part of Eastern Europe is over-represented as far as I know, although I don’t have the numbers. The thing is, the numbers give you one picture, while the reality that we see from the patrol cars is different. I don’t know which viewpoint is right, but I am leaning towards what I can see from my squad car on a daily bases.’

How is your contact with other policemen, in other countries?

‘I’ve been active in online communities with other police officers and the thing is that although we may do things differently we have the same spirit. I feel that anyway.’

Throughout the whole world? Or the Western world?

‘I’ve only been in contact with police officers in Europe and the United States. We are probably facing the same problems, but on different scales. And the mentality might be a bit different. I would imagine some southern countries may have a slightly different approach to police work, while up here we are probably a little more relaxed. But yes, online communities. There is an American site, called ‘Police link’, which has all kinds of police-related videos, policemen can upload them. In the United States they have a lot of dash cams in their patrol cars and many of these films are actually available. You can learn a lot from them.’

‘Mainly, most of what I have seen shows how bad things can get if you are not careful… In the United States pulling cars over is statistically one of the most dangerous things they do .’

Because people have guns?

‘Exactly. It’s dangerous for police officers there, and not at all in Denmark. We can’t compare the level of threat against police officers in Denmark compared to the United States. It’s two different worlds, thank God, and I hope it stays that way. But there are a lot of these videos and you can always learn something by watching them. And there are online chats, which is fun. ’

Do you also chat with, or have contact with European colleagues?

‘Yeah. I bumped into a couple of Swedish guys over the years and someone from Germany and France. In Denmark we do a lot of work with the Norwegian bomb squad. We train together, we have exercises together. And we cooperate with the Swedish police as well. And one week every year we visit each other, and send a couple of dogs over to take part in exercises. To make sure the way we do things is pretty much the same because we borrow assistance if necessary from the Norwegian and Swedish police forces and their dogs, and vice versa.’

And then he walks outside to his car (and no, of course it is not a hot, airless car), where his dog is waiting for him. His dog jumps out, a lovely, sweet Labrador. Who can find explosives as well.