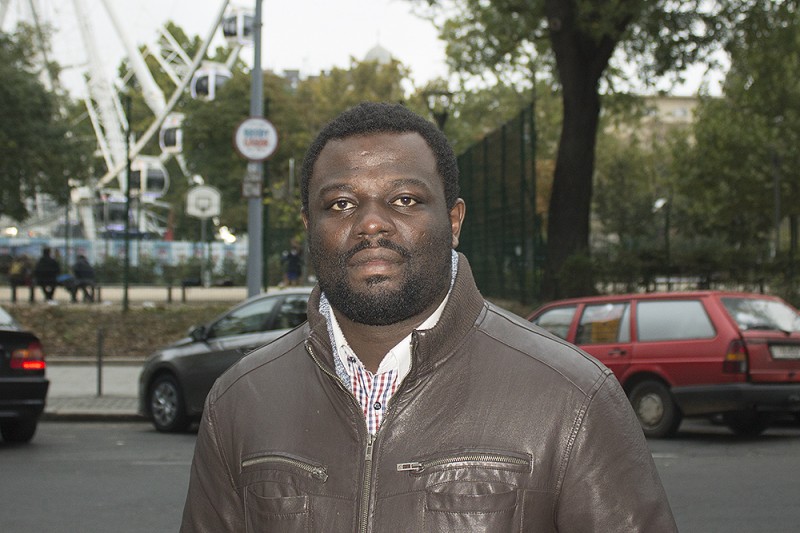 Many immigrants coming to Europe have the same heart-wrenching stories: moving to far-away countries in desperate search of a better life. Not Thierry. ‘I wanted to piss off my brothers’, Thierry chuckles. ‘They live in Germany and Canada, I used to fight with them all the time. That’s why I decided not to go live with them, but to make my own plans.’

We decide to meet in the lobby of my hotel, a mosaic of nationalities, swarming to business meetings or planned day trips in the town. Thierry awaits me, accompanied by his girlfriend. As he stands up I’m amazed by how tall he is. He wears a leather jacket with a dress shirt underneath, his shoes are carefully polished. Every inch a gentleman.

Originally from Cameroon, Thierry has been living in Europe for over a decade. After having worked in Sweden, Belgium and Austria, Thierry decided to return to his studies, this time in Hungary. ‘The University of Budapest had very good offers, including scholarship possibilities and a cheap place at the student hotel. So I decided to move to Hungary.’

‘You could just apply, no matter what nationality you have?’ Thierry smiles when he spots the somewhat surprised look on my face. ‘Applying was the easy part, but once I got there, everything was different. They told me the student hotel was only for Hungarians and that the scholarship was only 300 euros, which meant I had to pay the remaining 6,000 euros myself.’ ‘How did you manage?’ ‘The first year I still had enough money from Sweden. In my second year I was out of money, which meant I had to make peace with my brother’, Thierry laughs.

Thierry takes a deep sigh, visibly agitated by the memory of his school experiences. ‘So I decided to start working part time next to my studies.’

In the next few years, Thierry dropped his studies and worked several jobs. He appeared in several TV shows, always playing ‘the black guy’; fulfilling the demand for more immigrants on national television. ‘They wanted to copy the American TV shows; I wanted money. I was ok with that.’

‘But how do you feel about people gawking at you?’

Thierry shrugs his shoulders. ‘I feel pity. These people have never travelled, especially the ones outside the big cities. But it doesn’t hurt me.’

‘Have you encountered racism?’ ‘Of course. But it’s not the people on the streets; it’s the government and the institutions. For instance, I wanted to end my contract with my cable company. They asked me to sign this paper, everything was in Hungarian but they told me it was fine. I ended up signing for a twelve month extension. Or standing in line for half an hour, only to get sent to another counter, supposedly because the clerk can’t speak English.’

‘I read that the extreme right political party is quite powerful.’

‘The poverty in Hungary really helps the popularity of the right-wing parties. Poor people always blame the foreigners, which is a huge mistake if you ask me. There’s so much work we’d never be able to do because of the language and culture barrier. Plus, I’ll never receive my pension here, as I plan on going back to Cameroon. I give thirty percent of my salary to them.’

‘Does that bother you?’ ‘No, but I’m aware of this. When I get ‘special treatment’ because of my colour,’ Thierry says, air-quoting his words, ‘I remind them of this. I’m contributing. The only thing I ask from you is that while I’m here, you treat me humanely. I don’t want special treatment, not even premium treatment. Treat me normal.’

For a moment, we all sit there, letting Thierry’s words sink in. His friend breaks the silence. ‘For Budapest, the concept of immigrants is quite new. Hungary started to really develop in the last five years, as more and more multinationals settled in the country. If people are not open to foreigners, it’s simply because it’s new for them. Five years is a short time to get used to people that haven’t been here for hundreds of years.’

Thierry sinks back in his chair, caressing the velvet-like upholstery on the armrests. ‘The government should start a project to teach Hungarians the value of foreigners. Multinationals come to Hungary because it’s the centre of Europe, and foreigners can really help build up the country. But unfortunately, most people don’t see this. They grab on to anything to explain their misery.’

‘Would it be easier for you to have an EU passport?’

‘For Cameroonians, it’s not possible to have a double passport. A European passport means having to give up your Cameroonian nationality, like both my brothers did. When they go home, they have to apply for a visa. I would never do that, that’s painful.’

‘You’ve been to many countries in Europe. Can you tell what’s typically European?’ Thierry frowns, his forehead furrowing and his dark eyes staring into nothingness. ‘Typically European… How do you say that. Égoïste?’

‘Selfish. Europeans are often selfish. The first thing they think about is themselves.’

I smile; a bit caught off guard by the proverbial mirror Thierry is holding up to me. ‘Why is that?’

‘In Africa, the government does nothing for us, which forces people to build a social network. When I was younger, I would never go to bed hungry; everywhere I went I got fed. I even went to play with certain friends because I knew there’d be good food’, Thierry laughs, stretching his hands palms up as if he’s begging for food.

‘A higher level of social security makes it unnecessary to take care of each other.’

‘Exactly, that’s why people are so cold in Sweden, for instance. If you break your leg there, the government will send you a car to bring you to school. You don’t need to ask your neighbour for help. And that’s why people don’t really feel connected.’

The dark side of social security.

‘How about Europe as a whole? There’s no such thing as a European identity yet, as there is in Africa. Why do you think that is?’

‘I think in Africa people focus on similarities, whereas in Europe you concentrate on the differences. In Europe, everyone wants to travel to see what it is like in other countries. I have no desire to go to Guinea and see what’s it like, because it’s probably the same black men dancing in the streets and talking too loud. In my eight years here, I have never seen just one Europe.’

‘So the EU doesn’t work, it’s not alive?’ ‘Maybe it does for the economy, but certainly not for the people. I’ve had friends complaining about how they hate Hungary because they cannot find a job. So I ask them: “You speak English, right? Or German? You can jump on the next train that will take you to Vienna in two and a half hours. People like me travel from Africa to Europe, crossing deserts and oceans, all you have to do is grab a train”. My friend said: “No, that’s not the same, what would I do there all by myself, what about my family?”’

Thierry raises his hands, a distorted look in his eyes. ‘That’s the whole point of the EU! If you want a better life, it’s around the corner. Go for it!’

‘Will there be a time when people find that better life in Cameroon?’

It’s already happening. I’m also thinking about going back to start my own business. Africa is the only place in world where the economy is actually growing. It’s a virgin market, everything is still open there. If you go now you can make a lot of money and be successful. I will go back one day, for sure.

‘So your future lies in Africa?’

‘In both places. I want my kids to grow up here, because of the stability. But I will make my money in Africa. People from Africa are not coming here for opportunities anymore; they’re coming for social security.’