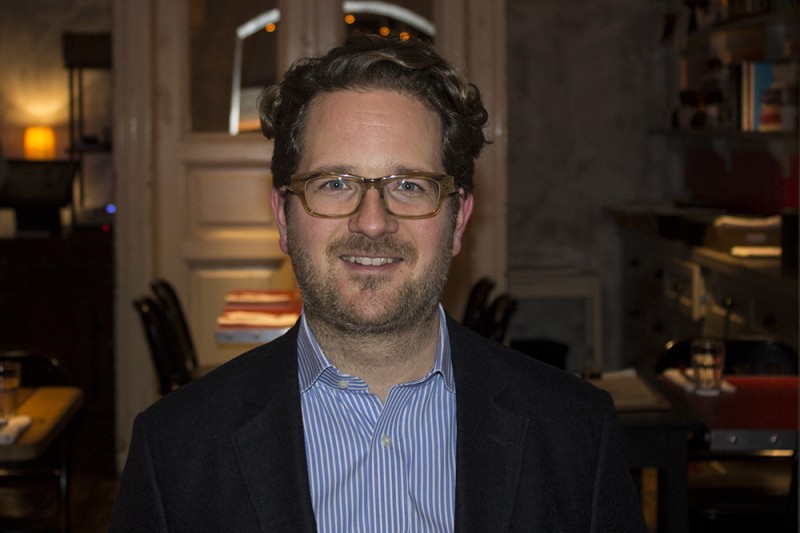 ‘It all began on Fortuna street, in 1982. My parents opened Café Pierrot. It was the first private café after the war, the first time the regime allowed such a Western place as a private enterprise. During the dark days of communism the cafe was a centre for artists, tourists, businessmen and all sorts of liberal and interesting people. Every star that has ever come to Budapest has visited this place.’

If the old city of Budapest was America, the Zsidai family would be its Rockefellers running the whole place. During the seventies, the family lived in the US, where Roy was born. His parents studied hotel management and became close friends with Roy Watson, the former president of the American Hotel & Motel Association.

‘He is my godfather, I spent many of my summers with him’, Roy reminisces. ‘He was the one who instilled the entrepreneurial spirit in my parents and later in me.’ Over the next thirty years, the family opened nine restaurants and bars, ranging from renowned pubs like Spíler to typical Hungarian restaurants like Pest-Buda.

‘Our mission is twofold’, Roy explains while he raises his hand to summon a waiter. ‘One is to bring back Hungarian gastronomy to the mainstream public, where it used to be before the world war. The other one is to draw the normal public to the Buda Castle, instead of making it into a Disneyland for tourists.’

We’re in Baltazar, one of the latest additions to the family empire. It’s a bar slash restaurant slash boutique hotel. Slash super hip. The room is filled with carefully selected furniture and warm colours. It looks welcoming, but I suspect that not every Hungarian can afford to share in the Zsidai lifestyle.

‘I read that you used to be a consultant?’

‘Yes, I didn’t plan on joining the family business when I was younger. I worked for the Deutsche Bank and the Boston Consulting Group, before my colleagues convinced me that my future lies in the hospitality business. After a management training at a small boutique Hyatt in Miami’s South Beach and an executive course at Cornell I came back to Hungary in 2006, and we opened the first restaurant under my supervision, 21.’

‘You have lived in several countries. What’s the entrepreneurial environment like in Hungary, compared to other countries? Is it different because it’s post-Soviet?’

‘Because of the factors you mentioned, there are always extra opportunities and extra difficulties. Because we are post-Soviet; because people are like that. But most of all, I see opportunities. I don’t think “can’t”, I think “can”, and I try to teach my staff that they have to think in terms of opportunities.’ ’But what can you tell me about the difficulties of the post-Soviet times?’

Roy stirs his coffee, clearly unhappy that I interrupted his positive message. ‘It makes it challenging to fix people’s mindset and attitude. Hungarians can be very good entrepreneurs, but their individualism can make it impossible to run a normal company. It’s very hard for them to follow policies. And unfortunately in certain areas of business, you have to do exactly what the protocol says.’

‘But that’s what Hungarians were used to in the Soviet days, right? Following the rules?’

‘Not exactly. We never followed; we practised “Goulash Communism”. First we sabotaged communism with capitalist elements, and nowadays we have “Goulash Capitalism”. Hungary survived hundreds of years by sabotaging the Turks, the Habsburgs, and the Soviets. And now the instinctive sabotage that allowed us to survive has become a limitation on our efforts to go forward. This is the time to follow some basic rules, like taking responsibility and taking care of ourselves, but we’re not doing it. It’s a sign of immaturity; we’re technically a child in its puberty. But it’s part of development. You can’t expect a country that had never known democracy and capitalism before ’89 to become westernized and become like Britain, where they’ve had several hundred years of private ownership.’

Roy pushes his horn-rimmed glasses further up his nose. His perfectly tailored velvet jacket and carefully tucked in dress handkerchief attest to an expensive sense of style, while his nonchalant beard suggests that running nine restaurants isn’t sweating him. Only his friendly blue eyes give away his softer side; but being a business man, he makes sure his mouth does the talking.

‘Does the government support entrepreneurship?’

Roy takes a sip of his coffee. ‘That’s an interesting question. I think the role of the government is overrated. Hungarians tend to look to others, wait for someone outside or above to hand them solutions. But there are a lot of things people can do without the government, just by having the right mindset. The government is just there to give these initiatives a boost.’

‘But still, I spoke to a lot of Hungarians, and most of them are poor. As I understand it, Hungary is not doing so well at all.’

‘I see you spoke to a lot of negative people.’ Roy narrows his eyes. ‘Not necessarily negative. Their wages are very low.’

Roy sits up and straightens his suit jacket. ‘Let me tell you a simple arithmetical problem about restaurants. When you open our menus, we’re fifty or even sixty percent lower in price than in Western Europe. However, our VAT is 27 percent and our costs are pretty much the same as in Holland, for instance.’ ‘Except for labour.’ ‘Except for labour. But tell me, how can I pay more for labour when my costs are high and the prices are low?’

‘So the government should lower the VAT.’

‘I’m not a politician, nor do I want to be. There are certain things I think they’re doing pretty well. There’s no significant unrest in the streets, like in Greece. But if you ask me, I would lower tax significantly and also the state expenditure on social benefits. Unfortunately, that would trigger the biggest outbreak the country has ever seen.’

Roy’s international business adventures aren’t the only things tying him to Europe. His wife worked at the European Commission and the Court of Auditors, before moving back to Hungary in 2008.

‘What’s the relationship between Hungary and the EU like? I feel after this week that the government is almost turning the EU into an enemy, in order to strengthen the national identity.’ ‘ Yes, sometimes it does. But they’re desperately fighting the right wing and trying to please the people who are moving towards the right. It’s very hard, considering that the right wing is financed by Russia.’

‘And you, personally, what do you think?’

The EU is a fantastic institution; it’s amazing what it has done during the past seventy years. After decades of bloody war it was the first institution to secure peace on the continent, I don’t think people recognize and appreciate this anywhere in Europe. And like our own government, they make a lot of mistakes. They’re very bureaucratic and could do a lot of things better. But it’s not a static thing, it’s growing and evolving and trying to find itself and its place in the world.’

‘But is there a European Dream? Some kind of vision?’

‘Maybe Europe is just not cool enough, yet. From a business point of view, how would you make Europe cool?’

‘It’s all about marketing. Europe is amazingly cool; we have thousands of years of history, all these national symbols, national foods.’ ‘But that’s all national, not European.’ ‘It is! Europe doesn’t mean we melt into one, or lose our own flag. Europe is the colour of all those flags combined. The US doesn’t have that, China doesn’t have that. We’re the group of people with the largest share of values and culture and we should be proud of that.’