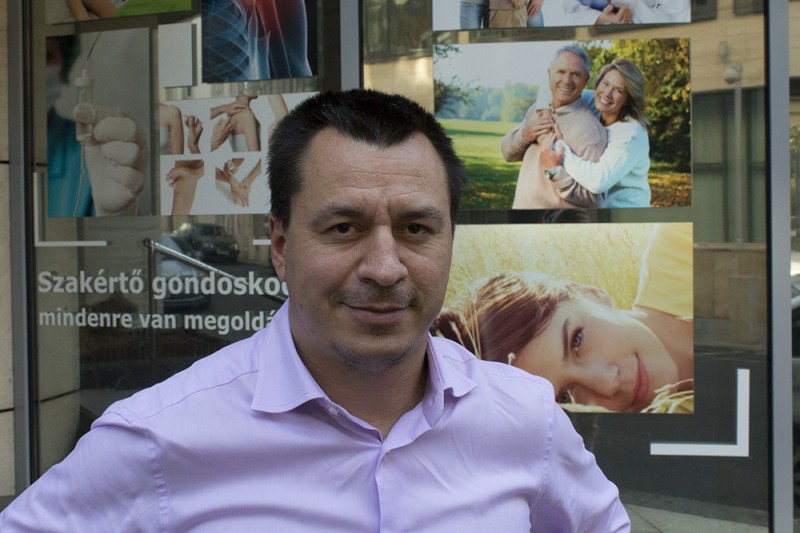 The Swiss Medical Center is not actually Swiss, Andras assures me. ‘One of the co-founders was previously a Swiss citizen, his experience with Swiss private medical care helped build the company.’ Whether it’s the about Switzerland or the reputation it has, a red cross in your logo is always a good bet.

He leads me through the narrow hallway, past a waiting room where a blonde assistant gives me a friendly smile. We sit down in a small office, Andras hands me a plastic cup of coffee. The walls are plastered with medical posters, stripping even the most intimate body parts of any romanticism.

Andras is one of the founders of Swiss Medical, a private health company that has thirty offices around the country and more than a hundred employees. The clinics not only offer basic medical care for citizens and businesses, but also physiotherapy and massages.

‘You’re not only a doctor; you’re an entrepreneur too, right?’

A nervous smile flits across Andras’ face. ‘You could call it that; I’d rather call myself a doctor who works a lot. Through this work the company grew and all the passion paid off. My motto is “first you give, then you get”.’

‘It’s completely different in size and structure. The private sector has a yearly turnover of around 200 million euro, whereas the public sector is worth more than six billion euros. Also, the private sector is not allowed to perform the full range of hospital activities such as surgery and emergency services.’

‘But you give that bit extra, like physiotherapy or massages.’

‘Yes, and we’re organized differently. I see that the public sector is often not organized well. The level of care is not good because the caretakers are often dissatisfied with their own life.’ ‘Their salaries are very low, right?’ ‘Yes, you’re talking about 200 to 400 euros a month, for nurses. Starting doctors earn about 500 euros a month. How old are you?’

‘Ehm, 45’, I stammer, a bit shocked by the amounts he has mentioned.

‘A doctor your age would still only make about 800 euros.’

‘That’s so little. And if he works for you?’

The door opens, a young nurse enters. After a cheerful ‘hi’ she starts chattering to Andras, while putting some medical instruments back into cabinets. Other than Andras serious attitude might suggest, the professional atmosphere seems to be very laid back. After her chat and a friendly nod in my direction she leaves the room, apparently unconcerned by how little she’s paid.

‘Why are the wages for doctors so low compared to other EU countries?’

‘This probably originates from the fifties. After the Second World War, the established social pyramid in Hungary flipped upside down. In the past, educated people and old money were on the top of the society, while uneducated people were poor. You could call it a feudalist structure. We had a short period of capitalism, from 1860 until the end of the Second World War. People made their own wealth, and the pattern of feudalism was broken. Unfortunately, communism ruined it all. All of a sudden, workers and farmers had to earn as much as doctors. The salaries and reputations of doctors and teachers were pushed back dramatically. They’re making ridiculously low amounts, far less than in other European countries.’

‘It’s also a threat I assume, these low wages. Because it’s quite tempting for them to go to other countries.’

‘It’s true. There are probably ten million Eastern European citizens working in the West. This creates tension, because they’re probably making thirty to forty percent less than an average citizen of those countries, even though it’s still double the amount what they would make at home.’

‘It seems like there are two distinct groups of emigrants leaving Hungary; those with minimal chances, and the brains.’

I think there are three. You have the college students moving to other countries via exchange programmes. Then there are craftsmen like plumbers and builders, looking for a better income, who only stay abroad temporarily. The third category is the big problem. Unemployed, homeless people, or gypsies. They can’t seem to integrate in the Eastern European so they move to the more lucrative systems where they receive social support and don’t have to work. And when they work…’

Andras looks at me with a revealing glance.

‘Exactly. That’s one of the problems in the EU; how to attract the people who will help build your country, and keep the troublemakers out.’

‘You are a manager; how would you manage this problem?’

‘It’s a very complicated situation. First of all, managing a company is much easier, as it’s not a democracy. I’m the founder and I have my own values for the company. If people agree with these values they join us, if not, they leave. In a society it’s different. You have to convince people to cooperate; there’s always a part of society that doesn’t accept the rules. So you have to draw a line somewhere. That’s the problem within the EU, there’s no coherent political agreement on how to treat problems. People working in Europe no longer have an antenna for social problems.’ ‘They’re not in touch with the people?’ ‘Right, because they never leave their glass tower. Which is very important, being the leader of a company. You have to know your own people.’

‘So the EU should choose one set of values.’

‘Exactly, that’s what I’m telling you! But it’s hard. Even for the smartest leader it’s not easy to choose five basic rules from a multi-coloured basket. Before it was easier, religion was the leading value that united the people.’