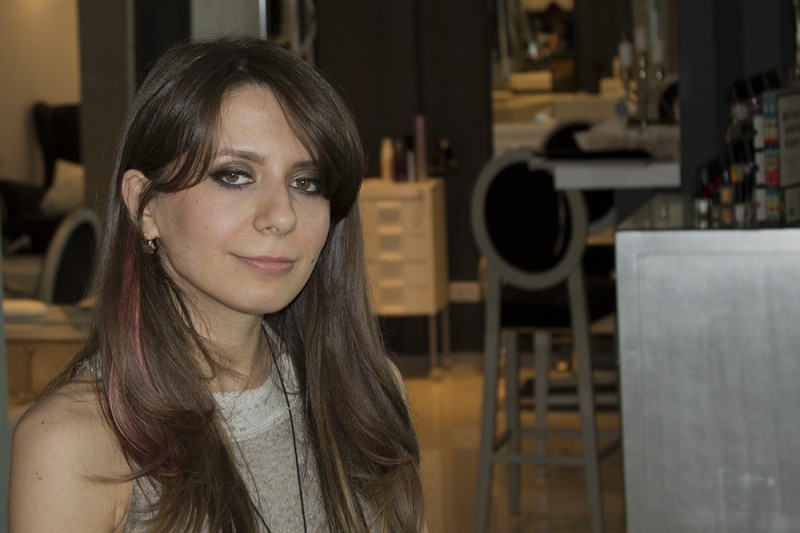 Bucharest is a very attractive city. With a lot of people and not enough roads: traffic is a pain. So when the taxi-driver had finally dropped me off, having taken the wrong road and accused me of stinginess because I refused to pay for his detours, Le Chateau would have almost closed if it wasn’t for its owner Diana.

‘I’m used to customers coming after hours,’ she says.

Pretty demanding and relatively rich customers: her shop is in Voluntari, in one of the better districts of Bucharest. Many of her customers are expats: Russians, French, Spanish, Portuguese, Austrians. ‘It’s like a little united Europe inside my shop.’

‘Why is your shop called Le Chateau?

‘I really like France. When I was three years old I lived in Brussels with my family.’

It’s a classy shop, I have to admit: two floors, with comfortable white leather chairs, chandeliers, grey and black wallpaper and some modern paintings. ‘I posed for that one,’ Diana (23) says, pointing at a blurry orange nude.

‘It’s still quite new, I opened last year, in March. At first it was a little difficult, but it’s getting better. I now have 7 girls working for me. Or with me. We try to have a nice atmosphere and be friends with each client. Get to know their needs and lifestyle. It’s important if they want a haircut to match their personal style. So we try to know their personalities.’

‘In Paris people dare to walk with green hair and an extravagant hairstyle. Is it the same in Bucharest?’

‘Romanians are more conservative. I think they like the American style more then the European. I worked at the salon of Vidal Sassoon in London. The style is completely different here. I can’t do the hairstyles that I was taught there because they don’t suit Romanians.’

‘Yes and those who have money to go there.’

‘Can you put into practice what you’ve learned there?’

‘No, not really. I use the techniques with really clean cuts, but I can’t do the haircuts that Vidal did because they are too short and very straight. They have angles and Romanians like natural hairstyles. As I said, they are more conservative, unfortunately.’

‘You lived in London and your family background is Austrian, your last name is ‘Klein’. Does it make you more European than someone who has only lived in Bucharest?’

‘I don’t think so. I also feel Romanian. I love my country and I love everything about my country – except the politicians.’

‘Yes, and they steal a lot from the common people. It is bad for the country and the way that the rest of Europe sees us. They compare us to the gypsies, because lots of them have gone to France and Italy. I have a Romanian cousin who lives in France and when asked he always says he is German. Only his best friends know he is Romanian. He is that ashamed… But I love to travel to Europe and see the cities. And I like the fact that we are all different. When I see a person, I play a game and try to guess if they are British or another nationality.’

‘And do you guess correctly? ’

‘Romanians always and 70% of the other nationalities.’

‘Would you have guessed that I’m Dutch?’

‘You don’t really look Dutch, you could also be British or German because of your blue eyes and blond hair.’

She giggles a little bit and says: ‘It’s kind of blond.’

‘You say we are all different, but would you say we have something in common as Europeans?’

‘I think we Europeans stick together. I think we have the feeling that we are all of a kind. We are all friends. It’s just a feeling. I don’t know why.’