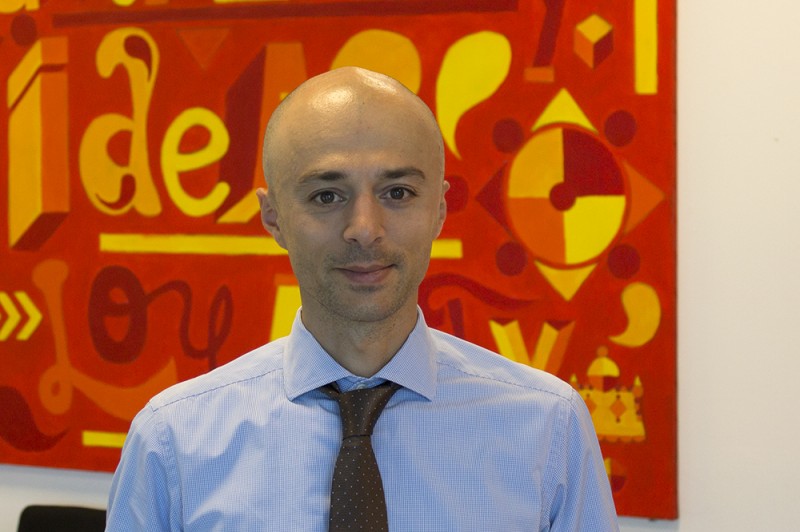 I agree to meet Andrei at his work. When I realize I’ve been sent to a large leasing company in the middle of Bucharest’s business park, I start to wonder whether I misunderstood Andrei on the phone. This surely isn’t the place where a local celebrity slash marathon walker slash do-gooder works? It actually is, the friendly receptionist tells me, as she calls Andrei to come pick me up from the lobby. When I confess my prior disbelief, Andrei laughs out loud. ‘Of course I still work here. Who else would teach my co-workers Pilates?’

Andrei is a small guy, who – I’m guessing – only has about 10% body fat. Not super skinny, not super muscular. Just super healthy. He’s an energetic man with a mischievous look on his face, and his loud voice commands you to listen to his stories. Perhaps not the mellifluous sound I would expect from an “ex-boy band member”. ‘All I was good for were backing vocals,’ Andrei recalls. ‘My hope was that singing in a band would increase my luck with the girls. We found some boys who could play instruments, and I practically became the manager because that’s what you do when you can’t sing. I was fifteen when we started with Gaz Pe Foc.’

‘People told me you guys were the Romanian Backstreet Boys.’ Andrei smiles. ‘I guess we were. We reached the height of our popularity between 1996 and 2000. We had a few number-one hits, but back then there were only twenty or thirty bands in the whole country. At that time, singing in a band wasn’t that popular.’

‘Maybe because under Ceaușescu , music was suppressed? Music was a new industry.’

Yes, especially bands were new. Bands were not promoted, only solo artists got attention. Making it on your own was ‘it’ back then; Ceaușescu was solo, everyone was solo. After the revolution, things changed. People started listening to English music, they wanted something new. We insisted on singing in Romanian though, and our popularity started rising during our college years. We didn’t have the crazy Backstreet Boys scenes with lots of paparazzi, the success came gradually.’

‘Did you have a large fan base?’

‘Yes, but very young, maybe seven or eight years old. My friends used to say: “Wow, you have so many female fans, lucky you!” And I would say “Are you crazy? These girls are way too young, I should have gone into hip hop!”’

‘After a few years, it became very tiring. I had a nice time, but we weren’t very organized. Sometimes we traveled 1000 km in two days, driving the whole night after a show. When I graduated from the school of economics, my dream was to work in a financial institution. So I went ahead and got out of the music industry. I started from the bottom, working as a marketing assistant. Ten years later, I had become a couch potato; I was 13 kilos heavier.’ Andrei forms an exaggerated big belly with his arms.

‘Well, I wasn’t a hamburger kind of guy, but I did have a lot of bad habits like drinking and smoking. The funny thing about gaining weight is that you don’t gain it overnight. If I would wake up one morning weighing 15 kilograms more, I would immediately call the ambulance. But when you add the weight over ten to fifteen years, you hardly notice it. My wake-up call was my little boy of three copying me: lying on the couch aiming something at the TV as if he were zapping. That is when I decided to change my life, gradually. You know, I forced my colleagues to turn the airco off in the summer, because it gave me a cold.

‘You were cold all the time?’

‘Yeah, all the time. When someone got a cold in Bucharest, I was usually the second person to follow. Probably my immune system wasn’t that good. So that’s when my colleague sent me a link about the North Pole Marathon and said “This is perfect for you”. Of course, she was joking, but for me it became the perfect way to get out of my comfort zone, off the couch.’

After hearing about the marathon in October 2009, Andrei started a blog to raise money for the registration fee. ‘Also, I started to train on January 1st. That was hard; I was dressed like a mummy with twenty jackets on. Surprisingly, I was able to walk for twenty minutes in the freezing cold. I repeated this every day, wearing fewer clothes and running more km every day. I trained from five to seven in the morning, going to work afterwards and still being able to play with my children in the evening. I also changed my nutrition, eating healthy and banning meat.’

‘That must have taken a lot of discipline. Were you always that disciplined?’

‘No. I’ve always considered myself a creative person, and I always had the impression that discipline or orderliness would kill this creativity. But in fact what happens is when you structure your ideas, and you follow up your ideas, you’re actually becoming more creative. Look at Thomas Edison: he only had a couple of ideas, but he focused on those and did a lot of testing, that’s how he invented the light bulb. When you establish goals, you have to take steps to achieve those goals. Most people, including my former self, imagine that being successful in one area of your life is a matter of luck, context, a straight line. But it’s not.’

‘So it actually did not take a huge amount of discipline, it was a change of mindset that became a habit?’

‘Yes! I don’t believe in motivation, motivation usually helps you start things, not to stick with it. You don’t need motivation to get up every day, or to brush your teeth. It’s a habit. For me, running became a habit; I feel weird not doing that. If you don’t wash for three days you feel weird, if you don’t wash for twenty days you start to feel normal again, creating new habits. So that’s my daily job, creating new habits, holding on to them, from time to time checking where I am on my path to my ideal self.’

In 2010, Andrei ran the North Pole Marathon, described as the hardest marathon on earth with temperatures dropping below minus 30 degrees. Andrei glows with pride when looking back on the experience. ‘It’s funny, because it didn’t really hit me until the doors of the plane flew open. We couldn’t see anything because it was very windy. The Russian pilot told us – Andrei looks grumpy and says with a thick Russian accent:“See you in a few days… if the weather allows it. Bye bye.” And he left. The first air I inhaled completely froze my nose. I’m used to cold temperatures, like minus twenty. I thought minus 40 was not such a big leap, maybe like the difference between zero and minus twenty. But the wind made it very difficult, as well as the humidity. Still, we humans have an extraordinary ability to acclimatize, getting used to any circumstances. I think this is one of those life-changing experiences.’

After the North Pole Marathon, Andrei decided to run a marathon on each continent, something only 200 people had done at that point in time. His wife and kids started to exercise as well, following his example. ‘Even my mother started to run, this must be the craziest win of what I’m doing,’ Andrei smiles. ‘When I announced my trip to the North Pole, she said: “If you’re going to the North Pole, I will not talk to you any longer!” She persisted for six months, now she’s also working out.’

Inspirational story. Is that a goal of yours, to inspire people?

I feel really good when people write to me, whether it’s via email or to my blog. Three years ago, no one was running in Bucharest. Back then, if you were running through Bucharest, people would look around to see if the police were chasing you. Today, I get messages like “Because of you, I started to run, took my bike off the balcony, started to paddle, etc.”. I made a contribution, however big or small, to this.’

In 2010, Andrei spoke at TED, a platform for progressive talks on design, technology and other fields of science. Immediately after this he decided to use his influence to promote a fundraising culture in Romania. He launched several good causes that were funded by sporting events, while helping other organizers to do the same. ‘It’s meant to be copied. More and more events have fundraising attached to them, that’s how we create a culture. And the platform was created with the support of this very company I’m still working for after all these years.’

Creating a more socially engaged private sector was not only a dream, it turned out to be a necessity, as Andrei discovered. ‘We in Romania don’t believe in politicians anymore. After 1990, in the first elections, 99 percent of the Romanians voted. There was a desire to vote, because democracy was something new. Unfortunately, the politicians made a lot of promises, but none of them were kept. I consider them to be bad project managers, the state being the project. We don’t have big expectations from them, which actually is good because then we focus on our projects and what we as people can do. We don’t expect help, we just expect them not to bother us.’

‘That’s a pity. How about Europe?’

‘Europe is a different thing. I firmly believe in a world without borders, so we can travel anywhere. I mean, the internet itself is one big country without any borders. Information travels freely, and we should do the same thing physically. In 2000 years, people probably won’t be identified by their color or their nationality; we’re all from the same planet. So even when the bigger project of the EU is failing, people will keep connecting. I mean, the EU was a platform designed to help people connect more. So that’s what we’re doing.’