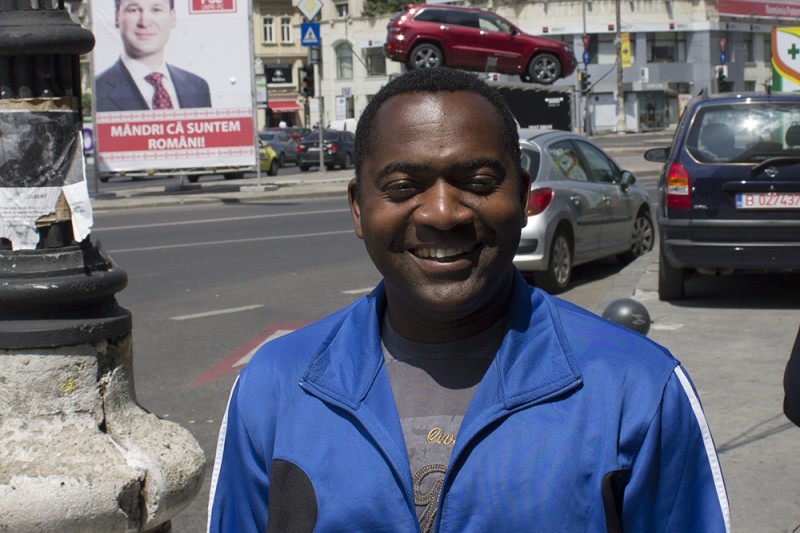 Aimée has been a bit of a celebrity in Bucharest ever since The New York Times published an article about him and his football team. Not because they qualified for the Champions League: they play 5th division. But because it’s a band of unlikely characters, including Aimée who is the only black coach in the country, and a goalkeeper with just one arm.

‘All of a sudden we had camera crews from national television at our training.

People recognise me on the streets now.’

Fortunately not everybody. We can still have a quiet chat in McCafe in Piata Unirii. Aimée looks like a football player, especially when he is sitting : blue tracksuit, white sneakers, legs wide apart, phone on the table. So we first discuss football, that’s what men do, and we conclude that most of the top Congolese football players have joined other national teams.

The son of Congolese diplomats he came to Romania to study in 1991. When the civil war broke out in his home country, he decided it would be wise to seek political asylum here.

‘I’ve completely adapted to Romania,’ he says. ‘I’m married to a Romanian woman, I have children, I pay taxes.’ He has worked as a guard, at a chicken farm, in a restaurant, at a swimming pool and now he has a construction company. And he has a shop at the beach, selling souvenirs. Leather wallets, watches.

‘Is hard work part of the Congolese mentality?’

‘No, there are also very lazy Congolese. Here salaries are low compared to most European countries. The average salary is only 600 euro per month. If you want to make more, you have to work hard. There are easier ways to make more, of course, especially in my branch. But I choose not to, because sooner or later they would find out and arrest you. I prefer to be correct.’

‘It started with learning the language, barely anybody spoke French, so I had to. I learned it myself, by talking, playing Scrabble.’

In the couple of days that I had spent in Bucharest, I had not seen a lot of black people. ‘And there were probably even fewer in 1991. Why was that?’

‘In 1991 it was a problem. Romania was a closed country, they weren’t used to black people. When I walked down the street people reacted, some nicely, some liked to provoke. I always told myself that they didn’t know what they were doing. They’re curious, but a bit too aggressive. When you’re somewhere new, you have to accept the good and the bad things of a society.’

‘Yes, they’re used to us. They’ve seen people of colour, black or yellow, in the streets, but also in the movies or on TV – though of course there still are racists.’

‘Has membership of the EU changed things in Romania?’

‘A lot. Before Romanians didn’t worry much about hygiene. In shops they grabbed food with their bare hands, now EU-regulations prescribe gloves. Or raising chickens: in the old days, the farmers fed them everything. You can’t do that anymore. But even for us, refugees, things have changed a lot. We can travel, for example, before we couldn’t.’

‘But you could always travel with your Romanian passport, couldn’t you?’

‘Sure.’ And he tells me a story of bureaucracy, of his temporary status, which needs to be extended every year, how he’s been refused a passport for 23 years because there are always new requirements that have to be met. ‘Even though I have a company here, a house, a Romanian wife, everything. People come to me for advice. I’m well respected. I have passed all stages to integrate, but still. And everybody who hears this, is as surprised as I am.’ And even Aimée, who looks like a calm and collected man, loses his temper when telling me his story. Who can blame him? One month would be enough to anger me, let alone 23 years. ‘I’m not afraid they’ll send me away, they can’t tell me to go home – I am home. A little respect please.’

‘European elections are being held this coming Sunday. Can you vote?’

Aimée sees a woman having trouble entering the McCafe, quickly gets up and helps her.

I had seen large billboards in the streets, carrying campaign slogans. Vote for me, choose us. But although they are there for the European elections, what really matters are the presidential elections in September. Aimée says: ‘I’ve seen a lot of presidents, but the current one is good. He comes and talks with the people. He explains why he is raising taxes. This one rules with an iron fist. It’s like the Congo. It’s not enough to have a good president, it’s important that the people around him, his clan, are okay too.’

‘No, they steal big time. They are arrogant.’

‘And do you think that the politicians in the European government are better?’

‘No, they take it more slowly and less visibly. And the Romanians don’t respect the European parliament. They send people who completely lack experience. The good ones stay at home.’

Outside the McCafe, just before we part, he has a few words of advice for his fellow refugees. ‘Be like the Romanians. Work! Integrate! Take a language course, they are free. Many lean on social support for far too long. I am proof that with hard work you can have it all.’

All, plus an article in the New York Times.