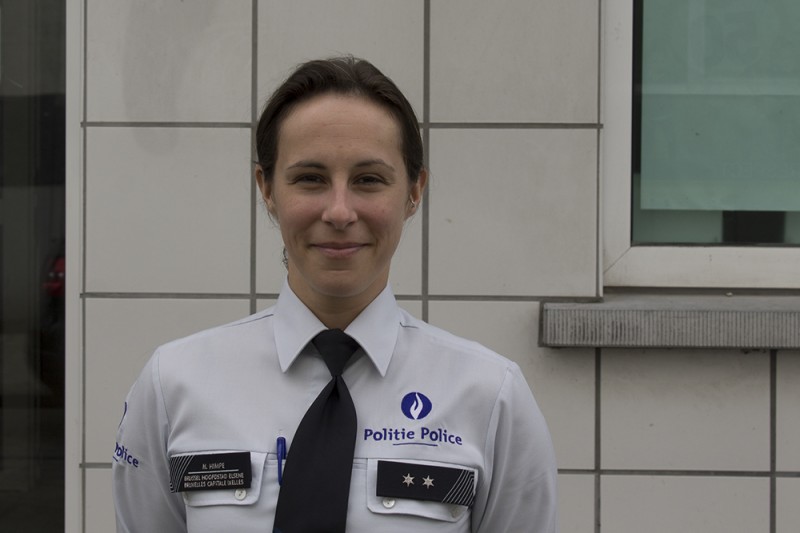 ‘It was a childhood dream to become a police officer,’ Nancy says, smiling as if she recalls all the times she dressed up as a cop when she was young. ‘The many sides of this job really attracted me. One goes on patrols, one helps the citizens. In one intervention, you must shift between many emotions: strict, empathetic, back to strict. It’s like acting, in a way.’

’What role suits you best?’

Smiling: ‘I think the stricter one. It’s all about compensating when you’re a small woman like me. I’m known for being quite a cool girl, you know.’

Despite the interview taking place in a small, dim interrogation room, cool isn’t the first thing that comes to my mind when I look at Nancy. Her hair is tied back in a bun, revealing a friendly yet earnest face that doesn’t match the stiff uniform she’s wearing. She looks a bit shy at first, but the more she talks about her job, the more I realize it’s not height or strength that makes her cool. It’s her pride.

‘You seem very open and transparent about your job.’

‘Sure, why not? I see it as my role to present people a different view of the police. Random people post videos of us arresting someone on YouTube, without telling the whole story. And the media don’t do much better.’ To attract more members into the Belgian police force, Nancy participated in a small recruitment film in 2010. The clip looks like a mix of your average CSI episode and an ad for a Hollywood blockbuster. ‘Filming this gave me goose bumps. It took me back to when I was a child, dreaming of joining the police force.’

You’re an inspector now. What is your dream for the future, becoming a commissioner?

Not necessarily. As a commissioner, you’re stuck in an office all day, organizing everything that happens on the streets. I don’t care for that, I’d rather be on the streets. A chief inspector on the other hand, that’s a job I’m striving for. You have more competencies than a normal inspector, like taking people into custody and managing the inspectors. It’s a much more exiting job.’

The small police station we’re in is situated on a quiet street flanked by tall elms, in the calm Dansaert quarter in the center of Brussels. It’s the kind of neighborhood where policemen leisurely stroll – or even better, bike – around, talking to passing pedestrians and giving them a friendly smile. Looks can be deceiving though. ‘I’ve been with the police for twelve years, and people have definitely become more cheeky. People don’t just accept our authority anymore, they talk back and aren’t afraid to use violence. They are used to pointing their finger at someone else, you know? I can see a lot of my colleagues growing increasingly dissatisfied and tired of their job, wrongly if you ask me.’ Why? ‘Of course I also have those days when I feel this work is very unrewarding. But it’s our job not to get carried away by emotions. Like I said, it’s like acting.’

Nancy works in Brussels, but prefers to live in a quieter area a couple of kilometers outside of town in the Flemish part of Belgium. She speaks Dutch/Flemish as well as French, as opposed to a lot of Brusselois who only speak French. The language barrier seems to illustrate the ever-growing hostility between the Flemings and the French-speaking Walloons.

‘What do you speak during lunch, for example?’

‘French. It’s still an issue, a lot of my colleagues don’t speak any language other than French. It’s a hassle, especially when we have to help Dutch-speaking victims or deal with arrestees.’

‘Do you think your Walloon colleagues should learn Dutch?’ Nancy shifts her position, visibly uneasy by this question. ‘Well, I don’t know… you can’t force them. Some of them only stay here for their traineeship, should you force those people to learn Dutch? It’s unfortunate, but you know…’ What is it, a different mentality, perhaps? ‘There’s definitely a contrast in mentality. But you know what? I get along better with the Walloons than the Flemish, to be honest. They’re much friendlier, Flemish people are more reserved.’ I thought you were the cool type as well? Nancy starts laughing. ‘True, I guess I’m the perfect balance between the two.’

‘Brussels is the unofficial capital of Europe. What does Europe mean to you?’

‘Not a lot. It’s nice for people to travel around freely, but criminal organizations do that as well. They come to Belgium thinking it’s some kind of “promised land”,’ Nancy says, emphasizing the words with a sweeping gesture, ‘without having to pass any control at the borders.’

‘So, what do you recommend?’

Nancy sighs and takes a sip of her water. ‘More control at the border, especially on the highway. We should keep a record of who comes in and goes out, otherwise people can tell you anything about themselves. If you don’t know where they’re from, it makes it so much harder to send them back – no native country will take them back, it’s a vicious circle.’

Do you feel European? Or just Belgian, or Flemish? Belgian. I’m not into the whole division between the Flemish and Walloons. Just Belgian. I don’t think I feel European, it’s just a fact for me that I am one. I had traveled to several cities in Europe, but I haven’t once felt like: these are my fellow Europeans, I feel so connected to them.’ How about your fellow policemen in Europe, do you compare yourself with them? ‘Yes, of course.’ Nancy’s face lights up again, relieved that we’re back onto a subject she’s passionate about. ‘It’s interesting to look at your neighbors, their mentality and structure. I do think that the police in Belgium are less strict than in other countries, though. You don’t want to smart-mouth the cops in Italy.’ Nancy smiles at me with a playful look in her eyes.

You’re a strict police woman too, right? What do your friends think of your job? ‘They’re not surprised, I’ve been talking about becoming a cop since I was young. Some don’t like it as much though. They’re afraid to tell me things, because of the bad name the police have.’ So no wild stories about drugs and stolen bikes anymore? (laughs) ‘No, luckily my friends aren’t all that bad. But they definitely tell me less now.’