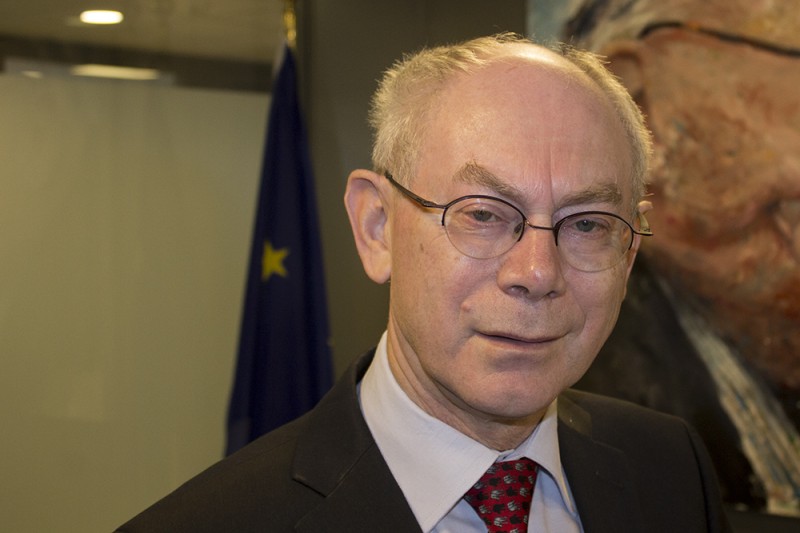 No, he does not have Obama’s swagger, or the raw charisma of Putin. Those are my first thoughts as I follow Herman van Rompuy up the stairs to his room in the offices of his party, the EVP. His former party, actually, because he has not been the head of the European Council since 1 December. He has more time now, and my 10.30 appointment is his first this morning. A slight man wearing a long grey coat and carrying a beautiful calfskin briefcase. He unlocks the door, switches on the light and hangs up the grey coat before sitting down on a small couch next to a European flag.

‘Go ahead,’ he says, and I immediately start off on the wrong foot. ‘The EU was originally an economic union,’ I manage to say before he interrupts me, his eyes flashing behind his glasses. ‘That’s typically Dutch, and it’s incorrect. The underlying motive was peace, no more war. And the economy was the means of achieving that, not the goal. I see that the debates in the Netherlands, and certainly in Great Britain, focus primarily on economic motives’, on “what’s in it for us”. The extent to which people are in favour of or against the EU is determined by how much it benefits the calculating citizen. The founding fathers of the European Union sought a way in which to put an end to centuries of wars and they looked at the most pragmatic way of doing so.’ I get the impression that Van Rompuy has told this story at least 10,000 times, but he remains tirelessly didactic as he tells it once again: ‘It was done via coal and steel, the basis of the weapon industry, by taking it away from national governments and giving it to a supra-national authority. The ECSC, and later the EC, eliminated the internal borders, and imposed a common external tariff. When that had been accomplished, there was a move to create a common market, and finally to introduce a common currency. It was a gigantic leap in terms of integration and an enormous ceding of sovereignty on the part of the nation states. But throughout that period, the economy was an instrument.

We have successfully avoided war for 70 years. Do we need a new goal, preferably one that is more appealing?

‘That has actually already happened in the EU’s history. After the signing of the peace treaty by the founding members and Great Britain, the EU moved on to the second phase, anchoring its democracy. Spain, Portugal and Greece joined the EC after the fall of the fascist regimes. And all of the former communist countries have joined. They belong here because they are part of the European Union’s democratic project. Of course, a market has opened up. Take Poland; with a population of 38 million it had the same per capita GNP when it joined as we did in the 90s. Now Poland is three times as rich as when it joined.’

I noticed during my travels that the new countries, the new democracies, are happier with the EU, than we are here in the West. People here take the wealth and peace for granted. When I ask people what the advantages of the EU are, students always say the Erasmus programme, and being able to travel freely. Isn’t that disappointing?

He shrugs his shoulders. ‘But also very human. Peace has almost become a given. But people should think twice, in view of what is happening around us. A war in Ukraine. And on the southern border, from Afghanistan to Nigeria, the whole area is at war or unstable. While good old Europe, which was always at war, is completely stable. And people should be asking themselves how that happened…,’

But they don’t do that…

With a note of irritation: ‘I accept human nature as it is. Once you get used to something, you start to look around for other things. I have learned from my political mentors that life, society in general, is a mixture of one’s interests – usually economic interests – and one’s ideas and ideals. When the latter are weaker, other interests move to forefront. And that is where the calculating citizen comes into it with the question “what is the added value?”. It’s a terrible expression. And people forget that a calculation can be either to your advantage or disadvantage. The overall picture is more valuable than a simple calculation of added value.’

In a recent article in a Dutch newspaper, Juncker accused the Dutch government of doing too little to drum up enthusiasm, for example, for the referendum on the European constitution. People are aware of this, in other countries as well, where national governments make little effort to promote Brussels.

‘Yes ‘ he says, his tone still sharp. ‘You’ve put it very mildly. The opposite happens. What one often sees is that government leaders meet in Brussels, take unpopular decisions, and when they get home, or worse, even before they leave Brussels, they give a press conference in which they distance themselves from those decisions. As if they have not been part of that decision-making process! How can you expect to galvanize public opinion, which is already full of doubt about government in general, if your own leaders distance themselves from their own decisions?

It must be frustrating.

‘Yes. [Political leaders] move in a certain direction because they know that public opinion is sceptical. They take advantage of this by suggesting “we are not such Europhiles ourselves”. When faced with populist movements, you can choose between two attitudes: you can say they’re right, and pander to them to a certain extent. The result is a tendency to choose the original instead of the copy. That is, to choose a real populist or Eurosceptic party. The other stance is to state clearly that you do not agree. This has the advantage of being unambiguous. Pegida is a recent example of this. Merkel has said: this is not part of Germany, I am adamantly opposed to it.’

I may sound idealistic, but doesn’t the mistrust provide the EU with an opportunity to succeed where those infernal national politicians have failed? If all the star pupils are in Brussels, if Brussels can be the best that Europe has to offer in terms of political planning?

‘But that brings me back to what I said earlier: Brussels barely exists as an autonomous body. All major decision are taken unanimously. The European Commission is important, but it does not decide; it only puts forward proposals. Legislative authority rests with the Commission, the Committee of Ministers, which is to say the member states. What I want to say is that the union is the member states. And they take decision unanimously. So your proposals, however noble, are at odds with the actual situation.

You are of course still young, but you saw the birth of the EU. What was your experience of it?

‘ I grew up with the idea of Europe. At the Jesuit college here in Brussels, where I was a student from 1959 to 1965, the teachers encouraged our enthusiasm for the concept of Europe. Every year there was a sort of mini-Erasmus project, and around ten interested students travelled around Europe for 14 days with other boys – unfortunately only boys at the time – from Nijmegen, Berlin, Genoa and Evreux. You came out of that as a European. No longer focused on your little group. It is sometimes said the period which gave rise to the European Union was the most noble in Europe’s history, and that was our experience as well. In the flush of idealism, there was even talk of the end of the nation state. And I have kept that drive. I have not lost it in during my five years in the European Council.

Ach…in Belgium we already have different identities. I am a Belgian, I am Flemish, but I am also from a particular region, maybe a village. We have a strong sense of the complementariness of those identities. For us, the European identity is an important part of this. But what it feels like? He is turning the question over in his mind, rephrasing it for himself. ‘To make a negative comparison, we are not Americans. Not Russians. Not Asians.’

We share a large number of Western values with the Americans.

‘But there others we certainly do not share. The social welfare system for example.’

That is something typically European then.

‘And the relatively equal distribution of income. In that respect, in terms of negative comparisons, there are many things specific to Europe. People who travel experience this as well. They feel at home when they return to Europe. We can make progress in this area in the years to come. Europe has for too long been a space instead of a place. Europe is still young, just 70 years. Many nation states are hundreds of years old. You feel at home when you feel protected, the way a house protects you. In Europe there is tension between space – freedom of movement in all respects – and the protection that a house is meant to provide, because now it welcomes people that you might not want to invite into your house. A sense of identity is tied up with a sense of feeling at home.’

But don’t you have to construct an identity the way you would furnish a house? Fill it up it, as it were? Could that be accomplished with the help of that attractive flag over there, or a national anthem. Should we have more of that?

‘People are not fools. As long as some things have not been stabilized, in terms of the Euro zone, the whole issue of freedom of movement and immigration, you can wave your flag, but it won’t make much difference. First the economy has to grow so that people can see that the measures taken over the past few years have served a purpose. And terrorism, yes,’ he has a sudden afterthought. ‘This is the perfect moment and opportunity for a united Europe to act against terrorism. But I am not convinced: what I’m hearing now are the same old stories about intelligence agencies not wanting to share information. Enfin, one has to provide substance before one starts waving flags.’

‘So am I, an Anderlecht fan.’ His tone changes, the mood is suddenly lighter.

I’m a Feyenoord fan. The 2020 European Cup finals will be played in different cities instead of one country. I think that’s a great idea.

‘A brilliant idea put forward by UEFA’s Michel Platini. I also read an article that proposed a joint European Olympics team. It would be the biggest medal winner by far.

By way of a parting gift I give him a copy of my first novel, The Parvenu. As he is sometimes known as Haiku Herman, I sign it as follows:

My first ever haiku, composed in the metro.

No, Herman van Rompuy doesn’t have a lot of swagger. But I can imagine that he was the president that Europe needed: intellectual, dedicated, accessible. A bridge builder. A thoroughly decent man. Are there many politicians around these days about whom we could say the same?