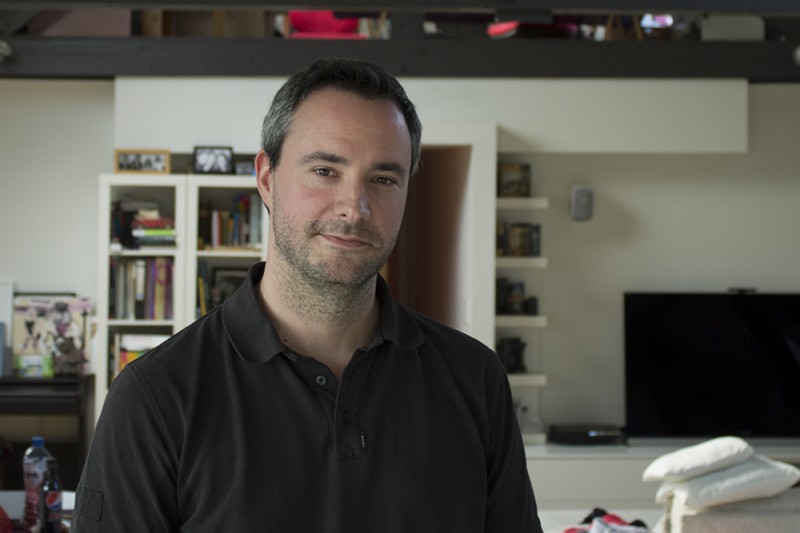 Belgium could be a sort of mini-European Union with its Flemish, Walloon and Brusselois population, speaking both Flemish and French. If that is the future of Europe, Brussels -based doctor Benoit is not optimistic. ‘Belgium has too many governments: a federal government, regional governments and local communities. I think it is horrible, our political system is way too complicated. I believe there are many dozens of ministers at this moment. When my daughter is older and wants to know how our country works, I do not think I will be able to explain it to her.’

We meet at his Anderlecht loft apartment, which has big industrial lamps hanging from the ceiling. ‘This used to be a sewing factory,’ he explains. Now it is above all his little daughter’s playground: toys and stuffed animals are scattered everywhere. Benoit, who with his two-day beard is not immediately identifiable as a doctor, has just returned home from a day’s work at Charleroi, some 50 kilometres outside of Brussels. We sit at the kitchen table and discuss politics. Two languages: for years Belgium has had a deep political division running through the country: not left versus right, but a division that pits the Flemish against the Walloons. Years of political conflict has led to a deep distrust between the two linguistic groups. Benoit: ‘The current climate is so angry, so aggressive that I do not even want to speak Flemish anymore. Flemish people are convinced that no Walloons speak their language, so they make fun of you in Dutch while you are right next to them. They promote their culture in a very aggressive way, in a sometimes extreme nationalist way. Maybe they are right though, in their prediction that Belgium will not be able to survive, because they’re doing everything to split it in half.’

‘How could this current climate develop?’

‘Many Flemish feel that their culture, their language is threatened. The last few years have been about the facilités linguistiques in the suburbs around Brussels. In those municipalities the official language is Flemish, because they are located on the Flemish part of Belgian soil. Because French-speaking people living in these regions are in the majority, they can demand, as a favour or service, to receive mail and be allowed to do all their public administrative work in French. The last few years the Flemish government has tried to stop offering such services and force French-speaking people to do everything in Flemish. But it goes further: If you live in those villages and speak French, you cannot put a sign in French on your house or communicate with the government in French. You will have problems buying a house or may have to take a language exam. Either you speak Flemish or go away. You can denounce your neighbours by saying they have a French sign on their house. It reminds me of the dark times during the war. Maybe it sounds funny, but in reality it is very shocking. That is what is happening in Belgium right now.’

‘Do you see a solution?’

‘I think the solution is to force everyone to speak both languages. That would be a first step. This was lost somewhere in our history. Big mistake, I think, because most Flemish people speak French. The opposite is rare! The only problem: French is the world’s 3rd language, Dutch isn’t.’(At home I looked it up: French is actually the 14th after Chinese, Spanish, English, Hindustani, Arabic, Portuguese, Bengali, Russian, Japanese, Bengali, German and Korean…).

‘Maybe Wallonia and Flanders will become regions in Europe, like Catalonia and Northern Ireland. Do you think that is a solution?’

‘Maybe. On the other hand, we do not have the Spanish temperament. We have a saying ‘compromis à la Belge’: Belgians fight for something they believe in, but only to a certain point. When they discover that a radical change would have certain bad consequences, they generally seek to compromise. If the country splits, I do not know if Wallonia and Flanders will come out of it. Wallonia really is the economically poorer part of the country.’

‘I don’t know. The king is most loved in the francophone part of the country, I think. Because he is French speaking. ‘

I myself hate football. But it helps. People suddenly get united. But this is only football, I think anything can be a uniting factor. You see, when I am abroad with Flemish doctors in foreign hospitals, it is always the same. They try to speak French, we start in Flemish and eventually everyone switches to one of the two. We then all agree that we do not understand what the language problem at home is about.’

‘That’s interesting, so then you do feel like you come from the same country?’

‘Yes I sometimes wonder if the problems at home aren’t just kept alive by a few very strong-minded politicians with principles they want to impose. The majority is not that radical. Unfortunately they do vote for those parties. But I think that is because the people with strong beliefs are always the most active in the media.

‘About your job, what kind of doctor are you?’

‘I am a vascular surgeon. Charleroi is a region with high unemployment rates, which often leads to smoking, drinking. So there are lots of vascular patients. When they seek medical help, they are often too late. Or they do not understand your explanations, and they have problems breaking the bad habits that have them put in the hospital.’

His wife, also a doctor, and his daughter arrive home. The little girl starts playing with her toys while her mother listens in on our conversation, adding her own comments now and then. ‘Does living in Brussels, the EU capital, make you feel more European?’

‘No, not at all. I think it is totally paradoxical. We are the capital of unified Europe, but we still have not fixed our own Belgian division. We live in a country where the names of towns change depending on whether you are in Flanders or in Wallonia. You drive to Mons, suddenly Mons is gone and you are expected to know that it is called Bergen now. If you are foreign you will get lost. That is the capital of Europe. I think we only remain the capital because the rest of Europe is unaware of our internal problems.’

Despite his harsh criticism of his own government, Benoit is very positive about the European Union. It is interesting to note that while he has almost given up on unity in his own country, he still sees the EU as the new unifying factor.

‘I think Europeans are stronger together. It’s important to face the power of the United States and all those emerging economies. I hope this unifying project will succeed.’

‘I do not know for sure. For myself it is a success. I have no problems travelling the continent, my diplomas are valid everywhere, the currency is very handy. You can focus on the people when you travel.’

‘I’m looking for European values. What is European, what are our shared values?’

‘We are the old continent. We have the common Latin heritage. I have travelled a lot to the US. They eat Belgian chocolate but do not know Belgium even exists. The people in Europe are more open to each other. In the US you can travel 2000 km and still be in the same country. In Europe you will see so many cultures. You have to realize you are European then. I feel like I belong to this part of the globe. Another thing: the food. American food is not authentic. Everything is pre-packed and plastic. We on the other hand have invented everything. Wine, cheeses, the best bread. I think I feel European because I am not an American. When I meet with other Europeans, we all have problems comparable to those we have in Belgium. It’s not that way in the US because it is a nation of immigrants. They are united and competitive. We are not. Not united and competitive.’

Belgium really does seems like a microcosm of Europe…