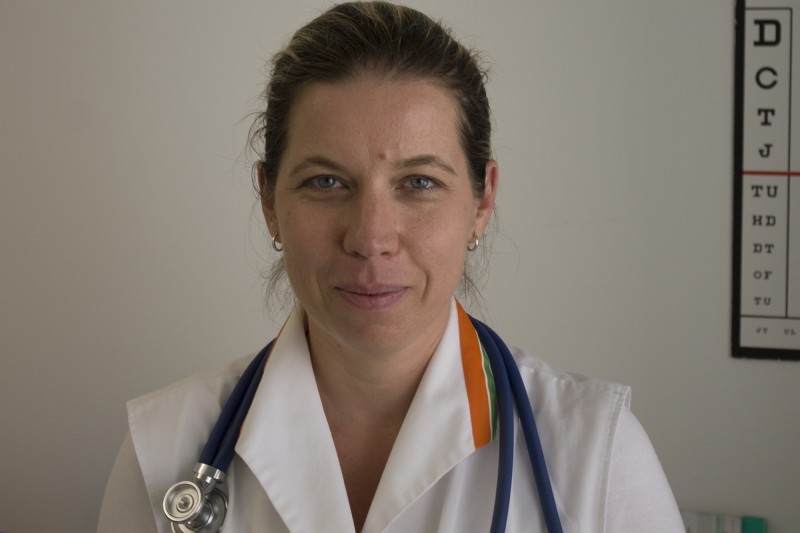 She wanted to be an actress and it shows: she gestures, she rolls her eyes, she is animated – it’s fun to watch the ‘theatre of Romana’. Her only problem is that usually her only audience is her assistant, and maybe a patient or two: she’s a doctor. A GP, to be precise, who mostly works with elderly people. ‘My patients don’t work, their mental health is declining and they have a lot of disorders. Usually they’re lying on their beds, so they’re immobile.’

Eyes rolling. ‘It is. But I like it, because this is a part of real life and real medicine.’

She gestures towards her assistant, sitting on the bench, amused. ‘I started together with my nurse. She had already been working in the same hospital department as myself for a long time. This department was specialized in caring for older people. It’s really what we have done since the beginning of our careers.’

And now you’re helping people from the neighbourhood?

‘Well, I’m new here. Because this practice was recently established, I don’t get many patients from the surrounding area yet.’

Her phone rings – many times. After a short conversation, she continues.

Romana’s last name is Compagnon, her husband’s name. Are there differences between you and, let’s say, a German or French GP?

‘For the same work, I don’t get paid as much.’ Eyes rolling. ‘I get a fixed amount of money per patient each month, from the company they’re insured with,’ Romana explains. ‘I don’t earn a lot that way. However, a small part of my income also comes from direct payments by patients. If an elderly patient wants permission to drive, for example, I need to do an examination. If that’s not covered by his insurance company, he has to pay for it himself. But if he doesn’t have enough money, I don’t ask him for it. I’m very social! It depends: I could ask for ten euros, but a colleague could ask for 25.’

But if you’re not paid that well, does that mean doctors have a bad image here?
‘Yes. Because there’s a lot of criticism of medical practitioners, coming from the media and society. People think that we don’t do our work as well as we should, or that medical experts make a lot of mistakes. The main problem is that our society’s healthcare system has been underfunded for years. A lot of money is spent on insurance, but we don’t know where that money goes, exactly. It’s not going to hospitals or used to pay doctors.’

Do you think it might be spent on big cars for the insurance companies’ bosses?
‘We honestly don’t know. But because medical staff isn’t paid enough, we don’t immediately have the required medicine and the hospitals are in a poor state, there’s a lot of misunderstanding. I think Slovakian doctors are very capable, but a lot of them don’t want to work here. You can already see that attitude when looking at medical students. Yesterday, I saw a journalist asking ten students if they want to work in Slovakia after their graduation. Eight of them said no. They don’t even consider working here. So almost every time a university’s medical faculty delivers a new doctor, he’s going directly to the west.’

How could you solve this problem?

‘The solution would be the insurance companies paying GP’s more. We need to change the rules of payment distribution. I can’t do an in-depth analysis, but I can say I get paid poorly for the job I’m doing, compared to what I’d earn in Germany or France. Why? I’m not worse than doctors in those countries.’

It’s really her point: the prejudice against Eastern Europe. ‘I think Western Europeans don’t know our countries and people. They seem to think we’re still living as we did in the past, so when they come here, they’re really surprised. It’s just that there isn’t enough communication between us, we’re not really interested in each other.’

People in the west might go to Prague or Budapest, though.

‘They think there’s not much here, however. No sights to see or anything. Young boys from London often make trips to Bratislava, only because it’s cheap to drink here. Not the kind of communication I’d like to see. They’re not here to discover the country or any monuments, but to discover the booze. And when I’m in Western Europe, I notice that western people only see us as Eastern Europeans. Changing that takes time, since we’re new EU-members.’

Do you feel European yourself?
‘Yes.’

In which ways are you different from an American or an African, you think?

‘When I travel around Europe, I don’t feel so many cultural differences. When I was in South America, I really felt it was a different world, with a different culture and a different way of life. I stayed with the family of a university professor, because I was a trainee, and I wasn’t very comfortable because they had servants and maids at home. I felt there was a big hierarchy, with lots of social differences and classes, in that society.’

Her phone goes off again. After answering it by muttering a single word in Slovakian, I ask her if she sees more differences or similarities within Europe. She has to think about that for a moment. ‘That’s a very difficult question. We may have similarities, such as our general lifestyle, while we also have small cultural differences. But I think we share the same ideals. Europe is very different now than it was ten years ago, I think we feel much more European these days.’

Why’s that, do you think?

‘Because we travel more and see other people. It’s a matter of time as well; we didn’t feel as European in 2004. It takes a while to become an EU-citizen, it doesn’t happen automatically if a country enters the Union. But I don’t want to regard Western, Central and Eastern Europe as being separate, that’s not good. We’re the EU and we should refer to ourselves as such.’