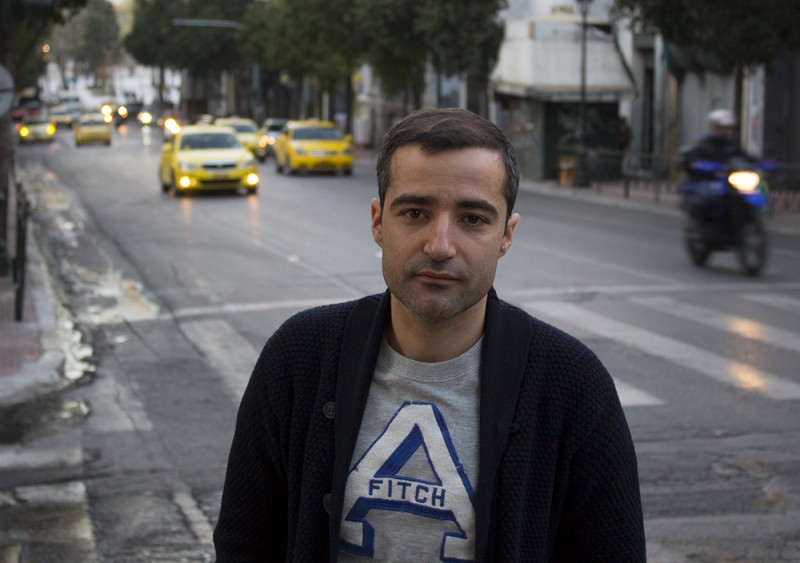 A common sight in Athens: a green bus is parked on the side of the street, its windows barred, its door open. Some of the policemen waiting in the bus are sleeping, and one of them stands in front of the bus, sternly guarding it with his shield leaning against his legs.

Earlier that week I asked two policemen who were smoking next to one of the buses. ‘Why are there so many of you?’

‘Because the president lives there.’ They pointed towards the next street, which was barricaded with concrete blocks. ‘And there is the Greek Central bank. And over there the Parliament.’

And even though they are with the riot squad, the tough guys, they’re not unfriendly. In fact they are quite easy to approach, and willing to talk, in English.

Spiro, 34, has fine features, kind eyes, and is quite slender. It is hard to believe he was once part of these riot squads. But he was, for more than 15 years.

‘I was quick, not strong,’ he says. ‘But I quit, because of a serious argument with my boss. Now I’m the chef in the police restaurant, cooking around 600 meals a day, for lunch. And 250 more for dinner.’

We are sitting in a café in the city centre. From time to time Spiro’s colleagues drive by, their sirens drowning out our conversation.

‘What was it like to be on the riot squad?’

‘The most difficult time was in December 2008, after that young boy was killed.’

A 15-year old boy was shot – murdered – by two Athens policemen after an ‘exchange of verbal abuse’. This led to waves of protest, lasting more than 25 days.

‘The riots became more vicious then. The things we got thrown at us became worse and worse: the Molotov cocktails were filled with phosphorus, so they were almost impossible to extinguish. You had to run like an ant, when you were hit with that.’ He gets up and demonstrates how to beat these fluids off your clothes. ‘People from other countries came to join the riots, but also to plunder,’ Spiro says. ‘People called us killers. It was a critical issue, a lot of things changed. The way we treat people – and the way people see us. Before, maybe half of the Greek population respected us, after it was less than 30%. Sometimes colleagues showed up at work with self applied bandages, because doctors refused to help them. We had to change and we did.’

Somehow I believe him.

‘We changed the structure, the procedures. Before, if we were attacked, we responded immediately. Now we waited, waited, even though we were provoked. It was difficult, I have to admit. You know, we didn’t decide; we were at the lowest level and simply had to carry out orders.’

‘Has it changed your image, did it work?’

‘We’ve come a long way, you have to know… We were hated under the dictatorship: we were helping the army until 1974. And the guys who were harassed by the police are now in the parliament, or in the media etc, they are journalists. They still have revenge in their heads. But in general, yes. I think the Greek police are quite okay, compared to other countries. I‘ve seen Turkish and Russian police, but that’s a different story. But also France, UK, Amsterdam. In France I was a bit afraid when I saw the police there, with their machine guns. They looked very aggressive. You know, most of us speak English, and here we speak that with foreigners, not in Italy or France. They understand it, but they won’t speak. So arrogant. No, I don’t think we are bad people. Most of us came from small villages. Like me, I was looking for a better future: my two brothers went into the army, I joined the police, so by the age of twenty I had a salary, I was independent. That was the main reason, not idealism, to be honest.’

‘What about the Golden Dawn? I read it was linked to the Greek police. What’s the story there?’

Golden Dawn was an extreme-right political party, considered neo-Nazi by some. After many of their members were arrested, some for murder, the party was declared an illegal organization.

‘I saw an interview on Sky News, where one of the leaders said that 90% of the Athens police were with them. And the others took it seriously. It’s not a lie, but it’s a half truth,’ he says cryptically. ‘Greeks in general aren’t xenophobic, most Greeks are fine with immigrants, for the simple reason that many Greeks are immigrants too. In every family there are people who have left the country, or have returned successfully.’

He tells me about his job, what it was like sitting inside these buses (‘I needed the bars, I couldn’t breathe outside.’) and about Sundays. ‘For normal people it is the day to rest and see the family, for us it is the busiest day: we have to work at a football stadium. Half of the clubs in the top league are from Athens.’

‘Were you never afraid?’

‘Yes, I was, it could be a really stressful job. It is not nice for a squad of 11 guys to be up against 2,000 football supporters.’

‘No, no, no! We don’t carry guns when we are there. We have the shield and the helmet, and okay, we have some chemicals, tear gas.’

Again he gets up, now to demonstrate how to defend a small corridor. ‘If one guys goes back, the others go with him – it’s like dominos. And if it doesn’t work: run. I had to, many times. We have the most difficult riots. Police came to Greece from Finland and Germany to be trained in how to deal them: we are the most experienced. Even now for the World Cup, in Brazil, we were sent there to train.’

Spiro is remarkably mild about the supporters and the riots: ‘Going to the match, the shouting, maybe the fighting too, has a function, it is like going to a shrink. It’s tradition. We’re passionate. The most passionate fans in the world.’

Change of subject: Europe. He kicks off with some negative remarks about the European Union: ‘They forced Croatia to become a member, to have more under their boots, you know, more countries.’

‘But how did they force Croatia?’ I ask.

‘Economically. That’s the way these days to occupy a country. Debt is the best way. Greece is selling out too. To Arabs and Germans, to Chinese who are coming to buy the nicest hotels, the best areas.’

Followed by pride about his country: ‘We gave the light of civilisation to the world, that’s a fact. You know, we ARE in Europe. People come here, we go to see other European countries, and not Russia or China even though we could easily go there. But Europeans stay within Europe for their holidays, I think that is because we have a lot in common.’

‘The language, for example. English has a lot of Greek words in it, did you know that?’

My knowledge of ancient Greek is rusty, and I know no Modern Greek at all.

‘How is your life now? Less stress?’

‘Yes… Although having to make 600 meals for lunch can be stressful too.’